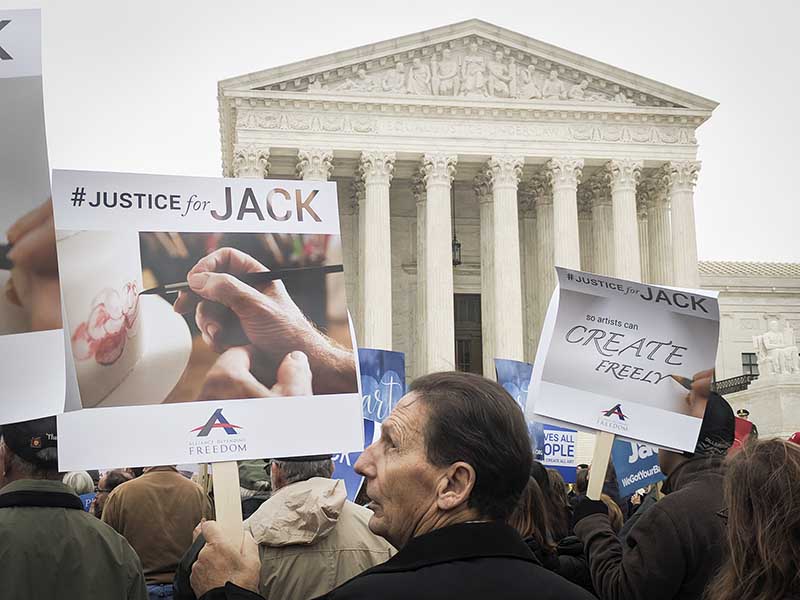 Christian activists gather outside of the Supreme Court in support of Colorado cake baker Jack Phillips on Dec. 5, 2017. (RNS/Chris Mathews)

In the space of 48 hours, Americans got another taste for the raging battles over LGBTQ protections:

On Tuesday (Dec. 18), Jack Phillips, owner of Masterpiece Cakeshop in suburban Denver, was back in court arguing that the state of Colorado is punishing him over his refusal to bake a cake — this time celebrating a gender transition. (In June, the Supreme Court ruled in his favor when he refused to bake a cake for a gay couple.)

For some religious conservatives, especially evangelicals, the best way to fight LGBTQ protections is to challenge them in court. Earlier this year, a group of five Wisconsin churches sued, seeking exemption from a municipal nondiscrimination ordinance protecting gender identity. Last week, a county judge agreed.

As 2018 comes to an end, many evangelicals find reason for hope: The Supreme Court ruled in favor of the Colorado baker. And the Senate confirmed Brett Kavanaugh to the Supreme Court, cementing a conservative majority on the bench.

But now other evangelicals say that may not be the best way.

Last week, World Magazine reported that two respected evangelical institutions, the National Association of Evangelicals and the Council for Christian Colleges and Universities, both quietly adopted a set of principles that call for comprehensive religious freedom protections combined with explicit support for LGBTQ protections in employment, education, housing and adoption, among others.

Neither group is backing down from the belief that marriage is between one man and one woman. But the two groups want to work toward federally recognized protections for sexual orientation and gender identity alongside strong religious exemptions.

Specifically, they plan to soon unveil a draft of a bill they are working on with input from legal scholars, theologians and LGBTQ advocates that they say accomplishes those goals. The evangelical groups hope several members of Congress will sponsor the bill, tentatively called "Fairness for All," in the session that begins Jan. 3.

"Fairness for All says we have to do this together because there are interests on both sides that ought to be protected," said Stanley Carlson-Thies, director of the Institutional Religious Freedom Alliance and a consultant in discussions about a possible bill.

The bill, which the National Association of Evangelicals and Council for Christian Colleges and Universities have been working on for upward of three years, is still being finessed. A National Association of Evangelicals spokesperson declined to comment on the bill and a spokesperson for the Council for Christian Colleges and Universities only spoke on background.

But their efforts will face stiff opposition from fellow evangelicals.

Already, leaders and institutions, from Russell Moore, the chief ethicist for the Southern Baptist Convention, to the Heritage Foundation and the Alliance Defending Freedom, have sharply criticized it.

"Placing sexual orientation and gender identity as protected classes in this kind of legislation would have harmful unintended consequences, and make the situation worse in this country, both in terms of religious freedom and in terms of finding ways for Americans who disagree to work together for the common good," said Moore, who heads the Ethics and Religious Liberty Commission, an arm of the Southern Baptist Convention.

But others, such as Johnnie Moore, one of President Trump's evangelical advisers, are open to the idea.

"I have chosen — as a conservative and a religious liberty advocate — to not hyperventilate at theory, but to take the approach of listening, being in the relevant conversations and certainly not doing things like prejudging legislation I haven't seen," wrote Moore in an email to Religion News Service.

Leaders pushing for a legislative solution point to the "Utah compromise" as an example of the kind of law that could work nationally. In that state, a bipartisan anti-discrimination law that strengthens religious freedom and protects LGBTQ people from discrimination passed in 2015.  So far, it has not drawn legal challenges.

And they say a compromise bill would be far better for religious objectors than the Equality Act of 2017, which the next Congress, with a Democratic majority in the House, is expected to take up. 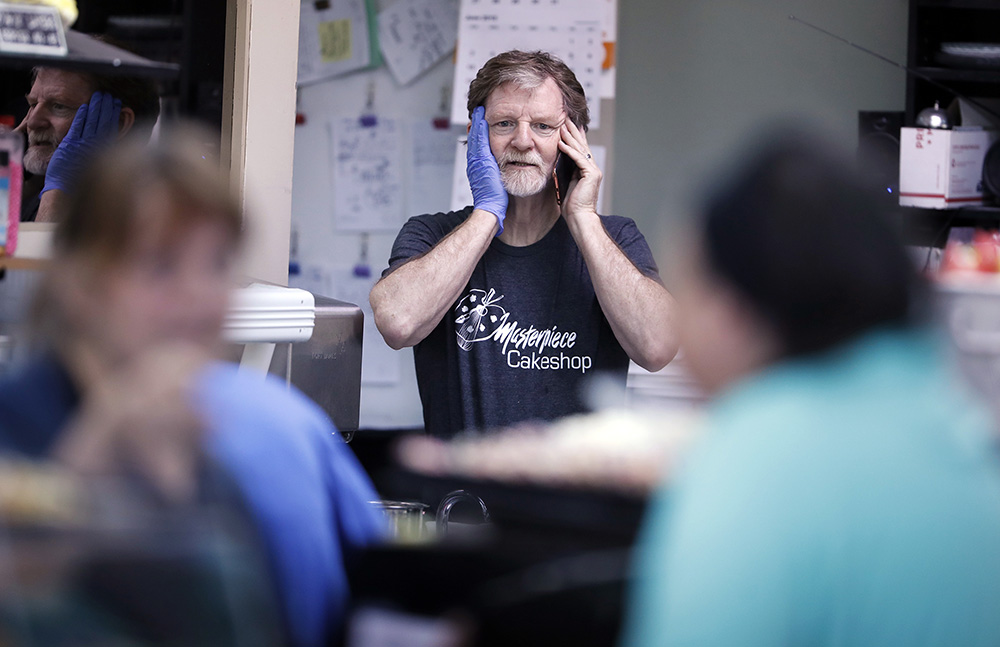 Baker Jack Phillips, owner of Masterpiece Cakeshop, manages his shop on June 4, 2018, in Lakewood, Colo. The Colorado baker is back in court again. (AP/David Zalubowski)

That bill, which Nancy Pelosi, the likely new House speaker, has indicated is a top priority, would create a uniform national standard for LGBTQ rights and discrimination protections. But it reportedly revokes any protection religious objectors might enjoy under the Religious Freedom Restoration Act.

"Those one-sided measures have not succeeded anywhere," said Robin Fretwell Wilson, a professor of law at the University of Illinois who helped Utah legislators draft their compromise law and has consulted for the National Association of Evangelicals and Council for Christian Colleges and Universities on their bill.

"The goal should be that gay people are treated with dignity in every respect and people who can't fully embrace it are permitted to step aside and no one is the worst for it," she said.

That the National Association of Evangelicals and Council for Christian Colleges and Universities are willing to compromise on LGBTQ protections is meaningful in itself, say some scholars. The two institutions might be described as more moderate on the evangelical spectrum, said John Fea, professor of American history at Messiah College in Mechanicsburg, Pa., a school that affiliates with the council.

"They're trying to thread a needle," Fea said. "How can we try to preserve our identity as faith-based institutions on sexual ethics, while at the same time embracing a more open evangelicalism that is critical of the way the Christian right tends to see politics and social change?"

But at a time of deep political polarization, when culture warriors appear ascendant, that approach may not ultimately prevail.

"We can write the rules," said Wilson. "But we have to actually decide to write them instead of always being at each other's throats."