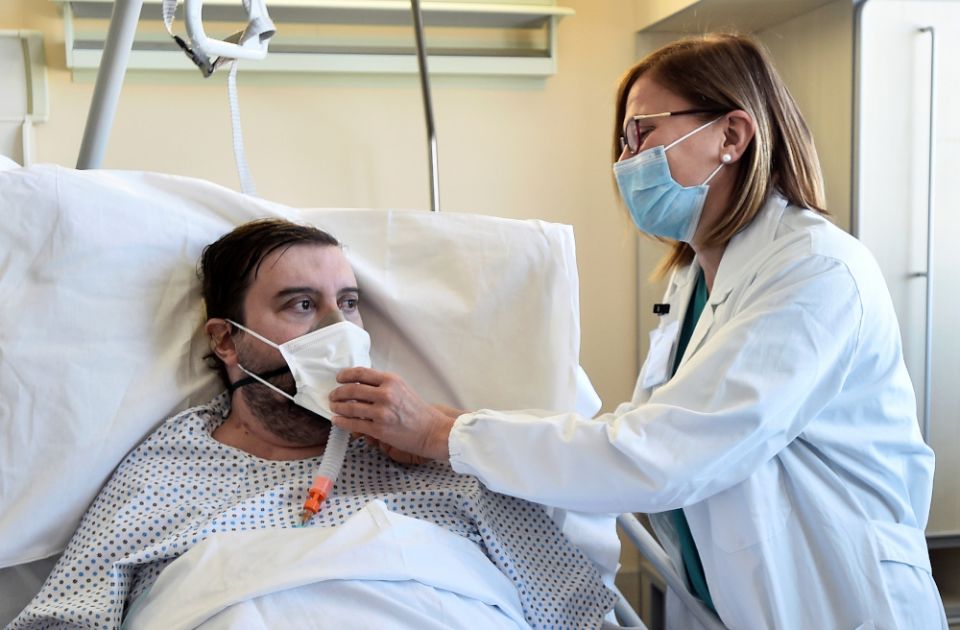 Geriatrician Federico De Luca is seen with Dr. Cinzia Gambarini as he sits up in bed after recovering from COVID-19 at the Circolo hospital in Varese, Italy, April 9, 2020. Looking for a way to provide both spiritual and physical care on Easter, a group of Italian doctors received their bishop's permission to distribute Communion to those infected by the coronavirus. (CNS/Reuters/Flavio Lo Scalzo)

Vatican City — Looking for a way to provide both spiritual and physical care on Easter, a group of Italian doctors received their bishop's permission to distribute Communion to those infected by the coronavirus.

According to an article published April 15 by Avvenire, the daily newspaper of the Italian bishops' conference, six doctors caring for coronavirus patients at a hospital in Prato, located in Tuscany, presented the idea to the chaplain and subsequently received support from Bishop Giovanni Nerbini of Prato.

Nerbini made the six doctors extraordinary eucharistic ministers, allowing them to give Communion to over 100 patients on Easter.

"I cried with the patients. Hospitals are places of care, but we can't think of separating the body from the spirit," Filippo Risaliti, one of the doctors who distributed the Eucharist, told Avvenire. "I realized that in the fight against coronavirus, our effort is too focused on fighting the physical ills of the patients."

Risaliti said the idea was inspired by Pope Francis' call for doctors and medical professionals "to play the role of intermediaries of the church for people who are suffering."

"We are the only ones who could do it, since only we can enter those rooms," he said.

For patients who were on respirators and unable to physically receive the Eucharist, the doctors read a prayer at their bedside.

Risaliti told Avvenire that he and the other doctors understood the suffering the patients endure due "to isolation from affection and from relatives."

"They are lonely, suffering people, not only in body but also in soul," he said.

Another doctor, Lorenzo Guarducci, said that for them, distributing Communion helped to heal "a double separation" because "one of the tragic consequences of this pandemic is isolation, of both the sick and health care workers, from everyone."

Many doctors caring for those infected by the virus have been unable to return to their homes in order to prevent infecting their loved ones. Guarducci said he had not seen his wife and children in over a month.

"For me, giving Communion to the sick was a way to fill this void; this gesture allowed me to reunite with my loved ones through the Lord," he told Avvenire. "It was one of the most beautiful experiences I have lived in my life as a man, as a Christian and as a doctor."