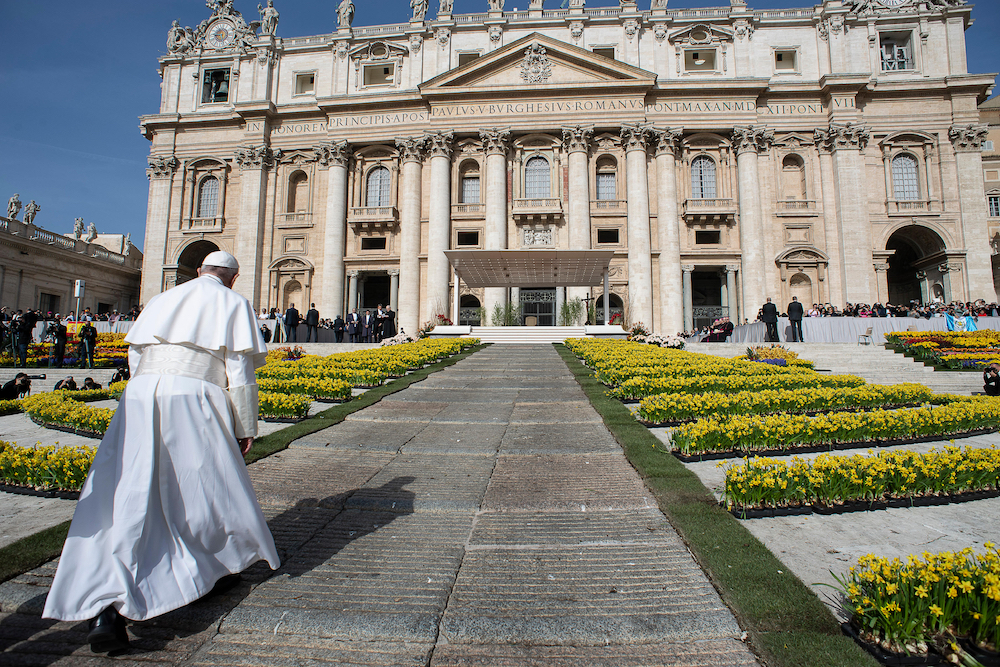 A group of Catholic scholars and priests has written an open letter to the College of Bishops accusing Pope Francis of heresy.

The letter, published by LifeSiteNews April 30, accuses Francis of a "comprehensive rejection of Catholic teaching on marriage and sexual activity, on the moral law, and on grace and the forgiveness of sins" and is framed as the third step in a process that began with a private letter to the cardinals and Eastern Catholic patriarchs in 2016.

While the 2016 letter from a similar group pointed out "heresies and other serious errors" promoted by Francis' apostolic exhortation Amoris Laetitia, and a 2017 "filial correction" asserted that Francis had "upheld" seven heretical positions, those signers stopped short of stating that the pope was guilty of heresy.

The April 30 letter goes farther, accusing Francis of the "canonical delict* of heresy," which the writers define in their summary as when someone "knowingly and persistently denies something which he knows that the Church teaches to be revealed by God."

They ask the bishops to publicly admonish Francis to "abjure" those heresies, including "repudiating and reversing" actions that have manifested heresy such as "nomination of bishops and cardinals who have supported these heresies by their words and actions."

If Francis does not repent, the letter asks that the bishops declare that he has committed heresy and must "suffer the canonical consequences of this crime." Those consequences should include removal from office, the writers argue in a section after the signatures that discusses canon law and theology related to papal heresy.

A Change.org petition inviting additional signatures had added over 1,500 names by mid-morning May 1.

Like the 2017 filial correction, the letter accuses Francis of seven heresies, including that people can intentionally break divine law in a serious matter without committing mortal sin, that sexual acts between divorced and remarried people "can sometimes be morally right," and that "God not only permits, but positively wills, the pluralism and diversity of religions."

As evidence, they offer a list of Francis' public statements on the truths of the faith, many from Amoris Laetitia, as well as a list of actions the pope has taken that indicate belief in the heresies they list.

Many of the "actions" are related to individuals that Francis assigned to important positions or that they allege he otherwise supported. They include those accused of committing or covering up acts of sexual abuse, such as former Cardinal Theodore McCarrick (whom Francis recently laicized for abuse of minors) and Chilean Bishop Juan Barros Madrid (whose resignation Francis accepted in June).

Individuals who have expressed support for LGBT Catholics or have said divorced and remarried Catholics should be allowed to receive communion are also listed as evidence of Francis' heresy; they include Jesuit Fr. James Martin, Cardinal Blase Cupich and Cardinal Kevin Farrell.

*An earlier version of this story misstated "delict" as "derelict"

A version of this story appeared in the May 17-30, 2019 print issue under the headline: Letter accuses Pope Francis of ‘canonical delict of heresy’.