Papal commission for protection of minors meets in Rome 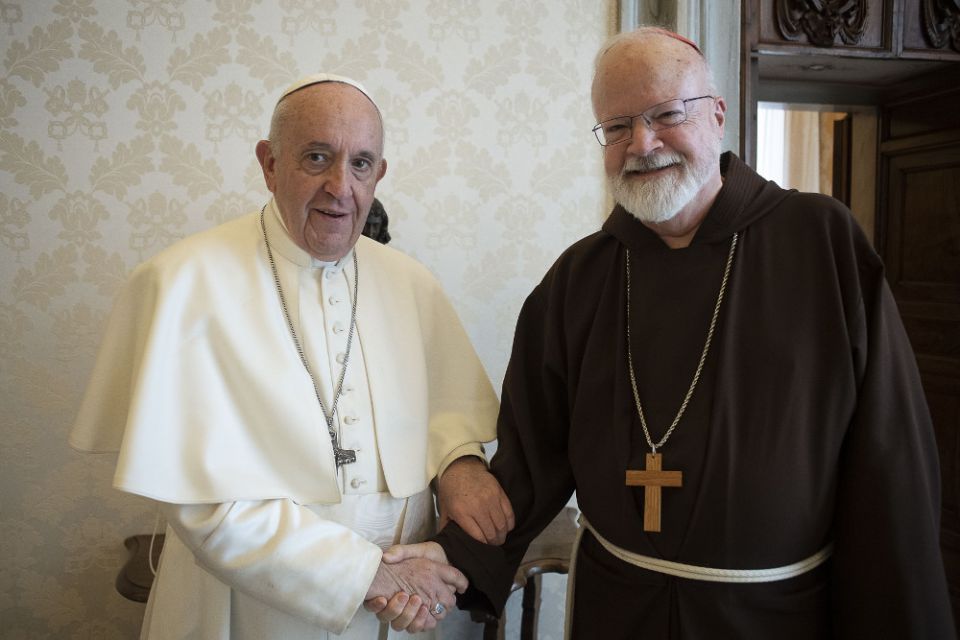 Pope Francis poses for a photo with Cardinal Sean O'Malley of Boston, president of the Pontifical Commission for the Protection of Minors, during a private audience at the Vatican April 4, 2019. O'Malley was at the Vatican for meetings of the commission and also the Council of Cardinals, a group that advises Pope Francis. (CNS/Vatican Media)

Vatican City — Cardinal Sean O'Malley told members of the Pontifical Commission for the Protection of Minors how much Pope Francis appreciated their efforts, particularly their proposal for a summit of leaders of the world's bishops' conferences and for the recently released safeguarding guidelines for Vatican City and the Roman Curia.

The commission met in Rome April 4-7 for its 10th plenary assembly, which was opened by its president, O'Malley, archbishop of Boston.

The cardinal "greeted members on behalf of the Holy Father" and conveyed the pope's "appreciation for the commission's assistance in initially proposing both the February meeting with presidents of bishops' conferences on the protection of minors and the recently published safeguarding guidelines and norms for Vatican City State, the Vicariate for Vatican City and the Roman Curia," according to a press release from the commission April 8.

It said feedback from the Feb. 21-24 meeting "indicates that the understanding of the critical role of safeguarding in the life and mission of the church is maturing. It also indicates that much remains to be done."

With its mandate to advise the pope and help local churches, the commission said it was working on a number of projects, including the creation of a "virtual survivor's advisory panel," which would be a way to listen to and learn from survivors "in a safe and culturally familiar space," similar to local panels already in place in parts of Brazil, Zambia and the Philippines, it said.

The commission is looking to create "an audit instrument," which would include an analysis of different models for monitoring the implementation of safeguarding guidelines to better help local churches create, implement, review and audit their efforts.

The commission also is planning an international seminar in December on "confidentiality and transparency with a particular emphasis on canonical penal procedures" and plans to cohost with the Archdiocese of Bogota, Columbia, a Latin American symposium on safe environments.