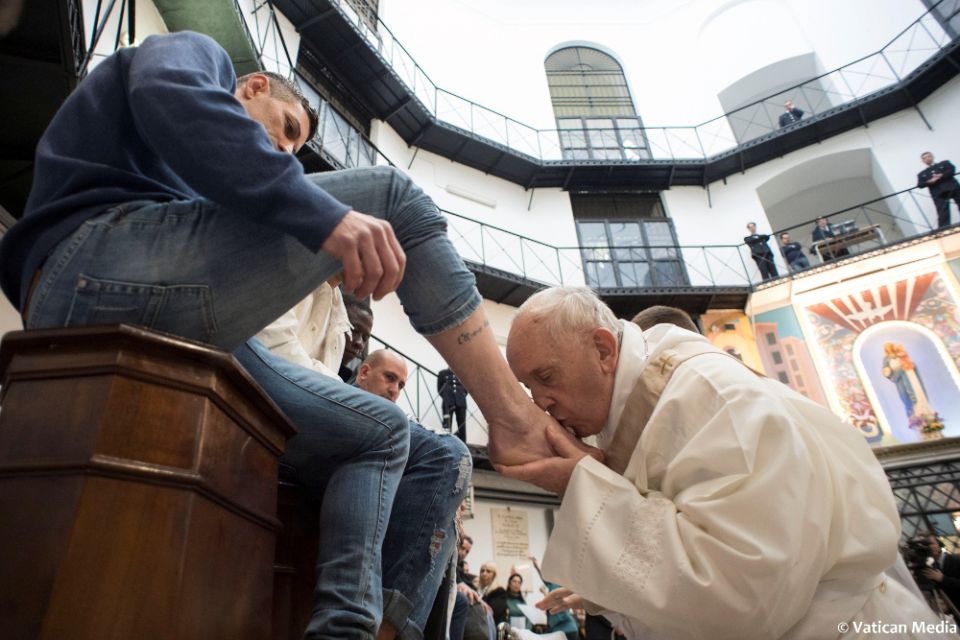 Pope Francis kisses the foot of an inmate during Holy Thursday Mass at Regina Coeli prison in Rome in this March 29, 2018, file photo. The pope will wash the feet of prisoners on Holy Thursday at Velletri Correctional Facility, about 36 miles south of Rome. (CNS/Vatican Media)

Vatican City — Pope Francis will celebrate the Holy Thursday Mass of the Lord's Supper with prisoners in Velletri, about 36 miles south of Rome.

The pope will celebrate the Mass and the foot-washing ritual at the Velletri Correctional Facility April 18, the Vatican announced April 3.

The late-afternoon visit will include a meeting with prisoners, prison staff, police and local leaders, as well as an exchange of gifts with the head of the facility.

The pope was to wash the feet of 12 prisoners, the Vatican said.

Pope Francis has made it a tradition to celebrate the Holy Thursday Mass with people who could not come to the Vatican or the Basilica of St. John Lateran for the celebrations.

His first year as pope in 2013, he chose a juvenile detention facility to celebrate Holy Thursday. The next year, he washed the feet of people with severe physical handicaps at a rehabilitation center. That was followed by men and women detainees at Rome's Rebibbia prison in 2015, refugees in 2016, inmates at a jail in the Italian town of Paliano in 2017, and prisoners at Rome's "Regina Coeli" jail in 2018.