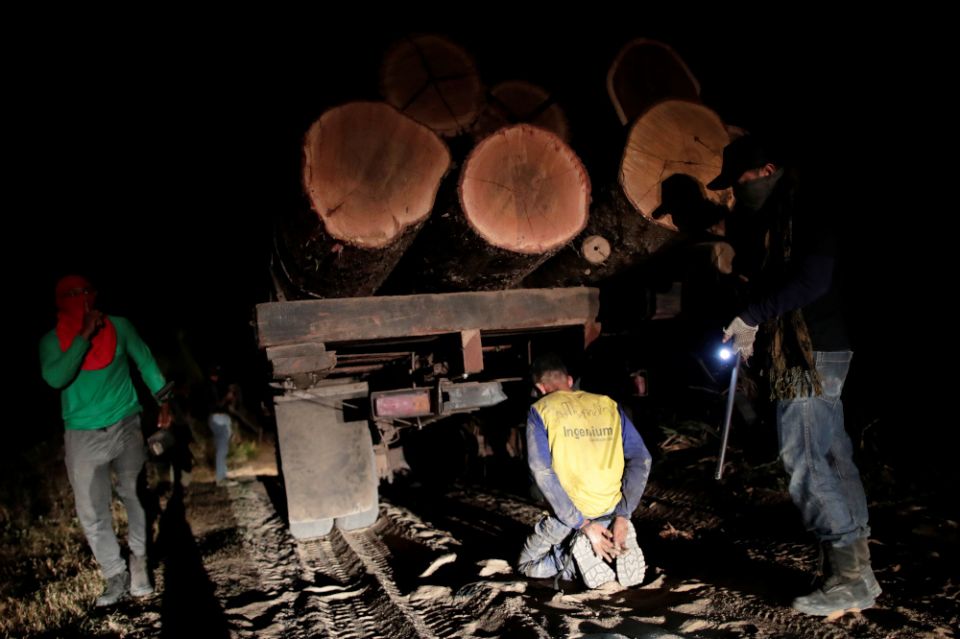 Guajajara "forest guardians" detain a logger during a search for illegal loggers Sept. 17, 2019, on Arariboia indigenous land near the city of Amarante, Brazil. Across the Amazon, but especially near the Brazilian-Peruvian border, incursions by loggers, miners, fishermen and farmers into indigenous territory are triggering violence.(CNS photo/Reuters/Ueslei Marcelino)

Rome — A series of violent events on the Amazonian border shared by Brazil and Peru has placed isolated indigenous people at risk, church workers say.

Dos Santos was known for his efforts to keep illegal loggers, miners and other unauthorized people from entering the Vale do Javari indigenous territory on the border between Brazil and Peru, according to Cristina Larrain, a Chilean missionary working with the Brazilian bishops' Indigenous Missionary Council.

"He was well-known and well-liked, because he was very good at oversight" of the indigenous territory, where he was part of the FUNAI team that protected it from outsiders, she told Catholic News Service.

The murder came just a month before Catholic Church leaders were to meet for the Synod of Bishops for the Amazon, to discuss "new paths for the church" in the Amazon. The synod will be Oct. 6-27 at the Vatican.

On Sept. 21, armed men attacked another FUNAI base in the Vale do Javari territory, the seventh such attack since November 2018, said the Union of Indigenous Peoples of the Javari Valley, an umbrella organizations of the territory's inhabitants.

"Many people are invading areas that are within the indigenous territory," Larrain said.

The Union of Indigenous Peoples has reported incursions by loggers, miners, fishermen and farmers who enter the territory illegally.

In a statement Sept. 24, the group said evangelical missionaries also had entered the area without authorization. The organization prohibits proselytizing by church workers within the territory.

The incursions bring the risk of violent contact between outsiders and indigenous people living in the reserve. There is also the possibility that outsiders will negotiate with indigenous villagers to engage in illegal activities like logging or mining, Larrain said.

The working document for the synod for the Amazon notes that isolated indigenous people are especially vulnerable.

"Many of them have chosen to isolate themselves because they previously suffered traumas; others have been violently pushed aside by the economic exploitation of the Amazon," said the document.

Contact with outsiders, even indirectly by touching clothing or other items, could also expose isolated people to illnesses to which they have no resistance. Throughout the Amazon, tribes have been decimated by such contact.

Such contacts "could be happening without anyone knowing," Larrain said. Even violent encounters between outsiders and isolated groups often go unreported, with news emerging months or years after the events.

Since dos Santos' murder, other FUNAI workers have left the territory, fearing for their safety, leaving too few people to protect it, said the Union of Indigenous Peoples of the Javari Valley.

The group blamed the lack of security in the territory on government policies that ease protection for indigenous rights and called on the administration of President Jair Bolsonaro to guarantee indigenous people's legal rights to their territories.