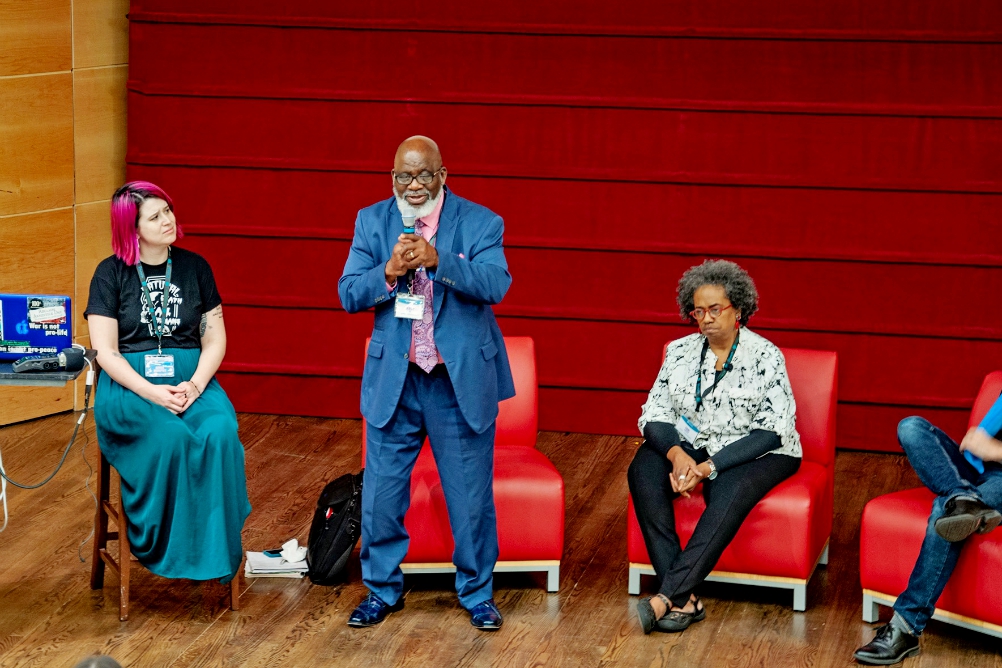 The late Cardinal Joseph Bernardin doesn't have any biological descendants, but his spiritual grandchildren converged on Loyola University here Oct. 18-20 for the sixth annual conference of Rehumanize International, a non-partisan, non-sectarian non-profit that stands against all forms of aggressive violence. The unorthodox range of programming, looking at violence as it manifests across abortion, war, the death penalty, hate crimes against the LGBTQ community, sexual violence, mistreatment of indigenous people, ableism and the threat posed by nuclear weapons, explicitly invoked Bernardin's "seamless garment" articulation of a consistent ethic of protecting human life.

The Rehumanize conference organized itself around the question of how individuals and societies can extricate themselves from the violent systems all around them. A central panel discussion on Oct. 19, "Leaving Violent Institutions," drew on the personal stories of a former executioner, a former abortion clinic worker and activist Thad Crouch of Veterans for Peace.

The panel quickly elucidated one central theme of the conference: that dehumanizing language is an on-ramp to violence. Jerry Givens, who served as the chief executioner for the state of Virginia for 17 years, executing 62 condemned prisoners during that time, said he was told that the men being sent to him on death row were animals. But, he noted, "I had yet to see an animal."

"It's easier to kill someone when you don't think about them as a human being," Crouch said of his own military training.

It was far from a conventional gathering of pro-lifers, though the campus pro-life group, Wolfpack for Life, sponsored the conference and Louisiana Right to Life operated a display table alongside antiwar groups and other activists.

"It's the kind of conference we would all want to go to," Madison Tuck, a senior at Loyola and president of Wolfpack for Life, said. The conference drew more than 40 people, many of them students from Loyola and other colleges in Louisiana, many of them women.

"It's so important to acknowledge how interconnected everything is," said Kara Wiggins, who spoke on the topic of suicide prevention.

Sarah Terzo, of Pro-Life Alliance of Gays and Lesbians, highlighted her own identity as part-Jewish, a person with a disability, a queer person and an atheist.

"As an oppressed class, LGBT people, it's not that hard to relate to another group of people that are denied their humanity," she said. "If those people can come together and defend one another, that's a very powerful thing."

"When I say pro-life, I mean the consistent life ethic. So I'm against the death penalty, against euthanasia, against unjust war," said Sophie Trist, a Loyola senior who has been blind from birth and co-founded Wolfpack for Life her freshman year. "Even though I am a Catholic and my faith is very important to me, I advocate more from a secular perspective, because I believe that in order to do the most good and be the most Christlike, you have to meet people where they are."

Aimee Murphy, executive director and founder of Rehumanize International, said working with a student organization was a boon to the work of her organization. She said that providing a space for the voices of students gave special energy to not only topics they are passionate about, but also highlighted the importance of hearing from marginalized voices in fighting dehumanization.

"One of the things I've learned this weekend is just passing the microphone," Murphy said. She characterized the conference as Ignatian in its insistence on seeing through the eyes of the other. "I think that something Pope Francis really gets at with his culture of encounter is listening, that humility to approach another person understanding their immeasurable and unchangeable dignity and seeing them as more than just an object of our imagination."

Alongside how systems of violence perpetuate themselves and each other, another motif that emerged was how, in U.S. history, the use of dehumanizing language to justify violent acts has oftentimes flowed from the very top of the halls of power — Andrew Jackson pursuing Indian removal, Woodrow Wilson screening the racist silent film "The Birth of a Nation" at the White House, and Harry Truman dropping the atomic bomb on the Japanese. The conference itself unfolded with the realities of family separations and detained children at the U.S.-Mexico border.

Economic and racial justice advocate Ismail Smith-Wade-El raised how having dehumanizing policies carried out by those in power can discourage people from seeking justice.

"The way we construct our identity has to do with internalizing labels. We are Americans. We are the descendants and the inheritors of so and so. We inherit certain ideas, values, self-evident truths from the Founding Fathers," he said. "And if they can appear to be made in a bad light, then so can everything that we constitute about ourselves, because we tend to constitute identity backwards. We are about where we've come from less than where we're going."

Rachel MacNair, a Quaker pacifist and vice president of the Consistent Life Network, raised in a presentation her theory of perpetration-induced traumatic stress, the idea that people who kill in situations such as war and law enforcement are even more traumatized than those who were victims of violence.

"In order to prevent all this, we have to get at the people who are causing it. And instead of saying 'You monster, you,' we need to be not dehumanizing them. We need to understand what they're going through as well," MacNair said. "It's a lot easier to be resilient when you're a victim. When you're the one causing the problem, where do you get your resilience from?"

This matters, she said, because, "Politics is chockfull of traumatized people," including people elected to national office whose decisions in policy matters harm others. Here MacNair noted that symptoms of trauma include detachment and emotional numbness. "If we understand that they're traumatized, we will gain insight that will enable us to make change."

Givens, the former executioner, posed the question during his panel, "You know how stressful it is to take the life of a person that didn't do anything to you?"

But the complicity in violent systems runs deeper than direct involvement or history. It's something Murphy of Rehumanize International feels acutely, herself occupying several "bridge" identities at once — family heritage that is both colonizer and indigenous, a pro-lifer sexual assault survivor, a Catholic who identifies as queer.

She added that trying to create justice from existing systems that are based in trauma and dehumanization that is deeply embedded is only going to create frustration. "If we want to authentically support life, we need to be upending our paradigms completely," she said.

"We're never going to be pure. We can't completely extricate ourselves," said John Whitehead, president of the Consistent Life Network, who spoke on the moral challenge of nuclear weapons. Whitehead acknowledged that the process of disentangling oneself from violent systems is complicated because changing one's morals is a challenge to one's identity.

"Once somebody makes that break, it's hard to make themselves understood to people who are still on the inside, because their vision's changed, their references are changed," he said. Noting that guilt is not a helpful motivator, he counseled, "Try to find what you can do where you are," whether that's bringing an issue like nuclear disarmament to the attention of one's legislators or finding an argument that's empathetic and close to the views of the person someone seeks to persuade.

Julia Smucker, a conference attendee and Consistent Life Network board member, said that everything she heard over the course of the weekend affirmed for her that issues of human life and dignity require a seamless witness.

"We should be outraged. We should be bothered by any affront to any person's human dignity," she said.

Read this next: Katrina Jackson offers glimpse of 'whole-life' politics in Louisiana