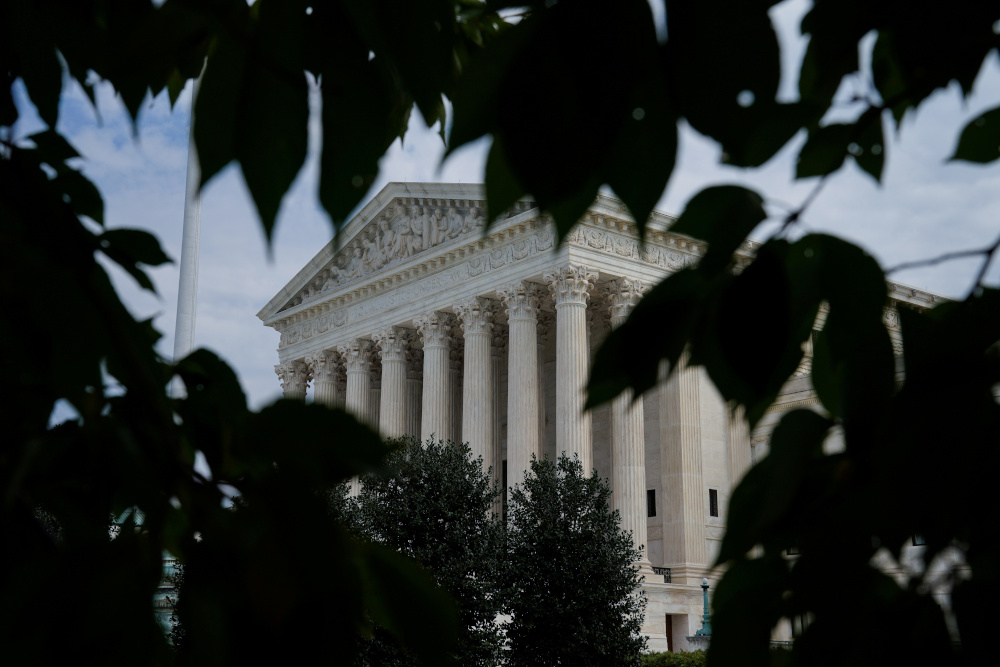 The exterior of the U.S. Supreme Court in Washington is seen Sept. 16, 2019. The upcoming Supreme Court term, which starts Oct. 7, will offer plenty of cases that Catholics will be paying close attention to including: the status of the Deferred Action for Childhood Arrivals, a number of religious liberty cases including a school-choice program in Montana and workplace discrimination based on sexual orientation or gender. (CNS photo/Reuters/Sarah Silbiger)

The upcoming Supreme Court term — which starts Oct. 7 — will offer plenty of cases that Catholics will be paying close attention to including: the status of the Deferred Action for Childhood Arrivals, a number of religious liberty cases including a school-choice program in Montana and workplace discrimination based on sexual orientation or gender.

The court also has a lot of hot-button cases in the wings that it hasn't decided yet if it will take them up such as: a Louisiana abortion law requiring abortion providers to have admitting privileges at local hospitals or if a city or state can require religious adoption services to place children with same-sex couples despite faith-based objections.

The court will look at a consolidation of three DACA cases. President Donald Trump has been wanting the high court to overturn appellate court rulings that have kept in place the DACA program initiated by President Barack Obama in 2012, which has protected nearly 700,000 people brought to this country as children, commonly known as "Dreamers."

Without action from the high court, the lower court rulings have been kept in place, blocking Trump's 2017 order to end the program where qualifying DACA recipients receive a work permit and get a reprieve from deportation and other temporary relief.

Federal judges who have blocked ending the program have said the Trump administration needs to provide a clear explanation of why the program should end.

The U.S. Conference of Catholic Bishops in 2017 called the cancellation of DACA "reprehensible" and said it caused "unnecessary fear for DACA youth and their families." The USCCB, along with several Catholic groups, organizations and religious orders, have since called for a solution to help these young adults.

Elizabeth Murrill, solicitor general of Louisiana, writing Sept. 13 in scotusblog, a blog about the Supreme Court, said: "The federal government should prevail in the DACA cases for one straightforward reason: DACA is unlawful. Courts should not — indeed, cannot — stop the executive from rescinding a plainly unlawful edict that the government never had the power to issue in the first place."

The DACA cases will be argued Nov. 12.

Another case of interest this year is about a school choice program in Montana that has barred all religious schools in the state from participation.

In a Sept. 17 telephone briefing with reporters, Mark Rienzi, a law professor at The Catholic University of America and president of Becket, a nonprofit religious liberty law firm, said last year's Supreme Court term was the "calm before the storm" as far as religious liberty cases go.

The court's main religious case last term was the 40-foot Peace Cross, which it ruled in favor of, saying its historical context did not endorse religion. That ruling, Rienzi said, signals where the court is headed, with an emphasis on "fostering a society where people of all faiths can live together."

In the upcoming term, he told reporters, the court has the opportunity to give clear answers on religious liberty issues, starting with Espinoza v. Montana Department of Revenue where the court will decide if excluding religious schools, including Catholic schools, from a state scholarship program violates the First Amendment. Montana officials said they left out religious schools because of the state constitution's Blaine Amendment, which bars public money from going to churches.

The case has a familiar ring, reminiscent of the 2017 case of Trinity Lutheran, a Missouri preschool that had been barred from receiving state funds for playground resurfacing using recycled tires because it was a church property. The court ruled it was unconstitutional to keep the school from using such funds.

Richard Garnett, law professor at the University of Notre Dame, wrote in scotusblog Sept. 17 that the Trinity case was "not really about recycled tires and safe playgrounds and was instead about vouchers, tax credits and scholarships for families who want to send their children to qualified, religiously affiliated schools," adding that school groups and others filed amicus briefs while tire and playground equipment companies did not.

"Trinity Lutheran, like Espinoza, was about pluralism, opportunity and fairness in education. School-choice programs are growing and expanding across the country, but broadly interpreted Blaine Amendments often deter or block reform," he added.

A friend-of-the-court brief filed by a group of Montana Catholic school parents, which outlined the benefits their children had received from attending local Catholic schools, urged the court to take this opportunity to declare state Blaine Amendments unconstitutional and "make clear that barring religious institutions and religion-exercising persons access to generally available public programs and benefits" goes against the Constitution and shouldn't stand.

No date has been given yet for this argument.

Luke Goodrich, Becket's vice president and senior counsel, said that if the court views these cases as discrimination, there will likely be new lawsuits and "massive liabilities with churches, schools and religious organizations" that expect their employees to follow certain standards, although there are exceptions, he pointed out for those in ministerial roles with a religious function. But no matter how these exemptions get interpreted, he said, there is likely to be a lot of confusion.

A big case that could be taken up by the court this year is Fulton v. Philadelphia, which centers on the city of Philadelphia's refusal, as of last year, to permit foster children to be placed with families that worked with Catholic Social Services of the Philadelphia Archdiocese. City officials made the decision after the agency confirmed to a local newspaper that it would adhere to Catholic teaching on marriage and would not place a child with a same-sex couple but would refer them to another agency.

The issue before the court is whether Philadelphia discriminated against Catholic Social Services and its foster parents by preventing the agency from serving children and families consistent with the agency's religious beliefs.

Another possible case about free exercise of religion concerns a florist who was sued for refusing to make floral arrangements for a same-sex wedding, with echoes of the 2018 Masterpiece Cakeshop decision.

Another potential case, not yet on any Supreme Court calendar, involves the Little Sisters of the Poor. After their 2016 Supreme Court victory exempting them from the contraception mandate of the Affordable Care Act, California, Pennsylvania and several other states sued in federal court to take away the sisters' exemption. This summer, the 3rd Circuit ruled against the Little Sisters in Pennsylvania and New Jersey.

Background material on upcoming cases by Becket, which has represented the sisters, describes this case as "Little Sisters of the Poor, Round 2."