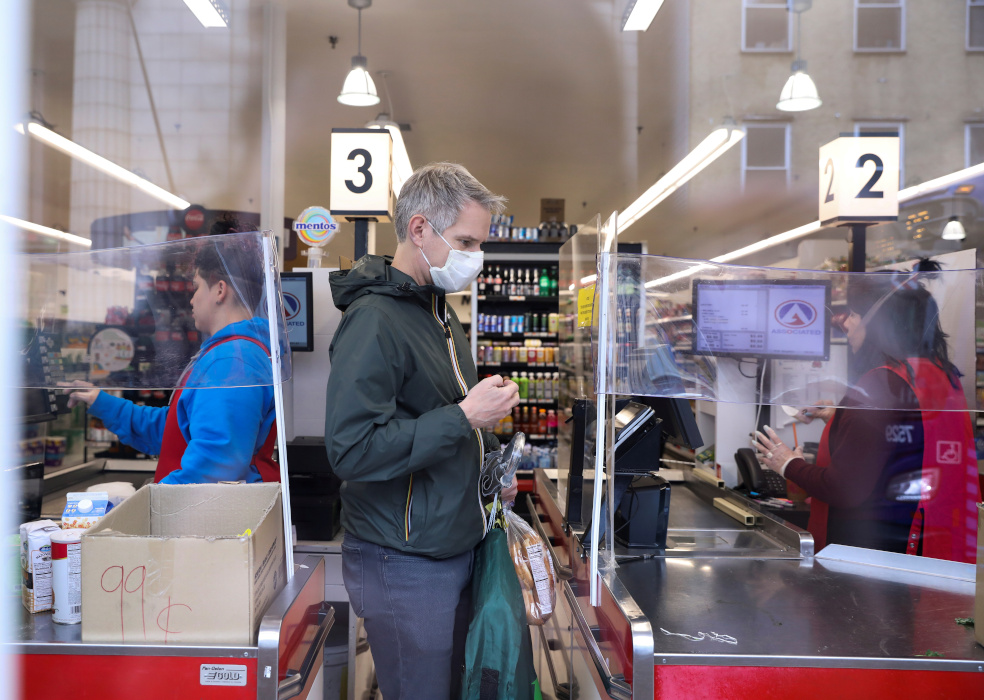 A man in New York City picks up an item at the grocery store March 28, 2020, during the coronavirus pandemic. (CNS/Reuters/Caitlin Ochs)

On the feast of St. Joseph the Worker, the Center for Migration Studies of New York released a new report highlighting the role of 19.8 million immigrant laborers who work in "essential critical infrastructure" in the U.S. during the coronavirus pandemic.

"In the midst of the pandemic and in the places where they are most needed, immigrants are working to stem the spread of COVID-19 and to sustain their fellow Americans — often at great personal risk," said Donald Kerwin, the center's executive director in a statement released with the report on May 1. "These same workers are going to be essential to the United States' economic recovery. They deserve our support and thanks."

The report says immigrants comprise 16% of all health care workers in the country, including 33% of health care sector workers in New York State, 32% in California, 31% in New Jersey, states that have been hard-hit by the pandemic.

The center based its findings on 2018 U.S. Census Bureau data. The report also points out that "immigrants work at high rates in essential jobs that keep Americans safe, healthy, and fed" especially "distressed states."

The report says that immigrants make up 31% of the country's agricultural employees, 26% of workers in food and beverage manufacturing and processing, 26% of grocery wholesalers, and 17% of retail grocery and food and beverage industries.

The report says that the "majority of the New York foreign-born essential workers — 1.04 million — are naturalized citizens, 458,400 are legal noncitizens (mostly lawful permanent residents), and 342,100 are undocumented."

The document was issued at a time when the Trump administration has been more strictly limiting immigration to the U.S., saying these measures are necessary to stop the pandemic.

Many also are janitors and building cleaners (41%), work in disinfection (33%), and 38% manufacture soap and cleaning compounds.

They also are in the state's transportation industry, operating buses, rails, and vehicles-for-hire, are gas station workers, or in warehousing, distribution, as well as agriculture and in food and beverage manufacturing and processing.

The center profiled immigrant essential workers such as Ismael Castellanos, a Mexican immigrant who has worked at a dairy farm in New York for the past seven years and lives in employer-provided housing with four others.

The farmworker said that while his employer provided masks, disinfecting gel, and transportation to buy groceries, not all employers are doing the same.

A group of U.S. bishops on April 29 called on government officials to consider the role and plight of U.S. migrant farmworkers during the coronavirus pandemic and made recommendations that include free testing and care should the workers test positive for COVID-19, the disease caused by the coronavirus.

They also expressed concern that since some of the farmworkers are "undocumented," their immigration status could make them more vulnerable to abuse as some would be reluctant to address overcrowding, lack of social distance in their work, transportation or housing and lack of protective equipment — conditions also highlighted in the report.

With New York and much of the country in lockdown, the center said, "immigrant workers are sustaining the economy and helping to keep Americans healthy and safe."

The report quotes Ismael, the farmworker, saying that while many U.S. workers are able to stay safely at home, earning much higher wages and "have a good job, own a house," they are able to remain calm while not considering "who is working day and night to ensure that food is available in their supermarkets and grocery stores ... we are the ones producing the food that arrives at their table."