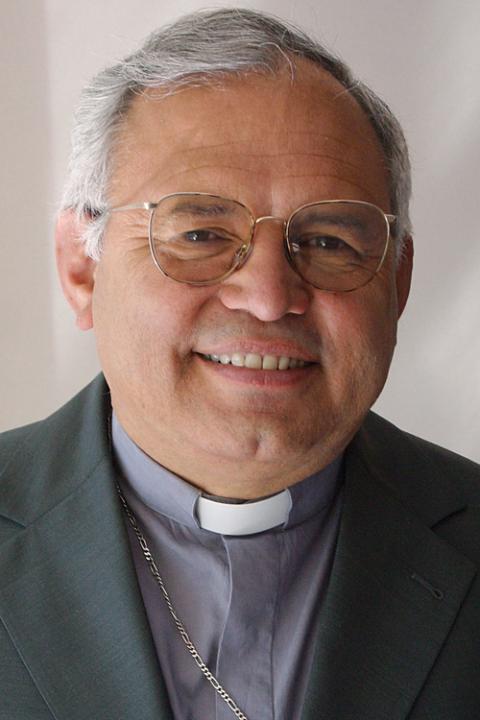 Bishop Álvaro Ramazzini of Huehuetenango, Guatemala, was one of 13 new cardinals named by Pope Francis Sept. 1. Cardinal-designate Ramazzini is pictured in a March 23, 2003, photo. (CNS/Mary Knight)

September 1989 was a bad month. In Guatemala City, bodies of murdered students lay where they had been tossed against the fence around San Carlos University. Rumors had it that things were bad too in the department of San Marcos, on the border with Mexico. With two other reporters I made the six-hour trip to find out what we could from the newly appointed bishop, Álvaro Ramazzini. Yes, people were being kidnapped — 12 during the month — and disappeared, he said, sitting across from us at a modest desk in a small office. He looked younger than his 42 years at the time, but terribly distressed, like a man personally responsible for his flock, which was under attack. He reminded me of a priest I had visited a few years before in a highland town, who pulled from the bottom drawer of his desk a ledger where he wrote in a fine hand the names of men in the parish as they were murdered or disappeared in the violence, so that there would be a record should peace ever come.

Eventually some 200,000 persons, mostly unarmed civilians, would die or disappear in Guatemala’s internal war, most of them at the hands of government forces. It was too late to drive safely back to the capital that day in San Marcos, so the three of us women reporters rented a single room in a lousy hotel, locked the door as well we could, and I, for one, passed the night in fitful sleep. I wondered how it must be for the bishop, continually dealing with the living violence in his diocese.

One day in Guatemala City, a delegation representing thousands of civilians who had fled the fighting and were living hidden in the jungle, made their way at some risk — the army considered them sympathetic to guerrillas — to our Foreign Press Club in the capital. (The club was not a safe place — our club president had been found murdered in his apartment, the next president had to flee the country after threats, and a small explosive device was once found by the club’s the door. Still, they came.) Soon after our meeting, we got reports that Ramazzini was visiting those forgotten people in the remote Ixcan region, despite fighting all around. Their delegation had also gone to tell their story to the episcopal conference, and it was Ramazzini who set forth into the no man’s land to visit the community. They were too fearful of being shot if they emerged and tried to go home.  A year and a half later, thanks to the work of the bishop and others, the government recognized the internal exiles as “non-combatant civilians” and they moved out of the shadows to live in safer zones.

When the war was over, the poor of the countryside vigorously fought against international mines that encroached on their land, and used toxic substances to extract metals. Ramazzini supported those who opposed the mines — locals said nobody had asked them for permission. "It's not the intention of the companies to divide the communities,"he told me in 2013. "But when they get government licenses they feel they have permission and that's all that's needed. They do not work with prior dialogue [with local residents]."

In 2018, as bishop of Huehuetenango, Ramazzini mediated between a hydroelectric project and communities it would affect; despite violence that arose in the early years of dispute, he helped broker an agreement that included representatives of Maya communities. Some indigenous held out in their opposition, but the agreement brought peace.

In 2013 I stayed at the monastery Our Lady of Wisdom of the Virgin of Guadalupe of the Poor Clares in Huehuetenango, to profile its foundress, a wonderful woman named Sr. Mary Peter Rowland. I discovered how much the sisters loved "our bishop" for the way he stood with the poor, his visits with them, and for the clarity and fullness of his message, including at Mass. His homilies carried content, they said, real teaching and illumination. "Not everyone who is ordained can preach, but how he can!"said Sr. Agnes Stretz. Rowland called him "a true man of God." In Huehuetenango this week, it did not surprise me to hear that, when Sr. Mary Peter became very ill on a trip to the motherhouse in Memphis, Ramazzini flew twice to be at her side, as she lay dying. A good man, I thought, has been made a cardinal.