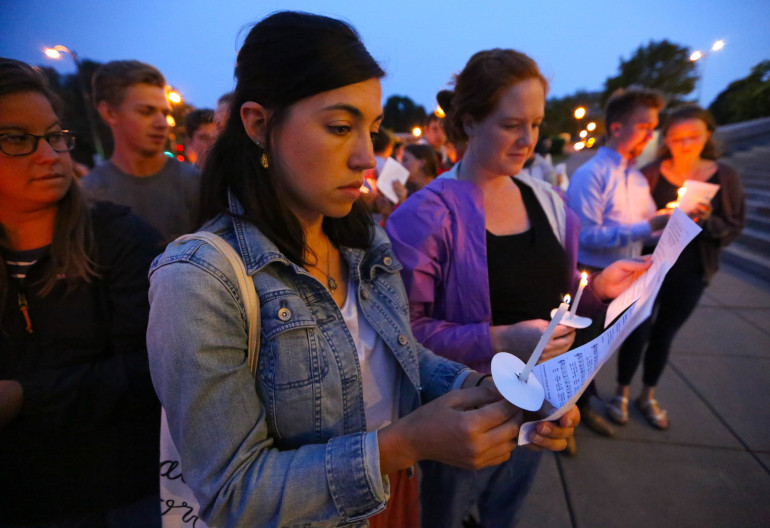 Over 100 young adults pray in front of the Cathedral of St. Paul in St. Paul, Minn., Aug. 20, 2018, during a vigil for survivors of clerical sexual abuse and healing for the church. (CNS photo/Dave Hrbacek, The Catholic Spirit)

Although major steps have been taken to help achieve healing and reconciliation with survivors of clergy sexual abuse, much work remains ahead for the U.S. Catholic Church, the chairwoman of the National Review Board told the spring assembly of the U.S. Conference of Catholic Bishops.

Citing the progress that has occurred since 2002 when the abuse scandal exploded, Suzanne Healy said in a prerecorded address to the bishops that the church's outreach efforts must continue to evolve as the needs of survivors are better understood.

"We must focus on the areas of healing and reconciliation, accountability, transparency and ongoing education for all involved in child and youth protection," said Healy, who has chaired the NRB since June 2020.

"You, as bishops and eparchs, have made significant progress over the years. And sometimes we can imagine that it may feel like it is never enough. However, as the pain of child abuse is lifelong, our efforts to heal, protect and restore trust will be lifelong," she continued.

Healy, former victims assistance coordinator for the Archdiocese of Los Angeles, told Catholic News Service prior to her report being given to the bishops that she and the NRB recognize how much bishops and dioceses have done "to further protection and healing for abuse survivors."

"We want to get out all the good things that the church is doing particularly in support of survivors. That's not talked about as much. There's a great deal of focus on healing for victim survivors and their families," she said.

In her address, Healy also said transparency remains a key concern of the review board. She thanked bishops and eparchs who have released lists of clergy with substantiated abuse allegations including those who are deceased and removed from ministry.

Such lists, she said, "are but one means of communicating to survivor victims that 'we hear you.' The victim survivor community has been clamoring for full disclosure of all such clergy for years and we have a long way to go to be as transparent as possible in this area."

Healy encouraged the bishops to "look at such lists as exemplary models of transparency."

She also said that in 2020, audits of dioceses and eparchies to ensure compliance with the "Charter for the Protection of Children and Young People" continued despite the coronavirus pandemic. The annual audits by Stonebridge Business Partners found 4,250 allegations of abuse were reported in 2020 and that the allegations are predominantly from the 1960s through 1980s.

In the first months of 2021, 22 allegations have been reported, she said. Healy told CNS that the 2021 figure is a preliminary figure.

All dioceses and all but a handful of eparchies participated in the audits, according to Healy.

A full report of the 2020 audit findings will be released in November, several months later than usual because of the pandemic, Healy added.

Healy also told the bishops the 13 review board members welcomed implementation in April 2020 of the Catholic Bishop Abuse Reporting service in response to Pope Francis' 2019 apostolic letter Vos Estis Lux Mundi ("You are the light of the world").

The document established procedures for reporting allegations of sexual abuse of minors or of vulnerable person by clerics, including bishops, or members of religious orders. The document also holds church leaders accountable for actions or omissions relating to the handling of abuse reports.

Healy suggested that an audit process be established for the system similar to that employed to monitor diocesan and eparchial compliance with the charter.

In concluding her remarks, Healy addressed the findings of the Vatican's November report on Theodore McCarrick, the onetime cardinal who was able to rise through the church's hierarchical structure despite rumors of sexual impropriety.

She said the NRB is working with the bishops' Committee on the Protection of Children and Young People on the report's findings related to systemic reporting failures, not placing the child or vulnerable adult in the center of every action, manipulation by the offender, instituting fraternal correction, and the handling of anonymous reports of abuse.