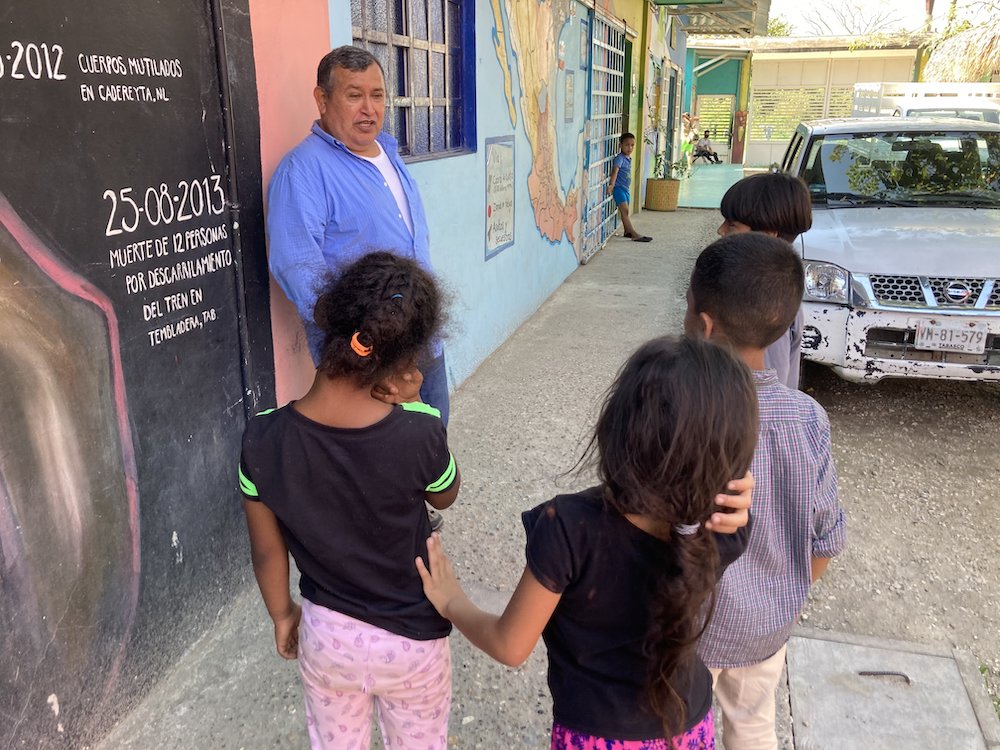 Franciscan Fr. Gabriel Romero chats with a group of young migrants March 27, 2021, outside La 72, a shelter in Tenosique, Mexico. The shelter has received 3,000 migrants monthly in 2021. (CNS/David Agren)

Franciscan Fr. Gabriel Romero recalled a machete-wielding mob trying to break down the door to his migrant shelter in the middle of the night early this year. The friar blocked the door with his burly frame and yelled: "Back off!"

"You can kill me, but I'm unarmed, and I'm not going to let you enter," Romero recalled telling the mob.

"They were paid by polleros," he said, using a word for human traffickers. "We want people here to be safe, that they feel it's a peaceful place. But when people leave, it's ugly out there."

Shelters like La 72, run by the Franciscans near the Guatemala border, offer a respite on a dangerous route for migrants to the U.S. border. Migrants unable to afford the services of smugglers often stay in shelters, but advocates like Romero say they end up paying plenty in the form of inflated fees for taxi and vans rides or bribes and extortion payments demanded by crooked public officials.

Romero said that smugglers offer to take them to the next town of Palenque for $250 and get them through police and immigration checkpoints, which were recently reinforced by the Mexican government as part of an effort to impede the path of migrants.

Many migrants end up walking, especially now that the trains on which they used to steal rides are no longer operating.

"[Migrants] arrive here with their feet all beat up," said Sr. Pascuala Medina Chávez, one of the Daughters of Charity of St. Vincent of Paul running the diocesan shelter in Palenque, some 45 miles from Tenosique.

They also arrive "without any money," she said. "At each checkpoint, with every taxi or van, they have to pay to pass through."

Migrants making it to Palenque say they paid private individuals and public officials for passage, while taxi drivers and van operators often prey upon them.

"I'm scared being here, but I don't have any other choice," said an 18-year-old staying in Palenque. He described paying a van driver an inflated fare, but was robbed of his money and dropped off far from his promised destination.

"The authorities ask you for money," said Ángel David, 25, a Honduran staying in Palenque.

Like many migrants, he left with plans of reaching the United States, saying he left "to build myself a house. I only am coming to work a bit and then return" to Honduras.

Both shelters in Palenque and Tenosique report receiving more migrants than they can host, with many staying in the vicinity and receiving meals.

La 72 has welcomed 3,000 migrants monthly in 2021, Romero said. That figure puts it on pace to break its previous record of 15,000 guests served in 2018, unless the exit slows from Central America — or a recent Mexican government announcement to restrict border travel due to COVID-19 proves effective. 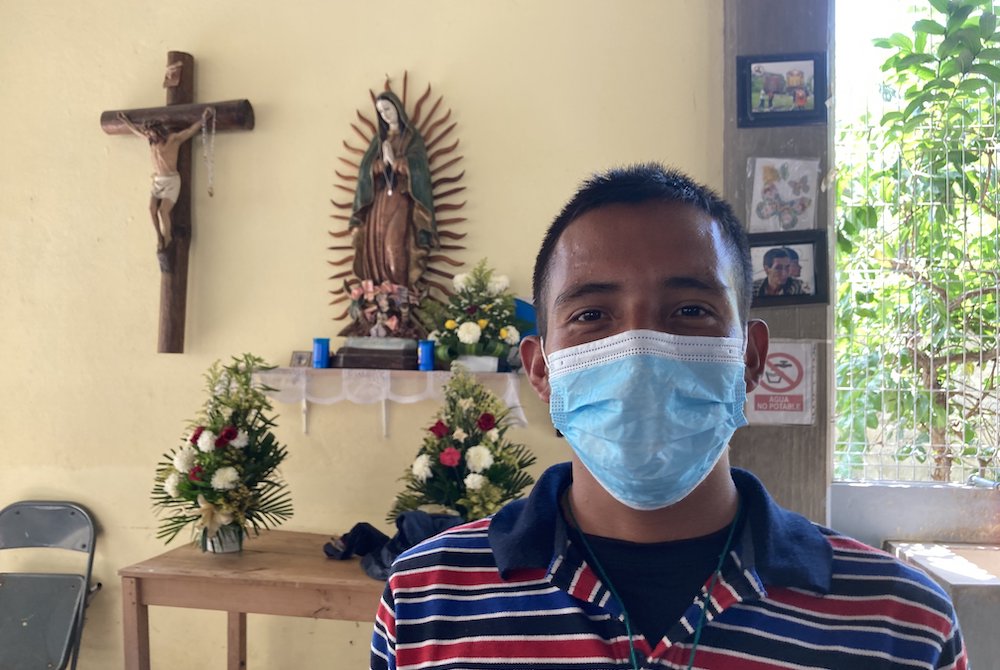 Honduran migrant Ángel David, 25, poses for a photo March 27, 2021, at the diocesan shelter in Palenque, Mexico. He wants to reach the United States in order to work and build a home for his family back in Honduras. (CNS/David Agren)

A team of Franciscan sisters from Mexico City arrived recently as reinforcements.

Migrants have streamed out of Central America in large numbers this year, fleeing violence, poverty and the destruction of twin hurricanes. Some migrants cite political problems for their decisions to abandon Central America and risk Mexico.

The attraction of the United States and ability to earn dollars loom large, too. It's proved especially attractive since the inauguration of President Joe Biden, who promises to overhaul the U.S. immigration and asylum systems — moves that have been interpreted by some migrants as a signal to head north.

Staff at La 72 warn travelers of the risks and the situation in the United States, where authorities are telling single adult travelers and families they will not be allowed to enter. But it's a tough task, said Romero. He said his counterparts in northern Mexico ask him to dissuade migrants from trying to reach the U.S. border, where they often become stranded.

Asked why he hit the road at such a young age, José, 17, quietly said he wanted to get ahead. José, who gave only his first name, left Santa Bárbara in northern Honduras, where his family works as farmhands.

"My goal is to get to the United States," said José, one of 27 unaccompanied minors staying at La 72. "I want to work until I'm able to get ahead and my family is, too," though he left without telling his parents of his plans, he said.

José confessed to not hearing much about U.S. politics back in Honduras. And he said of the new president, "I don't think he'll make a difference" to migrants.

Another young migrant with copper-colored hair, Milton, 15, said he left his parents' small farm in Honduras with similar plans of getting ahead — but he also figured a new president would provide an opportunity.

"We heard that he's letting in children," said Milton, 15, who had to cut his journey short after calling home and learning of a family emergency. He headed back to Honduras with just 200 pesos ($9.80) in his pocket. 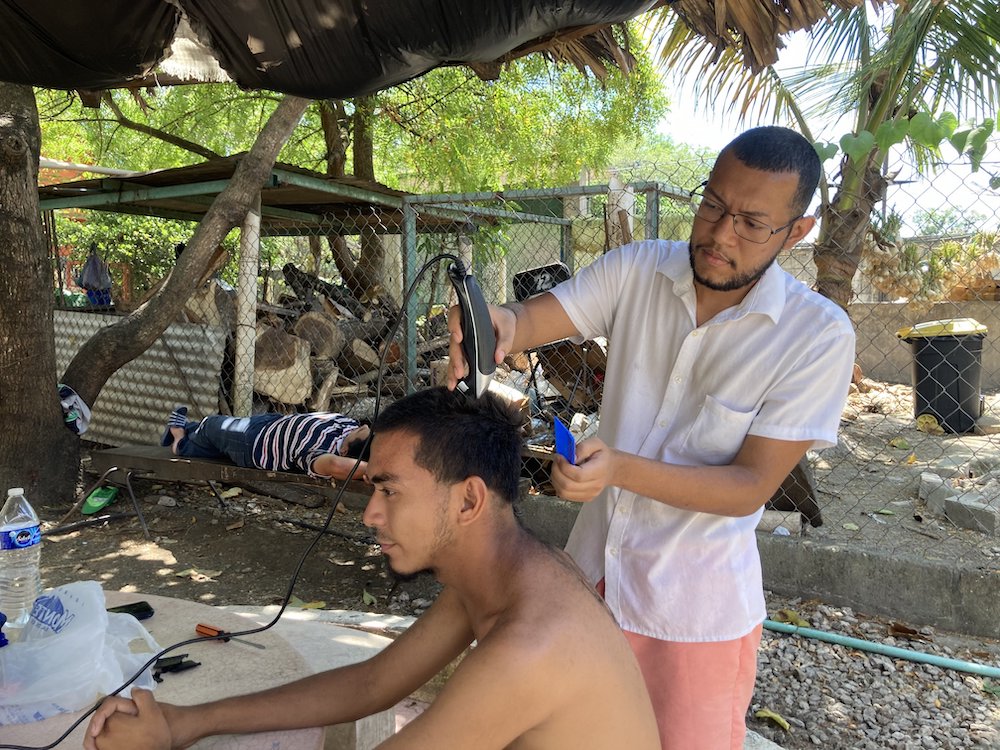 Adán, a migrant from Honduras, cuts the hair of a fellow migrant March 27, 2021, at a shelter in Tenosique, Mexico. The shelter provides a safe space for migrants traveling through Mexico, where they face risks such as kidnapping and assault. (CNS/David Agren)

Read this next: Lack of US plan for asylum-seekers tempers hope among migrants, advocates
A version of this story appeared in the April 16-29, 2021 print issue under the headline: On the road to US, migrants face smugglers, extortion, broken dreams.