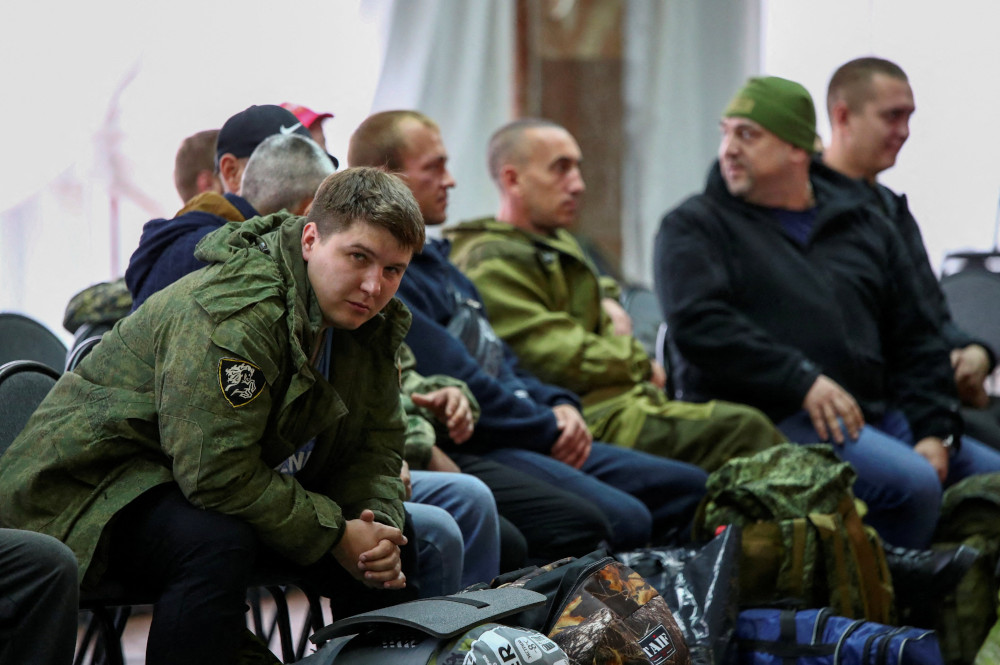 Russian reservists meet at a gathering point in the course of partial mobilization of troops in Volzhsky Sept. 28, 2022. (CNS photo/Reuters)

"The confrontation in Ukraine has grown into a full-scale military conflict and already claimed thousands of lives, undermining trust and unity between countries and peoples, and threatening the entire world's existence," the Moscow-based bishops' conference said in a pastoral letter.

"The permissibility of participating in hostilities is ultimately a matter for the human conscience, which belongs to the most secret and holiest part of man -- where he is alone with God, whose correct judgment he must always obey."

The letter, quoting the Catechism of the Catholic Church, was published Sept. 28 as Ukrainian forces continued an eastern counteroffensive, a week after Putin's announcement that at least 300,000 reservists were being called up to fight.

The bishops said their hearts were "filled with grief and powerlessness" at the inability to "decisively change the situation and prevent further victims," adding that the mobilization had confronted Catholics with a "most serious moral choice."

"Under certain circumstances, state authorities have not only the right, but also the obligation to use weapons, and to require citizens to fulfill duties necessary to protect the fatherland -- those who honestly do military service serve the common good," said the letter, signed by the conference's Italian-born president, Archbishop Paolo Pezzi.

"All of this is true if military actions aim at speedily ending a conflict and avoiding a multiplication of victims. ... On the other hand, the church reminds the state authorities they must find a just solution when a person, out of conviction, refuses to take up arms and is obliged to serve the community another way. This right is enshrined in the Russian Federation's Constitution, and we call for its consistent observance."

The bishops also responded to fears Catholic clergy could be called up to fight. They said it was "categorically impossible for them to participate in hostilities, in accordance both with ancient church rules and current international conventions."

"To all our believers, we renew calls for increased prayer and fasting for a just and secure world," the bishops' conference added.

"We ask priests to celebrate Holy Mass for preserving peace and justice, using the eucharistic prayer for reconciliation ... and including faithful petitions for the cessation of hostilities and preservation of human lives."

In a Sept. 22 Catholic News Service interview, a senior priest in Russia said Catholics were divided over the Ukraine war, with around 20% supporting it, 40% "categorically opposed," and a further 40% "watching to see what happens, especially if things get worse and family members are killed."