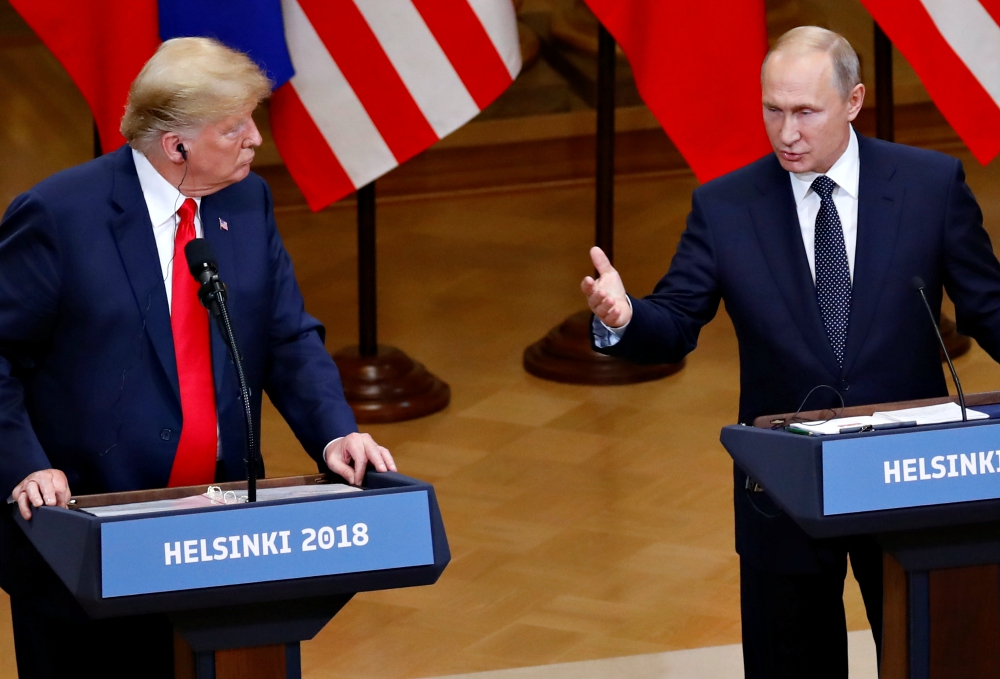 When President Donald Trump stood beside Russian President Vladimir Putin in Helsinki in July and said, "I don't see any reason why it would be" Russia who attempted to influence the 2016 election, the subsequent firestorm of criticism included liberals as well as prominent Republicans.

"I am a tea party conservative, that will never change. But Trump was a traitor to this country today," tweeted prominent conservative and former congressman Joe Walsh.

But there was one group that kept uncharacteristically quiet: the president's evangelical advisers.

"Let's pray for @POTUS @realDonaldTrump in these key meetings," Franklin Graham, who heads his late father's Billy Graham Evangelical Association, tweeted before the meeting. After Trump and Putin's press conference, Graham declined to critique the president (who would later walk back his remarks), only praising him for "pursuing peace above politics."

There are good reasons why some Christian right leaders are less than eager to address Trump's attempts to warm relations between the U.S. and Russia. For years, American evangelicals have cultivated ties with Russia, highlighted by a 2015 meeting between Franklin Graham, son of the late Billy Graham, and Putin in Russia.

Those ties are now facing scrutiny as, the day that Graham tweeted, news broke that the Department of Justice had charged Mariia Butina, a Russian national, for allegedly lobbying without registering as a foreign agent with the U.S. government. Authorities claim religion was a part of her scheme: Among the channels she was attempting to exploit, according to her indictment, was the National Prayer Breakfast.

Founded in 1953, with help from Billy Graham, the prayer breakfast has since become the mother of all Washington power breakfasts, with thousands of attendees packed into a ballroom at the Washington Hilton and a customary address by the U.S. president. Butina had been allegedly using the breakfast as a back channel for contacts between Russian and American faith leaders and politicians.

But it was hardly the only religious connection said to be targeted by Russian actors. Among Butina's contacts was a Russian politician named Alexander Torshin, and together the pair allegedly attempted to broker a meeting between Trump and Putin before the 2016 U.S. presidential election. The meeting never happened, but its proposed site was a "World Summit in Defense of Persecuted Christians" in Moscow, organized by Franklin Graham.

Representatives for Franklin Graham said he was unavailable for an interview with Religion News Service, despite multiple requests.

According to Russian Roulette: The Inside Story of Putin's War on America and the Election of Donald Trump, by Michael Isikoff and David Corn, the offer of a meeting between candidate Trump and the Russian president was made by Rick Clay, a conservative activist and one of Torshin and Butina's alleged "emissaries." 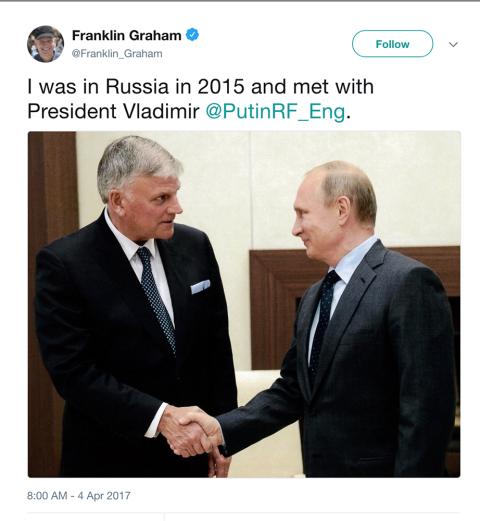 In an email to Jared Kushner in spring 2016, Clay reportedly pointed out that the "optics" of Trump meeting with Putin at an event with world Christian leaders "would devastate the Clinton campaign's efforts to marginalize Mr. Trump on foreign policy and embolden him further with evangelicals."

Kushner reportedly declined Clay's offer, warning him to "be careful."

The rise of Putin's God squad

Relationships between Russians and American evangelicals extend back more than three decades to Billy Graham's well-publicized visit to Russia in the mid-1980s. The World Congress of Families, a largely evangelical Christian group based in Illinois, was the brainchild of an American historian and a Russian Orthodox mystic, who met in Moscow in 1995, according to Mother Jones.

But the ties have escalated in recent years, due in part to leadership changes within the Russian Orthodox Church, but also because of political shifts that began in Russia in the early 2010s.

The Russian president's affection for the Orthodox church itself is relatively recent, said Kristina Stoeckl, an expert on the Russian Orthodox Church who teaches at Austria's University of Innsbruck.

"It's only since 2012, since Putin's third term as a president, that traditional values have become the center focus point of the Kremlin," she said. "Presenting Russia as the stronghold of traditional family values, (arguing) the West wants to change the definition of the family by giving rights to gay people and so on."

But by the time Trump was inaugurated in 2017, the Kremlin had become what Politico described as "the leader of the global Christian Right," largely based on an alliance with Russian Orthodox Church Patriarch Kirill — who has been accused of being a former agent of the KGB, or the main security agency of the Soviet Union — in an effort to deploy religion to exert spiritual and possibly political influence across Europe.

Graham's public relationship with Trump dates back to at least 2011, when he told ABC News, "The more you listen to (Trump), the more you say to yourself, 'You know, maybe the guy's right.' " The following year, Trump's foundation reportedly gave the organization named for Franklin Graham's father, the Billy Graham Evangelistic Association, a $100,000 check in 2012, while Samaritan's Purse, a Christian relief group also run by Franklin Graham, received $25,000 the same year and $10,000 in 2013.

Meanwhile, Putin's ideological influence over parts of the American religious right dates back to at least 2014.

In March of that year, Putin was featured on the cover of Decision Magazine, a publication of the Billy Graham Evangelistic Association, in an issue that included an opinion article by Franklin Graham that offered cautious praise for the Russian president. The evangelical leader pointed to Putin's decision to sign a law barring the dissemination of "propaganda of nontraditional sexual relations" to children.

"It's obvious that President Obama and his administration are pushing the gay-lesbian agenda in America today and have sold themselves completely to that which is contrary to God's teaching," Graham wrote. He later added: "In my opinion, Putin is right on these issues. Obviously, he may be wrong about many things, but he has taken a stand to protect his nation's children from the damaging effects of any gay and lesbian agenda."

Hilarion was no stranger to conservative religionists in the U.S. According to The Christian Century, Hilarion had visited America in 2011 to deliver a speech at the Catholic University of America, one of the most conservative Catholic schools in the country, and Dallas Theological Sem­inary, a prominent conservative evangelical institution. He also reportedly met with business leaders in Texas as well as former President George W. Bush.

In 2014, after meeting with Billy Graham in Montreat, Metropolitan Hilarion traveled to Charlotte, North Carolina, to the Billy Graham Evangelistic Association headquarters for a summit of Russian faith leaders and U.S. evangelical Christian leaders.

In Charlotte, Hilarion met with Galen Carey, vice president of government relations for the National Association of Evangelicals; Jeffrey Bingham, then-associate dean of biblical and theological studies at Wheaton College (now of Southwestern Baptist Theological Seminary); and Clint Arnold, dean of the Talbot School of Theology at Biola University, among many others.

Few of those at the meeting would comment on it, but the Rev. Richard Gibbons, pastor at First Presbyterian Church in Greenville, South Carolina, cited the Billy Graham Evangelistic Association's long history of forging alliances with Christians in other parts of the world.

"The idea was, 'How do we build bridges with the church in Russia to continue (Billy) Graham's work there?' " Gibbons said. 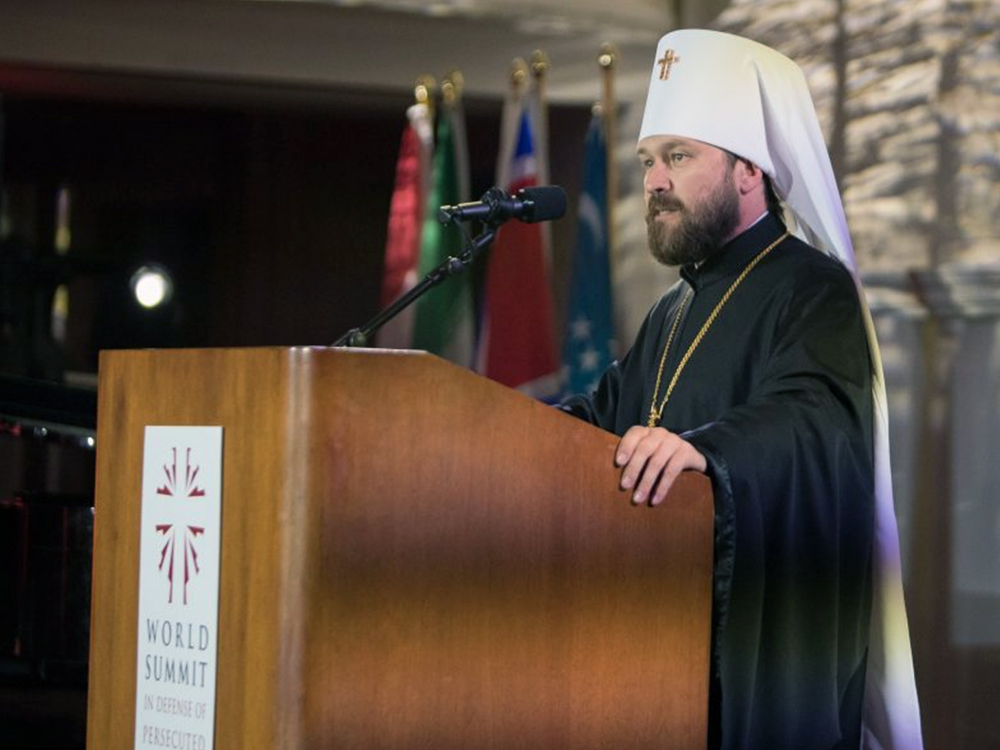 Metropolitan Hilarion Alfeyev of the Russian Orthodox Church speaks at the World Summit in Defense of Persecuted Christians in Washington, on May 11, 2017. (Photo courtesy Billy Graham Evangelistic Association)

But Don Fairbairn, academic dean of academics at Gordon-Conwell Theological Seminary, said he was "not particularly happy" with the "strongly pro-Russian stance" of the gathering.

"I cannot really say what the purpose of the event in Charlotte at BGEA headquarters actually was," he said in an email, noting that he almost canceled his own planned speech to the group.

Hilarion also addressed the gathering, twice condemning the "pointless language of sanctions" in response to the Russia's annexation of Ukraine and calling on all parties to "search for real ways of solving the problems accumulated during the confrontation."

According to Christianity Today, Hilarion and other Russian faith leaders then went on to meet in Washington with State Department officials, visit the U.S. Capitol, and gather at the offices of the National Association of Evangelicals. Graham told Christianity Today the effort was meant to "build bridges" between the U.S., Russia and Eastern Europe as the crisis raged in the Crimean peninsula.

Related: Why Mariia Butina wasn't the only Russian attending the National Prayer Breakfast 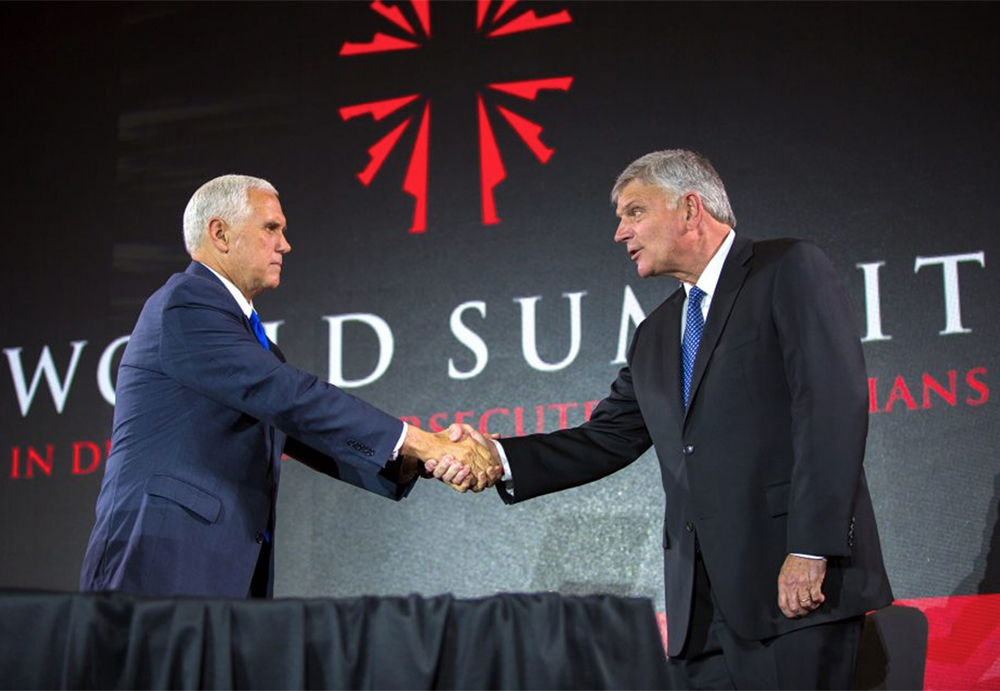 Talking to RNS about the meeting at the National Association of Evangelicals, Carey argued the events were focused on religion, given the long-standing presence of evangelicals in Russia. But he noted that while the association hosted a reception for the group, only evangelical members of the Russian delegation attended. The Orthodox members, he said, met elsewhere.

Carey added that while he didn't see any evidence of overt efforts to co-opt evangelical leaders at the meeting, he acknowledged that "of course, if people were doing things covertly we wouldn't know."

A meeting with Putin

Franklin Graham pursued his connections to Russia in person in November 2015, when he flew to Russia for a speaking tour of several churches. There he met with with dignitaries including Kirill. He also echoed Hilarion's distaste for sanctions during an interview with Russian television, saying, "I've never been a supporter of sanctions."

Before he left Moscow, Graham had an unexpected 45-minute meeting with Putin, during which Putin reportedly agreed to assist with the proposed summit on persecuted Christians in Moscow, the event that Torshin later offered as an opportunity for Trump to meet Putin.

Later rescheduled for May 2017 in Washington, the summit was attended by a large Russian delegation. Vice President Mike Pence addressed the gathering, and met with Hilarion backstage alongside "other religious leaders," according to Time magazine.

Hilarion did not specifically say what the two discussed besides terrorism, noting, according to Time, that "It is only one united, international anti-terrorist coalition which can combat terrorism and win." He also reportedly presented Pence with a book about Kirill.

Otherwise, the exact details of the conversation remain unclear, as do the identities of all present.