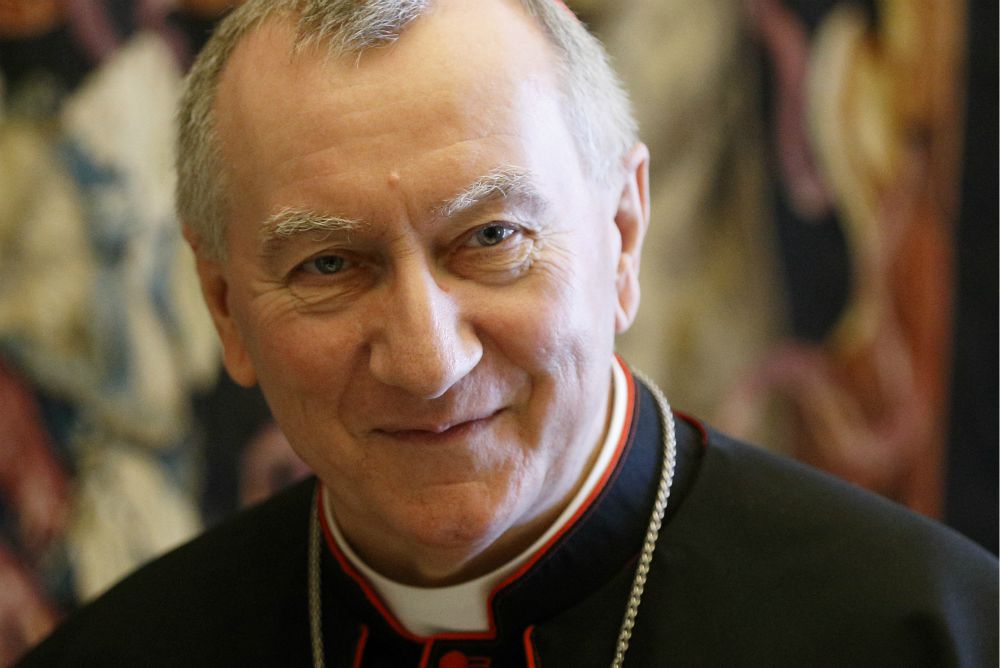 When Cardinal Pietro Parolin, the Vatican's Secretary of State, ended his official trip to Russia on Aug. 24, news reports were full of praise for the latest expression of closeness between Rome and Moscow. But there are signs that not everyone is satisfied with the aloof tone of the four-day visit — or confident about its benefits for Catholics.

"Judging by all the goodwill declarations, there's clearly been a warming of relations — but there's been absolutely no change in Russia's policy at home and abroad, and that's what most concerns people in this region," said Marcin Przeciszewski, director of the church's Catholic Information Agency in nearby Poland, which provided the most extensive coverage of the cardinal's tour. "Russia will have scored diplomatic gains in hosting a top Holy See representative. But with no concluding declaration or summary, and little real information available about his exchanges, it's open to question what the Vatican and church will have gained."

The visit was the first by a senior Vatican figure since Parolin's predecessor, Cardinal Angelo Sodano, travelled to Moscow in 1999, and the first on such a scale since Cardinal Agostino Casaroli's in 1990. It included talks with Patriarch Kirill, head of Russia's predominant Orthodox Church, and with President Vladimir Putin, and was accompanied by mutual pledges to build on links forged by the patriarch's historic February 2016 meeting with the pope in Cuba.

The trip sparked fresh anxieties among Greek Catholics in war-torn neighboring Ukraine, who were denounced by the Orthodox side during the visit, and misgivings among Russia's own small Catholic minority, whose church is not recognized as a "traditional religion" and still faces discrimination and hardship.

Catholics are currently put at 773,000 by the Vatican's Annuario Pontificio, barely half a percent of Russia's population, and are widely dispersed over a Moscow-based archdiocese and dioceses in Saratov, Irkutsk and Novosibirsk. 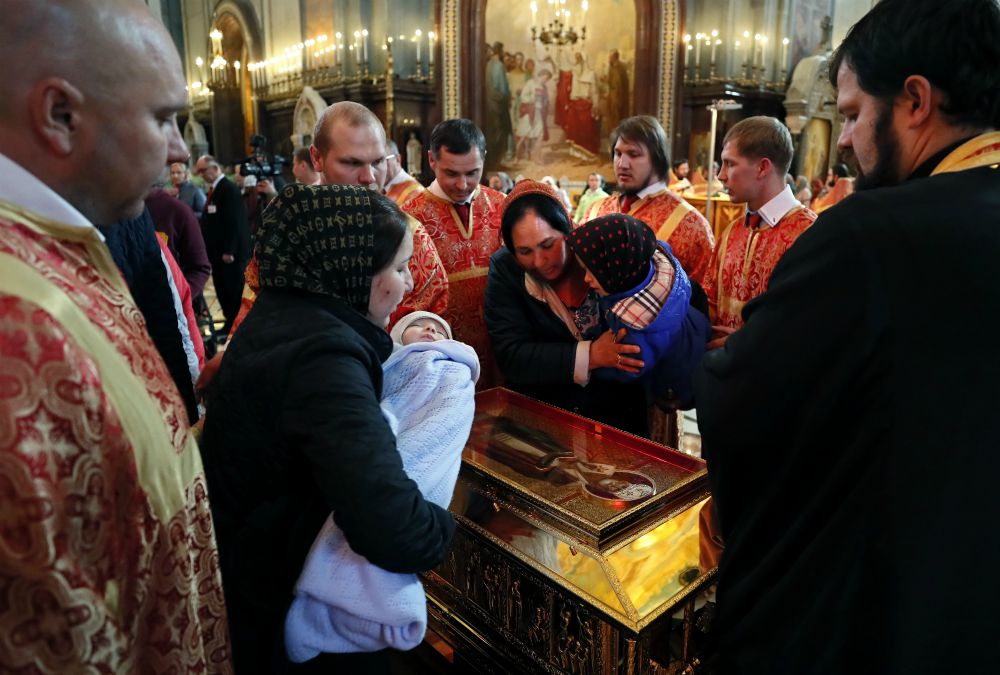 The run-up to Parolin's visit saw a flurry of celebratory inter-church contacts, during which Cardinal Kurt Koch, president of the Pontifical Council for Promoting Christian Unity, visited St. Petersburg to bring home relics of the fourth-century St. Nicholas, after they'd been viewed by over 2.5 million Russians during a three-month display, and Kirill was made an honorary citizen of Bari, Italy, where the relics are housed.

Also, the Russian Orthodox Church declared its backing for ecumenical ties in a new doctrinal catechism, its first for more than a century, while three-quarters of Russians said in a summer survey they'd favor a visit by the pope.

Msgr. Igor Kovalevsky, secretary-general of Russia's Catholic Bishops' Conference, said he also hoped for real progress on his church's practical problems, including the denial of permits to visiting Catholic clergy and the continued withholding of Catholic properties seized under Soviet rule. When Russia's Jehovah's Witnesses were banned as an "extremist organization" last April, with Russian Orthodox approval, Kovalevsky warned of "strong misgivings" that Catholics could now also face "new limits on freedom of belief."

This made Parolin's visit important for the protection of Russia's Catholics.

"We want to be more actively involved in the life of society here, and we count on Russia's church and government being more attentive in future to Catholic needs."

"The Russians understand the importance of relations with the Holy See — but in any dialogue, the local community dimension must be considered as well, not just top-level political and diplomatic questions," the priest told NCR before the visit. "We want to be more actively involved in the life of society here, and we count on Russia's church and government being more attentive in future to Catholic needs."

Just how Parolin will have helped at this level remains to be seen.

Since his 2013 appointment as Secretary of State, Parolin has also travelled to neighboring Ukraine, Belarus and the Baltic states, making his Russia visit a natural next step. Its highlights included talks on Aug. 21 at the Moscow Patriarchate's Danilovsky Monastery headquarters with Metropolitan Hilarion Alfeyev, who heads the Orthodox church's foreign relations, followed by a meeting the next day with Kirill.

Parolin also discussed cooperation with Russia's foreign minister, Sergei Lavrov, who agreed at a subsequent press conference that both sides now held similar views on "problems of our times," including measures to promote peace and reconciliation, combat "terrorism and extremism" and strengthen "social justice and the role of the family. 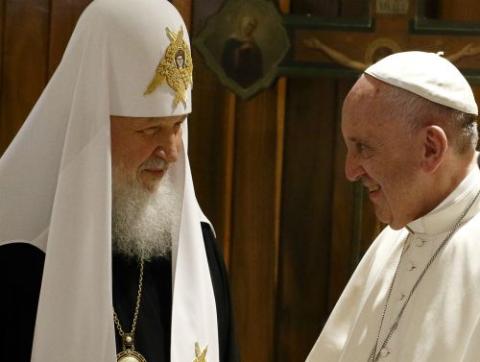 Meanwhile, a Vatican communique said the cardinal had met Putin "in a positive, cordial climate of respect and mutual listening," engaging in an "open exchange of views on various topics." The Russian president has visited the Vatican five times, meeting Francis in November 2013 and June 2015, and is expected to meet him again next January, when he opens a Russian art exhibition.

Besides current crises in the Middle East, Ukraine and Venezuela and the plight of persecuted Christians, Parolin said his Russian interlocutors had debated "a whole gamut of political issues," as well as "numerous cultural initiatives."

He also welcomed the "undoubted new dynamism" in Catholic-Orthodox ties, and said everyone had concurred that co-operation should become "ever wider and friendlier." Although the Vatican and Russia exchanged representatives during the 1991 collapse of the Soviet Union, they opened formal diplomatic ties only in 2009; so the focus on top-level relations is understandable.

But the cardinal also pledged to raise issues facing Catholics in Russia in a TASS news agency interview before his arrival, reiterating the promise during his visit to Gaudete-Ru, an online Catholic magazine. His first purpose, Parolin assured Gaudete-Ru, was "to meet with the local Catholic community."

"Each religious community needs a proper place, a church, a temple, to have the opportunity to profess its faith," he told the magazine. "This is a fundamental principle of religious freedom."

However, Parolin admitted the "very serious … urgent problem" of Catholic property restitutions and clergy work permits had been discussed long ago by Sodano. Speaking later to journalists, he confirmed that his concerns had been "heard with understanding" and said he hoped "concrete steps" would now follow.

He made no mention of the issues while preaching at Moscow's Catholic Immaculate Conception Cathedral during his only direct encounter with Russian Catholics. Instead, he lauded "the path of mutual rapprochement, brotherhood and cooperation" begun by Francis and Kirill in Cuba and urged Catholics to be "considerate, pliable and grateful."

In the event, the only practical step announced during the four-day visit was a mutual agreement, signed by the Vatican's nuncio, Archbishop Celestino Migliore, to waive visa requirements for Russian and Vatican diplomats.

Kovalevsky, the bishops' conference secretary-general, felt it necessary to issue a statement on Aug. 22, the day of Parolin's talks with Kirill and Lavrov, recalling the hardships facing Russia's Catholics — even in Moscow itself. Although government officials had been ordered last May by an arbitration court to return the city's Catholic Sts. Peter and Paul Church, they'd failed to do so, Kovalevsky said.

This was not a "trivial property dispute" but a "planned policy by the Moscow authorities, aimed at stripping away the rights of Catholic believers," he said in the statement. 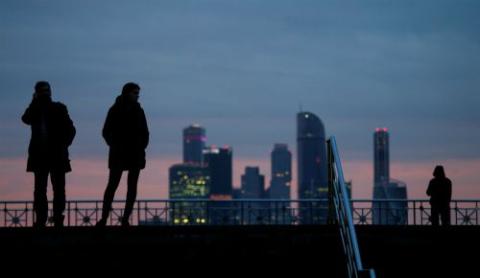 People are seen in Moscow May 17. (CNS/Maxim Shemetov, Reuters)

For this reason, he was withdrawing remarks he'd made before Parolin's arrival about "an improvement in church-state relations in Russia," Kovalevsky added. If the real situation wasn't one of "direct persecution," then it was certainly one in which rights were being "ignored and curtailed."

"Russia's Catholic community has enthusiastically greeted Cardinal Parolin's visit — it gives us hope of an improvement in the situation of Catholics living in Russia," Kovalevsky added. "I hope the authorities will prove by real actions that, while they're interested in peace between nations and confessions, they are also ready to uphold the legitimate rights of citizens."

The bishops' conference secretary-general, clearly bitter, refused comment at the end of the visit, telling NCR on Aug. 24 it has been "a purely official event, with no effect on the local church."

Greek Catholics in the Ukraine

Meanwhile, Greek Catholics in Ukraine, whose church combines the eastern rite with loyalty to Rome, are also worried about the visit's implications. When the pope met Kirill in 2016, their 30-point declaration contained negative references to Greek Catholics, fueling fears the Ukrainian church could be sidelined in the interests of wider diplomatic and ecumenical advances.

These were stirred again when Hilarion attacked Ukrainian Catholics during his talks with Parolin, accusing them of "politicized statements and aggressive actions."

Although Parolin didn't publicly reject the accusation, Przeciszewski thinks Ukrainians can take heart from his reported warnings that Russia's 2014 annexation of Crimea violated international norms and demands that the Russian government "rigorously uphold the main principles of international law." But these were just verbal statements, the Polish editor cautions. As yet, no one knows whether they'll have any impact on the course of events.

While Orthodox representatives attended Parolin's Moscow Mass, critics point out that his stay failed to include any ecumenical service — or any apparent discussion of a papal visit, which clearly evoked little interest on the Russian side. Parolin declared himself "honored and thrilled" with his one-hour meeting with Putin, but critics note the cardinal had to travel to Sochi on the Black Sea for the privilege, a location pointedly close to eastern Ukraine and Crimea.

If this is to reflect well on the Vatican, it will have to be followed by meaningful steps to help Russia's Catholics, as well as the prospects for international co-operation. The results should at least be clear by next January, when Russia's Catholic bishops, headed by their Italian-born archbishop, Paolo Pezzi, visit Rome for "ad limina" talks with the pope.

"It's quite characteristic, and quite worrying, that few if any positive voices have been raised about this visit within Russia's Catholic community — they simply have no idea what they may gain from it," Przeciszewski told NCR. "If we look at it as a contribution to dialogue and peace, then we can certainly see it as a success. But for now at least, everything remains at the level of hope and conjecture. Expectations have been encouraged and dispelled many times before."

A version of this story appeared in the Sept 22-Oct 5, 2017 print issue under the headline: Russian Catholics skeptical of Cardinal Parolin visit.