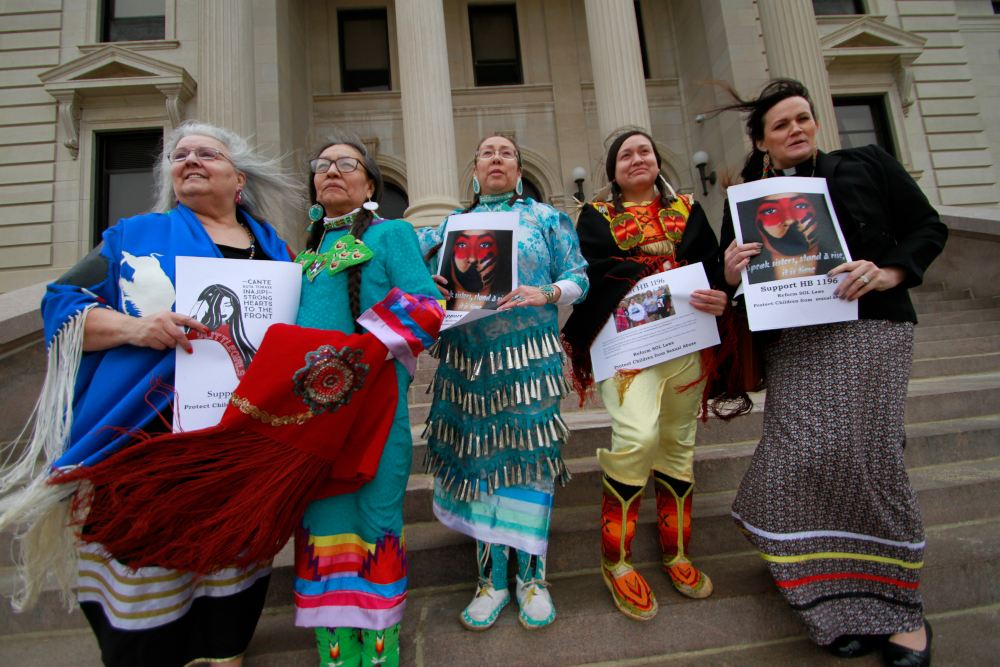 From Left, Geraldine Dubourt, Francis Hart, Marie Ogitchida, Mikayla Maxwell and Michelle Dauphinais Echols stand on the steps of the South Dakota Capitol in Pierre, S.D. on Monday, Feb. 24, 2020. Lawmakers killed a bill that would have given survivors of childhood sexual abuse a two-year window to sue organizations in which abuse occurred. (AP/Stephen Groves)

Louise Aamot Charbonneau couldn't make her annual trip to the South Dakota Legislature this year to confront lawmakers with her story of surviving childhood rape and abuse at the hands of priests and nuns at a boarding school for Native Americans during the 1950s and 1960s.

The 69-year-old died suddenly three weeks ago. But her sisters, bonded both through family and survival, showed up, along with their daughters and granddaughters.

They continued their push for lawmakers to open a two-year window for victims of childhood sexual abuse to file lawsuits against organizations in which the abuse occurred. The proposal has died every year, but they keep coming back to confront lawmakers with their testimony that priests and nuns at St. Paul's Indian Mission School systematically perpetrated rape, abuse and even forced abortions.

For nearly a decade, Charbonneau, along with her eight older sisters, has made their case to lawmakers. Geraldine Dubourt, one of the sisters, said in some ways she was glad her sister Louise died peacefully at her home so she didn't have to continue the fight.

She said she doesn't make the annual trip to Pierre for herself anymore, but to protect the next generation of Native American women. She is now also looking to them to carry their cause. The living sisters have all entered their 70s.

The Legislature in 2010 passed a law that does not allow childhood sexual abuse survivors over age 40 to sue organizations. Marci Hamilton, a Professor at the University of Pennsylvania who runs an organization advocating for removing the statute of limitations on childhood sexual abuse, told lawmakers that South Dakota is the only state since 2002 to put restrictions on the statute of limitations.

The bill to undo that was once again defeated by lawmakers who did not want to open churches and organizations up to lawsuits for past abuse.

Justin Bell, a lobbyist for St. Joseph's Indian School in Chamberlain, cast doubt on the memories of childhood sexual abuse survivors, arguing that the passage of time make it more difficult to disprove allegations. He pointed to the recent filings by the Boy Scouts of America as an example of the ruin that these types of lawsuits can bring to an organization.

She argued that lawmakers inaction doesn't just affect their case, but could allow future abuse within organizations and churches.

The Catholic Diocese of Sioux Falls did not immediately return a call for comment on the case.

The current law stipulates that childhood sexual abuse survivors must sue organizations within three years of the abuse or when they discovered effects of abuse. But the average age that victims come forward is 52, according to Hamilton.

It was around that age when the Charbonneau sisters and some of their fellow students began opening up about their experiences at St. Paul's, which was turned over to the Yankton Sioux Tribe and became Marty Indian school in the 1970s.

"I didn't tell my children about what happened to me until the past five years," said Francis Hart, who also attended the school with the sisters.

Hart said it was important to tell her children about the sexual, physical and mental abuse she endured so that they could fight for other Native women.

Her daughter and granddaughter drove through the night from Minnesota to attend Feb. 24 committee hearing, arriving at 4 a.m. Her daughter donned a dress with hundreds of tiny bells that made gentle clinks as she moved through halls of the Capitol. The bells send prayers of healing, she said.

As the bill died, Hart's granddaughter, 25-year-old Mikayla Maxwell, turned to her mother and grandmother and told them, "I've got you guys. I'll keep this going for the rest of my life."