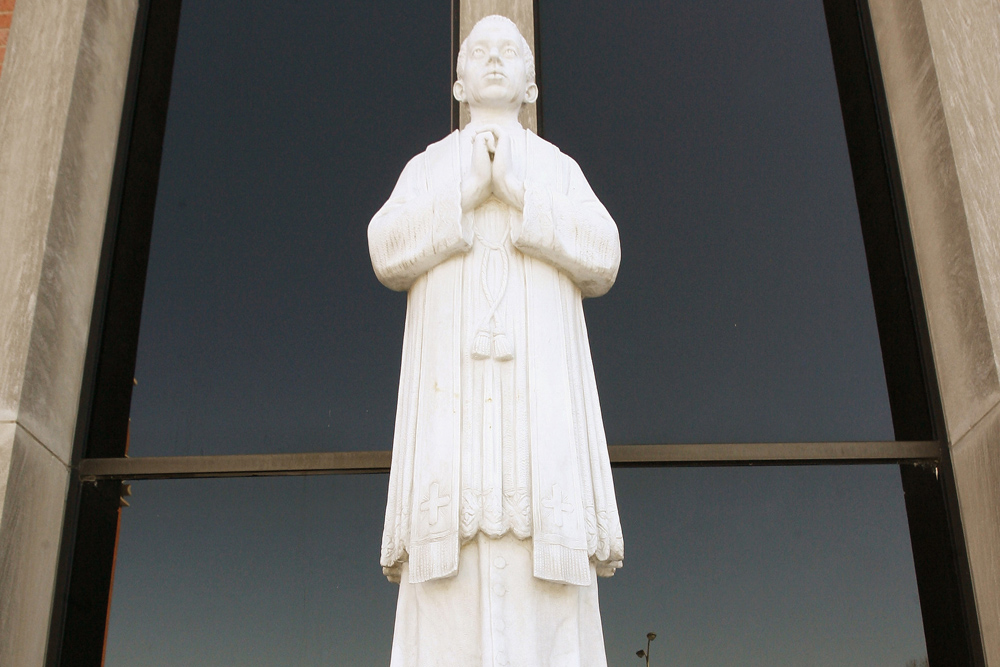 A statue and plaque dedicated to Fr. Augustus Tolton sits in front of St. Peter's Catholic School, where he attended school as a boy, in Quincy, Illinois. (CNS/Karen Callaway, Catholic New World)

Pope Francis declared on June 11 that Fr. Augustus Tolton, the first African-American Catholic priest, lived a life of heroic virtue, a move that put a man who'd been born a slave one miracle away from being declared Blessed, the step before official sainthood. As Tolton (1854-1897) joins the dozen or so U.S. sainthood causes at this stage, his wasn't the only U.S.-based cause to advance last month, nor the only one dealing with racial issues in the United States.

The Diocese of Brooklyn completed the diocesan phase of the cause of Msgr. Bernard Quinn (1888-1940), a white priest who ministered to African-Americans, drawing the opposition of the Ku Klux Klan in the process. Still in the diocesan phase — in Jackson, Mississippi — is Sr. Thea Bowman (1937-1990), the first black member of the Franciscan Sisters of Perpetual Adoration, whose cause went before the U.S. bishops for consultation last November. The move brought Sister Thea's story full circle, as she famously addressed the U.S. bishops in 1989.

"Her demeanor, her positive love for our Church linked to her African-American heritage was inspiring," recalled Archbishop Wilton Gregory of Washington who, as an auxiliary bishop of Chicago from 1983-1993, met Sister Thea on numerous occasions.

Redemptorist Fr. Maurice Nutt, who is vice postulator of Bowman's cause and author of the book Thea Bowman: Faithful and Free, said the overwhelming reception by the bishops, nearly 30 years later, means the issues she embodied "are still essential and evident today." Nutt added that this confluence of sainthood causes related to African-American Catholics — who often feel like second-class citizens in their own church — means that God is calling everyone's attention to the role and witness of black Catholics. 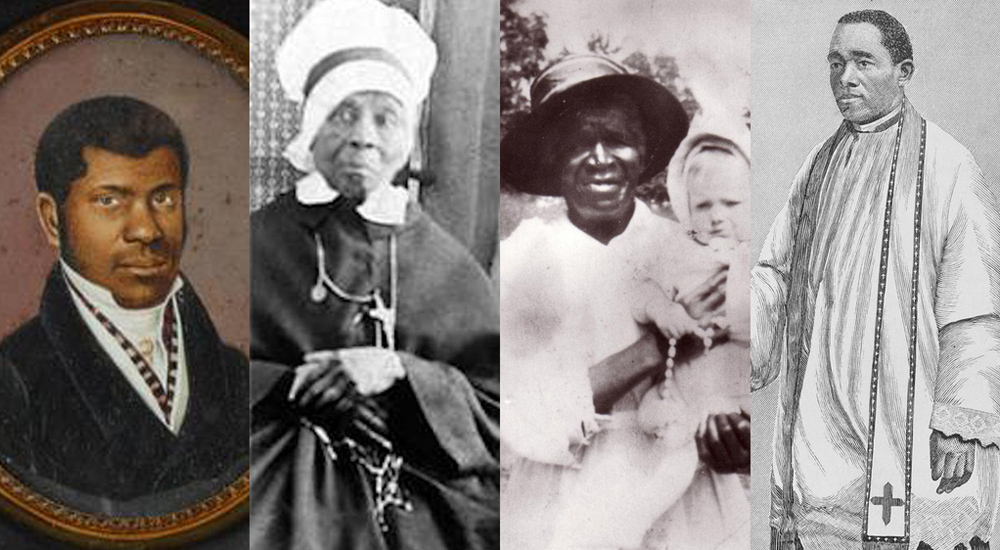 Pierre Toussaint, from left, Mary Elizabeth Lange, Julia Greeley and Augustus Tolton are some of the African-American candidates being supported for sainthood. (RNS/Photos via Creative Commons; Greeley, Courtesy Archdiocese of Denver)

"It's endorsing the African-American saga," said Bishop Joseph Perry, auxiliary bishop of Chicago and postulator of the Tolton cause. Perry emphasized that sainthood causes in general are "not so much proclaimed by the hierarchy as they are pressed forward by the faith of the people who honor them, who carry on their memory."

This journey in memory has led to very real encounters with holiness for the postulators who guide these causes, even at a distance of decades. Fr. Paul Jervis, pastor of St. Francis of Assisi-St. Blaise Parish in Brooklyn and postulator of Msgr. Quinn's cause, first encountered Quinn's story in 1983, while assigned as a young priest to the parish Quinn founded, St. Peter Claver. Parishioners who remembered Quinn were still alive then, and they spoke with fervor about the priest who loved the black community, founding a parish for them in 1921 and an orphanage in 1928, which the KKK burned down twice even before it was opened.

"This priest seemed to be bigger than life," Jervis recalled.

Perry, who was ordained a bishop about a century after Tolton's death, cited the extensive research of a canonization cause as helping to make Tolton so real to him and someone he speaks to in prayer almost daily.

"I think I've come to know him as if he was just a fellow priest, a fellow brother," Perry said. 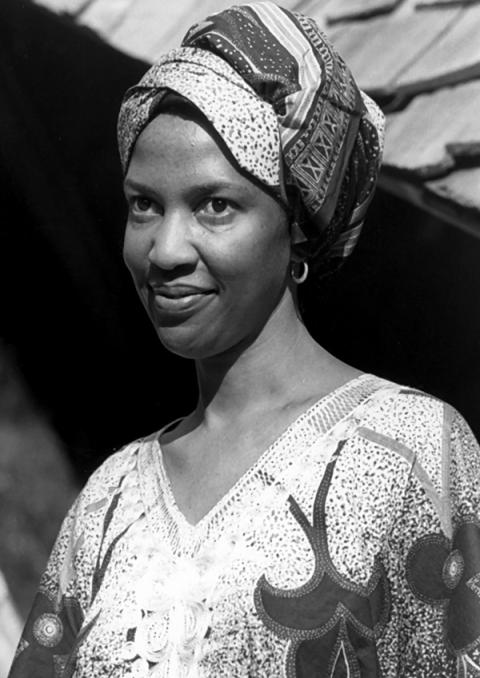 Nutt knew Thea Bowman for the last six years of her life, meeting her as a seminarian. She was too ill to attend his ordination in 1989, but he went to her afterward, knelt down and asked her to lay hands on him.

Gregory concurred: "She was one of those individuals who enriched you simply by being in her holy and enthusiastic presence."

That Thea Bowman was a "prophetic witness to the eradication of racism," as well as a witness to the role of women in the church, Nutt said is reflective of how many saints challenge the church to reform or, at the very least, act with integrity. He encapsulates the message of Thea Bowman's life to the church as: "I'm not asking you to be any more than who you say you are."

Perry said that Tolton and Quinn's stories both "surface some of the more embarrassing pages of our Catholic life" in terms of Catholics displaying racist behavior. He notes that Tolton's "pastoral openness to any and everybody, indiscriminately, when society and the church was not ready for … white and black worshiping under the same roof" was so disturbing to people "that a couple of people organized against him to be sure that it was obliterated."

Jervis in Brooklyn cited the lack of any support from the official church for Quinn's ministry at the time as a sign of his prophetic witness. This extended to his encouraging his parishioners to learn about their own history and culture. "He told them they had a history to be proud of," Jervis said, noting that Quinn also worked to foster vocations among black youth, realizing he could only do so much as a white, Irish-American priest, and that "people should also have the pride of having their own."

Another way these sainthood candidates challenge the church comes with the canonization process itself, said Katie Grimes, assistant professor of Christian ethics at Villanova University and author of Fugitive Saints: Catholicism and the Politics of Slavery. She cautioned against the process becoming "a form of exoneration of the church," using the example of how a federal holiday for Martin Luther King Jr., itself a positive development, obscures how, while he was alive, King was hated by many white people. It's the tendency, she says, to see oneself as "the good guy in the story of the past," instead of being disturbed by reality.

Perry agrees that racism in the church "offers the opportunity for the church to pause and to understand where we have been deficient." Reflecting on a story like Tolton's, he said, "We have to pose the question, 'Are we learning from these folks?' "

'The church needs a saint or saints who can speak to the issues of the day. We're still really dealing with an upsurge of racism, very nasty racism.'
—Fr. Paul Jervis

At the same bishops' conference meeting as the Thea Bowman consultation, the bishops also adopted a new pastoral letter on racism, "Open Wide Our Hearts." The letter, Perry said, rose from the desire to address the "critical moment" of the last few years, with church vandalism, neo-Nazi demonstrations and other disturbing signs. Nutt saw the timing of the pastoral letter with Sister Thea's cause as a "clarion call for racial justice in the Catholic Church and in society at this time."

"The church needs a saint or saints who can speak to the issues of the day," Jervis concurred. "We're still really dealing with an upsurge of racism, very nasty racism."

Jervis added that "Father Quinn was totally opposed to racism in all matters" and that his advocacy extended into structural reform, appealing to local government to help get people access to housing and jobs. He noted that, when Quinn died, The New York Times hailed him as a "champion of Negro rights."

Drawing a straight line from Quinn's ministry and racist rhetoric currently in the news, in 1927 the Times listed a Fred Trump — father of Donald — among those arrested following a clash between the KKK and police in Queens.

On racism today, Perry asked, "Why does this continue to plague a prosperous, technological and educated society like ours? It's contradictory." But like the saints, he said, living the Gospel heroically can lead to positive change, "if we can keep ourselves from being so fearful about one another, fearful about shortages and preserving our own space and naming each other the enemy."

A version of this story appeared in the Aug 9-22, 2019 print issue under the headline: Sainthood steps challenge the church.