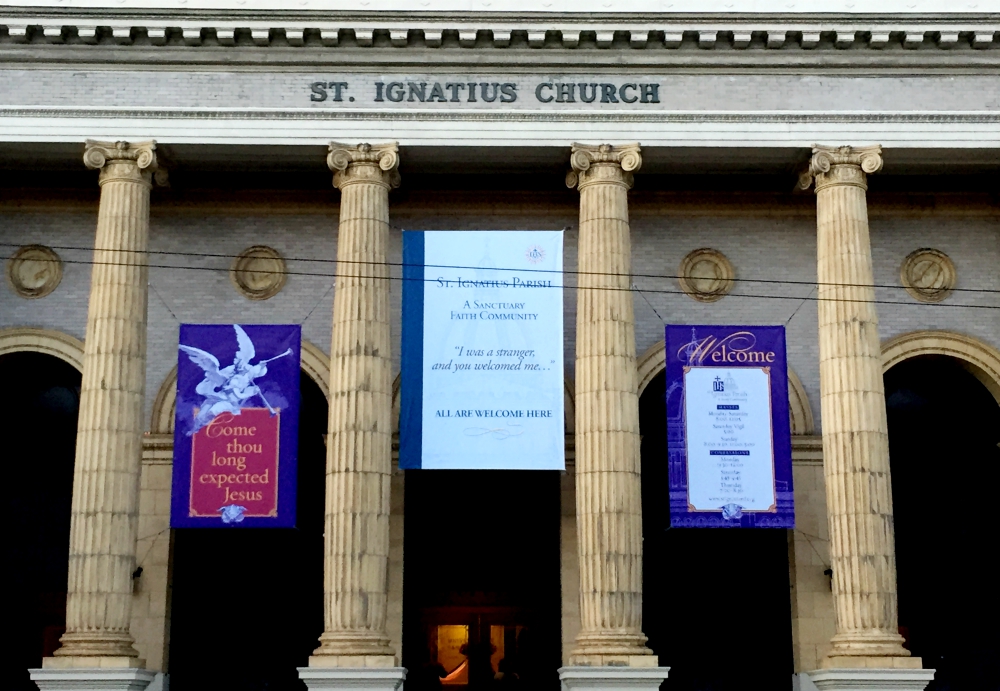 A large banner on San Francisco's St. Ignatius Church declares the parish's status as a sanctuary for migrants, refugees and others "subject to exclusion or removal from this land." (Courtesy of St. Ignatius Parish)

San Francisco's two Jesuit parishes have amplified their ongoing outreach to immigrants, refugees "and other peaceful people who may be subject to exclusion or removal from this land," by issuing a joint statement underscoring their status as sanctuary communities.

Dated Oct. 8 but publicly released on the feast of Christ the King, Nov. 26, the "Joint Statement on Sanctuary" from St. Agnes and St. Ignatius makes a dozen commitments, including educational programs, legal accompaniment, and advocacy for refugee assistance and immigration law reform.

The declaration emphasizes that the parishes will "not voluntarily assist or cooperate or consent to immigration enforcement activities on our grounds unless legally compelled to do so."

"They include those who are new to this country, those who are sons and daughters of migrants, and those who trace their ancestry here back generations. We speak English, Spanish, Tagalog, Japanese, Cantonese, and many other languages."

Bonfiglio and associate pastor Jesuit Fr. John Coleman both noted that St. Ignatius has been fielding extensive outreach ministries, such as multiple food programs, help for the homeless, an El Salvador sister parish, family counseling, Habitat for Humanity, and solidarity work with immigrants and refugees.

"We kind of backed into" declaring St. Ignatius a sanctuary site, Bonfiglio told NCR, "in that we were already doing" apostolic work associated with designation as a sanctuary.

Neither parish is home to a significant number of refugees or immigrants under duress like other Bay Area congregations. However, Bonfiglio said, teaming with St. Agnes to publicly proclaim the parishes as sanctuaries takes on larger meaning "that has to do with the accompaniment leg of sanctuary."

"We kept hearing that it matters to people whose lives are threatened and uncertain because of the current climate that a parish like ours" supports them, the pastor explained.

About 90 percent of St. Ignatius' 1,800 households hail from outside the parish boundaries

St. Agnes is "a very diverse parish," Allender said, notably in terms of age. "We have many, many younger people — young singles and couples with little kids. Many are up and comers in the tech industry. Ethnically, we are mostly Caucasian with a spattering of African-Americans and Filipinos. And we are gay and straight, and a very open and welcoming parish."

St. Agnes initially declared itself a sanctuary site several months ago, Allender said. "We might have been the first Jesuit parish in the states to do that, although Mission Dolores in East Los Angeles has been doing work with the undocumented for years."

A lengthy "discernment process" that included several monthly meetings of roughly 30 interested parishioners led to St. Ignatius' pronouncement, according to Bonfiglio and Coleman.

Many who wanted to help refugees and immigrants were "initially kind of reticent of sanctuary," Coleman said. "It is such a loaded issue."

However, a consensus emerged as "we reflected and prayed on our call as Christians and a parish to concretely live the Gospel," said Bonfiglio.

A pivotal event, he noted, was what was termed "Migrant in the Pulpit." During Masses on a late-August Sunday, a man shared his story of being an undocumented U.S. migrant for 23 years and visited with parishioners afterward.

"What breaks open people's hearts are stories and narratives like these," Bonfiglio said.

"We had been providing sanctuary without actually declaring it," said St. Ignatius parishioner Mike Neary. He chairs the parish Solidarity Network, which will be closely involved with the sanctuary efforts.

He noted that the two Jesuit parishes have been mutually caring for a mother and her five children who had escaped an abusive situation in Mexico.

In addition, he said, "several of us have accompanied individuals to court hearings."

However, he and the other parish leaders said they are concerned that the sanctuary declaration could give the impression that immediate shelter and refuge are available if someone knocks on the parish door.

Neary hypothesized, "What happens if someone shows up on a Tuesday afternoon and tells us that his brother has been picked up by ICE [U.S. Immigration and Customs Enforcement] and asks for shelter?"

While neither St. Agnes nor St. Ignatius have shelter facilities, "we are setting up to provide access" to such services as well as caseworkers based in other parishes and subsidized by Catholic Charities, Neary said.

San Francisco Archbishop Salvatore Cordileone also cautioned about creation of false hope by the dual parish sanctuary announcement, Bonfiglio said, when the pastor called to inform the archdiocese of the move.

Nonetheless, Bonfiglio and Allender said the archbishop clearly supports them. 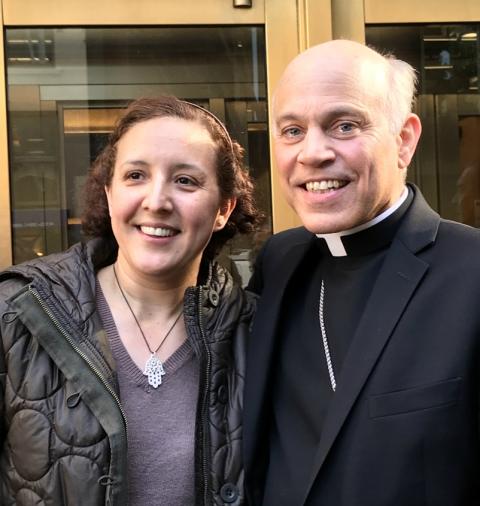 Archbishop Salvatore Cordileone stands with Yadira Mejia outside the Sansome Federal Building in San Francisco Nov. 21. Her husband, Hugo, had been detained for about six months in his fight against deportation, but he was released from detention on a $15,000 bond that same day. (CNS/Catholic San Francisco/Valerie Schmalz)

"This is an issue close to the archbishop's heart," Allender said, noting that Cordileone had joined activists at a U.S. immigration court hearing in November to contest a deportation order for Hugo Mejia, a father of three.

Allender said he and Cordileone might differ on many issues, but "we are certainly on the same page on this one."

In a Nov. 20 op-ed piece for the San Francisco Chronicle, Cordileone described the Mejia case as "a call for all of us to look beyond heated rhetoric and see the humanity of the most vulnerable members of our communities."

Bonfiglio, Coleman, Allender and Neary all said there has been surprisingly negligible parishioner pushback to the sanctuary commitment.

"We have had basically no resistance from the parish," Allender said.

"We thought there might be resistance, but there really hasn't been any," said Coleman, whose Christ the King Sunday homily focused on the sanctuary statement.

Both priests pointed out that San Francisco itself is a sanctuary city and that the Bay Area's generally progressive political climate would tend to support the parishes.

St. Agnes' and St. Ignatius' borders touch near San Francisco's "panhandle," and the churches are about a 20-minute walk from one another. St. Agnes is located in the city's iconic Haight/Ashbury neighborhood, and St. Ignatius is adjacent to the Jesuit University of San Francisco.

Asked about the university's involvement with the parishes' sanctuary work, Coleman and Allender both said the university walks a fine line and has to be cautious about overt activities that could threaten federal funding or place undocumented students in the spotlight.

On the grassroots level, said Coleman and Bonfiglio, University of San Francisco students are the backbone of many parish ministries.

Coleman called attention to a large banner on the outside of the church declaring its sanctuary commitment. "It's a clear message to the students," he said.