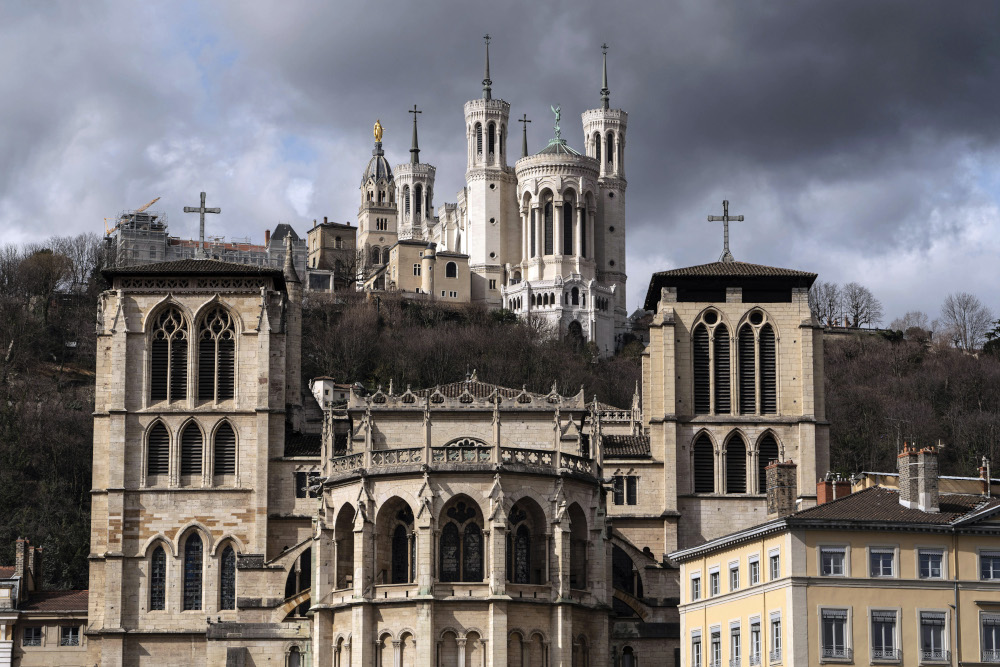 The Saint-Jean Cathedral, foreground, and the Fourviere Basilica, top, are pictured in Lyon, central France, on March 7, 2019. (AP/Laurent Cipriani)

Sometimes it's a cross of human excrement smeared on a church wall, with stolen Communion hosts stuck at the four corners. Other times, a statue of the Virgin Mary lies shattered on the floor.

Now and then, a fire breaks out in a house of prayer.

Roman Catholic churches have increasingly come under attack in France, a country so long identified with Christianity that it used to be called "the eldest daughter of the church."

A recent fire at St. Sulpice, the second-largest church in Paris, has shed light on a trend that has become commonplace in many smaller towns.

"Who has heard of the sacking of the monastery of Saint Jean des Balmes in Aveyron? Of those teenagers who urinated into the holy water font of the church at Villeneuve de Berg in Ardèche?" the Paris daily Le Figaro asked last week in an article highlighting some of the lesser-known profanations around the country this month.

Incidents such as these get a brief mention in the press, complete with quotes from Catholics shocked at the sight of scattered hosts or beheaded statues, and sometimes a short video clip on national television. 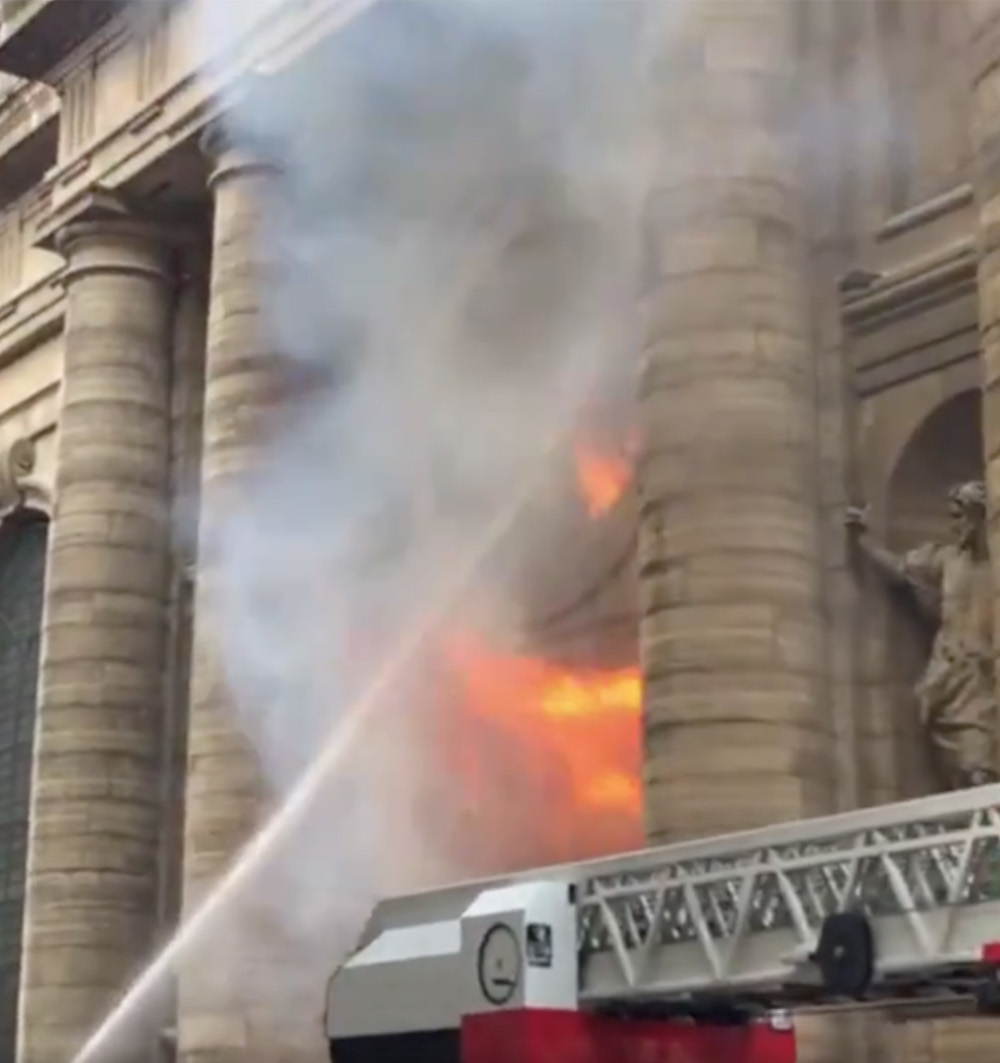 But apart from official denunciations of individual attacks, Catholic leaders in France have refrained from dramatizing what they say is a worrying trend.

The sharpest reactions have come from conservative politicians, including two National Assembly members who have called for a parliamentary inquiry into "the multiplication of anti-Christian acts."

"The images of flames in Saint Sulpice church this weekend are one more example of the violence committed against Catholics," Philippe Gosselin and Annie Genevard said, referring to the blaze in an edifice known to moviegoers around the world as the church in the film version of Dan Brown’s "The Da Vinci Code."

Among attacks on churches in February, a cross of human excrement was found in the southern city of Nimes, a statue of Mary was smashed in a Paris suburb and a statue of Jesus decapitated in an Atlantic seaside resort with the very Christian name of Saint Gilles Croix de Vie (St. Giles, Cross of Life).

The attacks on Catholic churches and the muted reactions to them reflect the complex role France's once dominant faith plays in a society that has changed so much that ignorance of religion — not only Christianity but others as well — is widespread.

"We adopt a reasonable attitude. We do not want to develop a discourse of persecution. We do not wish to complain," Archbishop Georges Pontier, head of the French bishops conference, said when asked about attacks on churches.

"We are not victims of a 'Cathophobia'," he told Le Point magazine. "In its history, Judaism has fought an ongoing struggle against anti-Semitic groups. We Catholics in France now do not have to face such violence every day!"

Attacks on other religious sites, especially Jewish and Muslim properties, have also risen but are far fewer than those on Catholic churches because of their minority status. Protestants, who make up only 2 percent of the population, have seen few attacks on their churches, possibly because they lack many symbols distinct to Catholicism.

Other factors also influence the Catholic Church's reaction. It doesn’t want to start a campaign that might encourage its critics, priests say. With the clerical sexual abuse scandal regularly in the headlines, they add, the bishops are also in a weak position to appeal for sympathy.

Moreover, there are apparently several different motives behind these attacks.

Some are pranks by youngsters tempted to deface a local church used mostly by older people in their town. With Sunday Mass attendance down to about 5 percent of all Catholics, many church buildings around the country do little more than mark the center of town.

Church buildings are being closed down or regrouped into larger parishes, which means they’re often locked or empty for most of the week and an inviting target for vandals.

"Part of the population has not been socialized as Christians and does not realize what these attacks on the sacred can mean," said sociologist Philippe Portier.

Paris police have hinted the March 17 fire in St. Sulpice, which damaged a door and window and spread soot on pews and artworks inside the church, might have been caused by homeless people setting old clothes ablaze.

"This is not an anti-religious attack," said Fr. Jean-Loup Lacroix, the pastor of St. Sulpice. 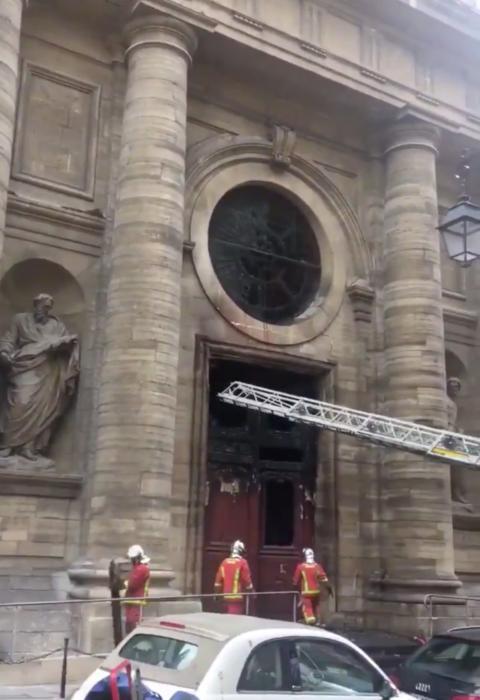 Thieves make up a second group attacking churches, which often contain gold-plated vessels, old paintings and elegant statues that, while not masterpieces, are worth attractive sums on the black market. Burglars usually break into a church and take what they want, without touching anything else.

The government has a program to help churches finance better surveillance systems, but often it’s not enough or priests think regular locks are enough to protect their buildings.

Judging by the damage they do, the third group seems to be hostile to religion, but it’s hard to classify them because they don’t claim responsibility for their attacks.

These vandals tear down crosses, scatter consecrated hosts and smash statues to shock Catholics who consider these objects to be signs of their faith itself.

According to Catholic doctrine, hosts of unleavened bread literally become the body of Jesus himself at the Mass. Consecrated but unused hosts are stored for future use, so breaking into the tabernacle holding them and scattering them on the floor ranks among the highest of sacrileges.

"When somebody tramples on a host, it’s as if the whole church is being stomped on," Catholic historian François Huguenin said.

Miviludes, a government agency created in 2002 to monitor sectarian groups judged to threaten public safety, warned over a decade ago against satanists attacking cemeteries and promoting "acts of barbarians."

Although the number of satanists in France is tiny, the ideas they represent — hostility to religion, rejection of institutions and a glorification of strength over the perceived weakness of Christians — tap into broader views out there in French society.

"There are new religious movements that consider the imposition of belief in God has emasculated us and they must destroy its symbols," Portier said.