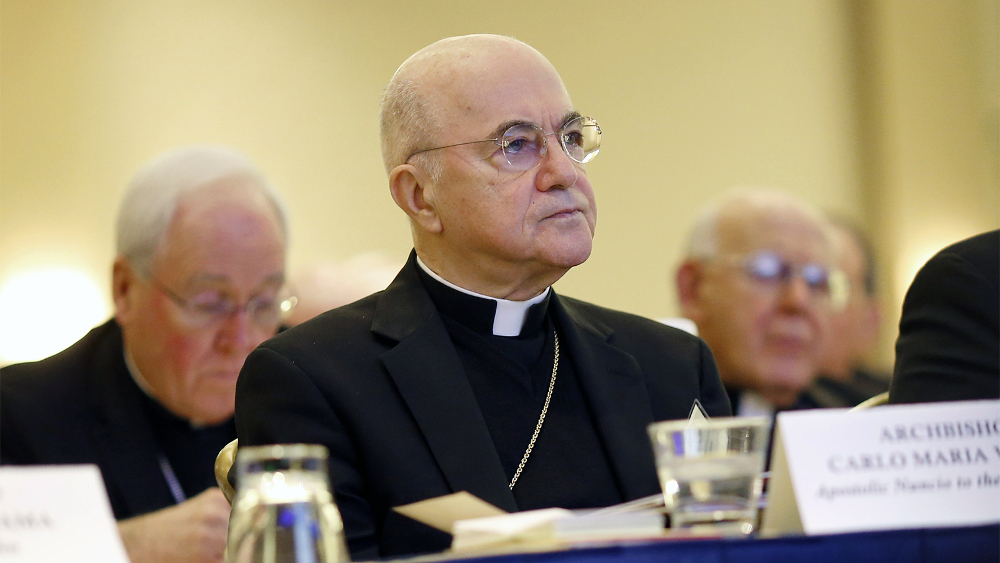 It is hard to know what to think of the bombshell dropped by Archbishop Carlo Maria Viganò, who released a scalding letter on Sunday (Aug. 26) calling on Pope Francis to resign. Viganò, the former Vatican ambassador to the United States, claims in the letter that Pope Francis knew that recently resigned Cardinal Theodore McCarrick abused seminarians when he was a bishop in New Jersey but nonetheless didn't punish the cardinal.

The 7,000-word document also accuses about a dozen Vatican cardinals who served in the papacies of John Paul, Benedict and Francis of being part of the coverup.

It might be easy to write Viganò off as a disgruntled employee. He was denied the job he sought under Pope Benedict XVI — president of the governorate of the Vatican City State — and was sent to the United States as papal nuncio, or representative to the U.S. government and the American church. In a 2012 memo to Pope Benedict, which was leaked to the media, Viganò complained that he was being exiled because he had made enemies trying to reform Vatican finances.

Nuncio to the United States is no minor job, but the head of the Vatican government normally becomes a cardinal.

Viganò became even more unhappy with his job as nuncio after the election of Pope Francis, who ignored his recommendations in the appointment of bishops. And although most nuncios to the U.S. later become cardinals, it became clear that he was never going to get a red hat.

It is worth noting that many of the people Viganò accuses are the same people with whom he had conflicts in the Vatican.

Nor is this the first time Viganò has criticized the pope. He joined Cardinal Raymond Burke and others in criticizing the pope's document on the family, "Amoris Laetitia," because they thought it diverged from orthodoxy.

What is more damning are questions about Viganò's own record regarding the American sex abuse scandal. During legal proceedings against the Archdiocese of St. Paul and Minneapolis, a 2014 letter from Viganò was uncovered in which he told an auxiliary bishop to limit an investigation against the local archbishop and to destroy evidence.

Viganò was certainly not known for transparency and accountability while he was nuncio from 2011 to 2016, but now he presents himself as a born-again defender of the abused.

In the letter, Viganò goes after many former and current officials in the Vatican, including the three most recent secretaries of state: cardinals Angelo Sodano, Tarcisio Bertone and Pietro Parolin. Other Vatican cardinals he alleges knew about McCarrick's abuse include William Levada, Giovanni Battista Re, Marc Ouellet, Leonardo Sandri, Fernando Filoni, Angelo Becciu, Giovanni Lajolo and Dominique Mamberti.

Given how the crimes of Fr. Marcial Maciel Degollado, founder of the Legionairies of Christ, were ignored during the papacy of Pope John Paul II, some of what Viganò says sounds possible. But no evidence is presented.

Interestingly, John Paul escapes Viganò's criticism. Viganò implies that McCarrick’s appointment to Washington and as a cardinal was the work of Sodano "when John Paul II was already very ill." Yet McCarrick was appointed archbishop of Washington in 2000, five years before John Paul died. Was John Paul a puppet during his last five years in office? And if McCarrick’s abuse of seminarians was so widely known in John Paul’s curia, it is hard to believe that Cardinal Joseph Ratzinger did not know. Did he tell John Paul?

Viganò claims that Re told him that, sometime between 2009 and 2010, Pope Benedict told McCarrick to stop living at a seminary, saying Mass in public, traveling and lecturing.

But there is no evidence to support the claim that McCarrick was sanctioned by Pope Benedict. McCarrick continued to celebrate Mass, travel and lecture throughout the papacy of Benedict. And on his many visits to Rome, he stayed at the North American College, the residence for U.S. seminarians. Anyone who thinks Benedict would tolerate such disobedience doesn’t know Benedict.

Viganò claims that he told Pope Francis on June 23, 2013: "Holy Father, I don’t know if you know Cardinal McCarrick, but if you ask the Congregation for Bishops there is a dossier this thick about him. He corrupted generations of seminarians and priests, and Pope Benedict ordered him to withdraw to a life of prayer and penance." Since Pope Francis allegedly did not listen to him then, Viganò thinks he should resign.

Viganò released his letter as Pope Francis was wrapping up his visit to Ireland. Journalists asked the pope about it during the press conference on the plane headed back to Rome.

"I will not say one word on this," the pope said, according to a New York Times video. "I think this statement speaks for itself, and you have sufficient journalistic capacity to reach your own conclusions."

"When time will pass and you'll draw the conclusions, maybe I will speak," said Francis. "But I'd like that you do this job in a professional way." 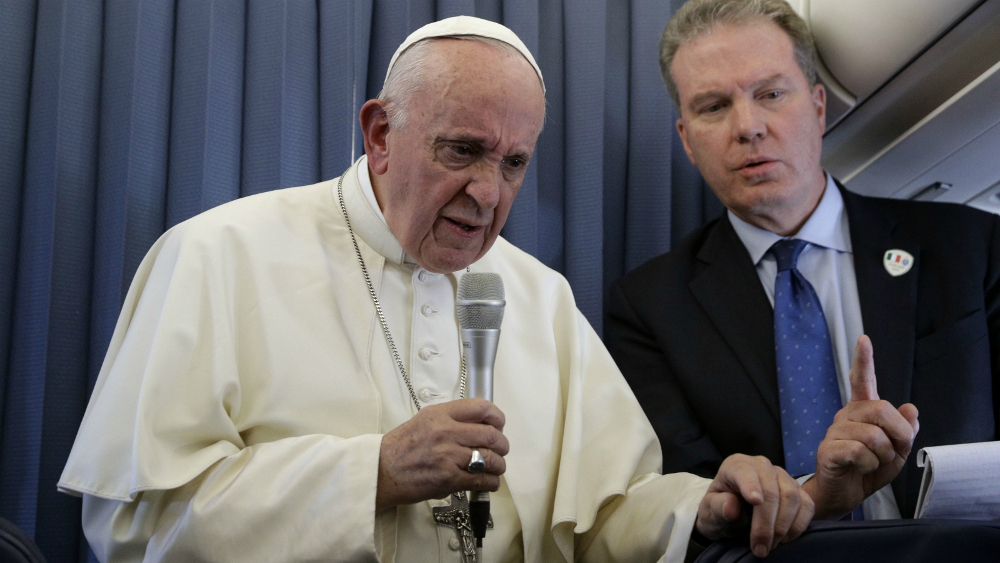 Pope Francis, flanked by Vatican spokesperson Greg Burke, listens to a journalist’s question Aug. 26, 2018, during a news conference aboard the flight to Rome at the end of his two-day visit to Ireland. (AP/Gregorio Borgia, Pool)

Of course, many headlines read: "Pope refuses to respond to accusations of coverup."

The pope was correct to encourage journalists to examine the Viganò document to see what is true and what is not. The press conference was not the place to do a line-by-line critique of the document. Many reporters have in fact examined the document and found its claims wanting.

But what about Viganò's claim that he told the pope about McCarrick?

Since the pope is the only other witness to this encounter, only he can verify or deny what Viganò said, and refusing to answer that question does not enhance his credibility. The pope's media advisers should have told him so immediately after the press conference and responded to the reporters with a clarification before they filed their stories.

The answer could have been, "No, he did not say that to the pope." Or, it could have been: "Yes, he did say that to the pope, but there is no record of the alleged sanctions by Benedict. The pope disregarded the accusations because Viganò had a history of unsubstantiated accusations. And remember, it was Francis who told McCarrick to spend the rest of his life in prayer and penance and took away his red hat."

Reporters, like most people, like the pope, but they also have a job to do. The Vatican should not make it difficult.

Just as every diocese in the United States needs to do a full and transparent account of clerical sex abuse and each diocese’s response, so too the Vatican must disclose what it knew, when it knew and what it did or did not do. Nothing less will begin the restoration of credibility to the Catholic Church.