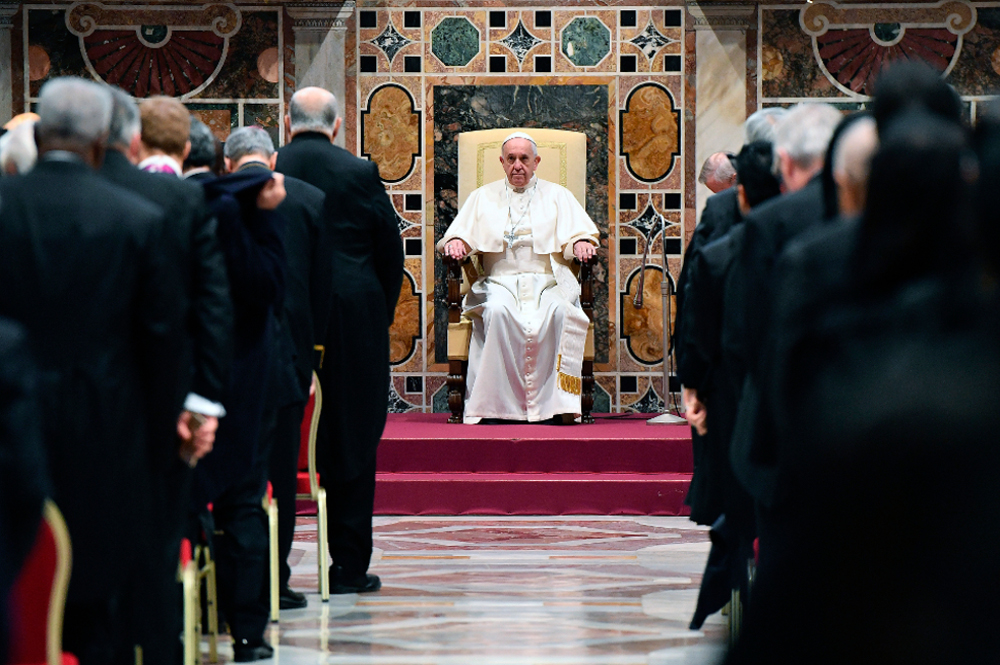 Pope Francis attends an audience with the members of the diplomatic corps accredited to the Holy See for the traditional exchange of New Year greetings at the Sala Regia, at the Vatican, on Jan. 7. (AP/Ettore Ferrari/Pool Photo)

Next month's meeting in Rome, called by Pope Francis to deal with the sex abuse crisis in the Catholic Church, may well be a failure before it even starts.

The stakes for the meeting have been ratcheted up, at least for the American church, as the Pennsylvania grand jury report on clergy sex abuse has summoned up new scrutiny of the church's response, from the pews and from government officials; then, in November, the Vatican squelched a vote at the U.S. bishops' fall meeting on measures designed to hold the hierarchy accountable for not dealing with abuse.

Now, more than 100 presidents of episcopal conferences from all over the world, plus a dozen or so other participants, are headed to Rome for a four-day conference beginning Feb. 21. According to the Vatican, the meeting will focus on three main themes: responsibility, accountability and transparency.

There are five reasons this meeting will fail.

First, four days is much too short a time to deal with such an important and complicated issue. The Vatican says the meeting will include "plenary sessions, working groups, moments of common prayer and listening to testimonies, a penitential liturgy and a final Eucharistic celebration."

If each participant speaks only once for five minutes during the plenary sessions, that would consume over 12 hours — almost half the time for the meeting. Add to that speeches from the pope, victims and experts, as well as time for small group discussions and prayer, and the time is gone.

Most major meetings of bishops in Rome, such as last October's synod of bishops on young people, last a month. Even at that, synods have always felt rushed, with little time at the end to prepare and approve a report. To think that the February meeting can accomplish anything in such a short time is not supported by experience.

Second, the expectations for this meeting are so high that it will be impossible to measure up.

Any meeting called by the pope raises expectations, but this one addresses a high-profile issue that has dogged the church for decades. It's the first meeting of its kind at the Vatican, and the media have been anticipating it in numerous stories.

In addition, having sidelined the efforts of U.S. bishops in November, the meeting must come up with a way to hold bishops accountable, or it will make the excuse look unwarranted and phony. 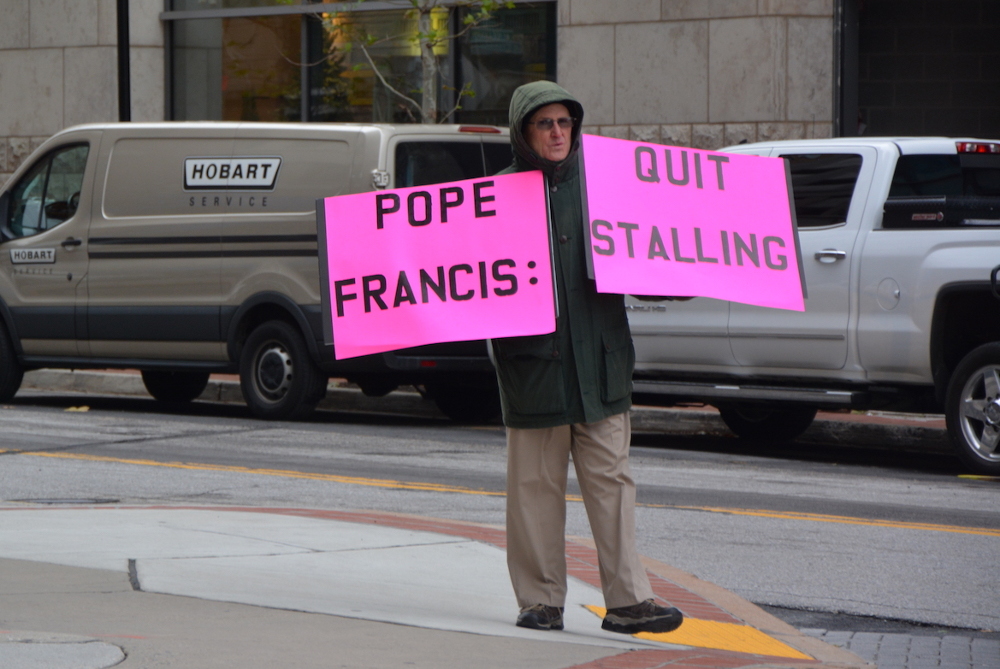 A lone protester stands outside the U.S. Conference of Catholic Bishops meeting in Baltimore on Nov. 13, 2018. (RNS photo/Jack Jenkins)

Third, a strength of this meeting is that it will include presidents of episcopal conferences from all over the world. These are some of the most important bishops from their countries. But the cultures and legal systems of the participants vary tremendously, which will make agreement on policies and procedures difficult.

Many bishops in the Global South do not believe that sex abuse of minors is a problem in their countries. They see it as a First World problem.

This is in part because many Global South bishops have no idea how bad the problem is. In their traditional cultures, victims of abuse are very reluctant to come forward to report the abuse to the church or civil authorities.

As a result, too many bishops around the world are making the same mistakes that the U.S. bishops made before 2002, when coverage of abuse in Boston encouraged thousands of victims to come forward. The bishops deny the problem; they treat it as a sin, not a crime; they don't listen to the victims; they believe the priest when he says he will never do it again; they keep him in ministry; they cover up.

It is most important that these bishops be convinced that the problem is real, and they should avoid repeating the mistakes of the American bishops.

Fourth, as far as can be seen at present, the meeting is not well-prepared.

When the pope calls a synod of bishops, there is a long and complicated process of preparation that can last a couple of years. Bishops' conferences are consulted; discussion questions are distributed; and the input from these consultations is summarized in a preparatory document that is circulated among the participants. There is also an office in Rome that is responsible for organizing the synod.

This meeting, on the other hand, was only announced by the pope in September, and the committee created to organize it was not appointed until the end of November. The committee's first communication with the meeting's participants was in the middle of December, which gave the bishops until Jan. 15 to send in their response to a questionnaire enclosed with the letter.

On the positive side, the letter urged participants to meet with abuse survivors before coming to Rome. The committee realizes how important it is to hear directly from victims, both for their healing and for a better understanding of abuse by those who listen.

The preparatory committee does have a stellar cast: Cardinal Blase J. Cupich of Chicago, Cardinal Oswald Gracias of Mumbai, Archbishop Charles Scicluna of Malta, and Jesuit priest Hans Zollner, president of the Center for the Protection of Minors at the Gregorian University. Scicluna and Zollner are recognized experts on the abuse crisis who have credibility with both the media and survivors.

Nonetheless, the meeting will also fail because, in order to succeed, Francis will have to lay down the law and simply tell the bishops what to do, rather than consulting with them. He'll have to present a solution to the crisis and tell them to go home and implement it.

Francis will not do that. He does not see himself as the CEO of the Catholic Church. He has a great respect for collegiality, the belief that the pope should not act like an absolute monarch. At his first synod of bishops, he encouraged the bishops to speak boldly and not be afraid to disagree with him. 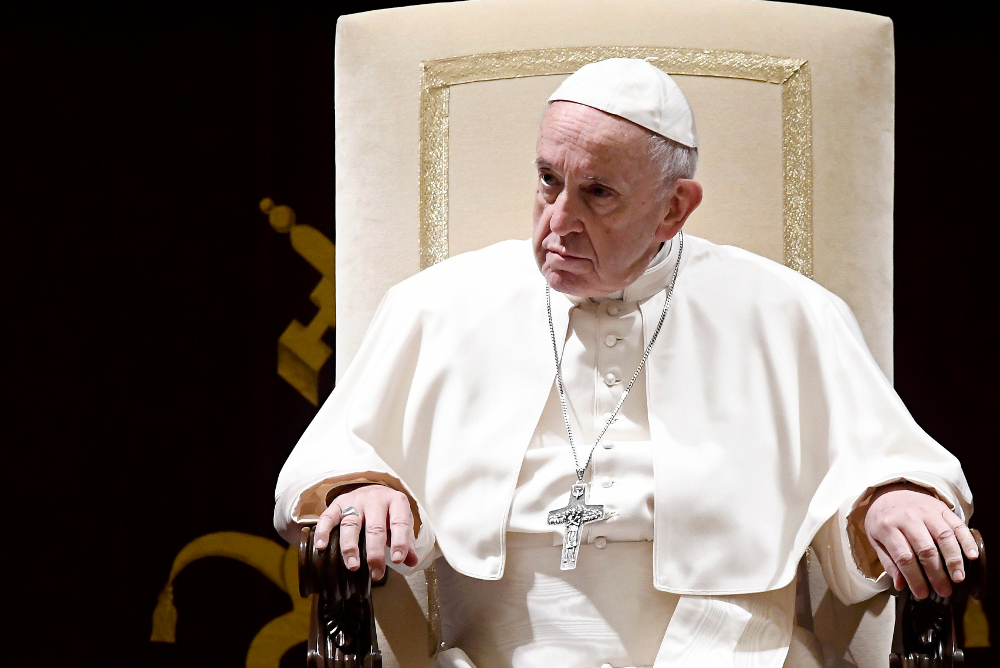 Pope Francis attends the traditional greetings to the Roman Curia at the Vatican on Dec. 21, 2018. (AP/Filippo Monteforte/Pool Photo)

I support the pope's commitment to collegiality, but discussion and consensus-building take a lot of time. People, especially survivors and the media, are rightly impatient. They are not looking for another discussion and pious talk, but concrete policies and procedures that will protect children and hold bishops accountable.

In addition, Pope Francis thinks more like a pastor than a lawyer. He calls people to conversion rather than creating new policies and structures.

According to Alessandro Gisotti, the interim director of the Vatican press office, "It is fundamental for the Holy Father that when the Bishops who will come to Rome have returned to their countries and their dioceses that they understand the laws to be applied and that they take the necessary steps to prevent abuse, to care for the victims, and to make sure that no case is covered up or buried."

Francis appears to believe that the current laws are sufficient but need to be enforced. His goal, then, will be to get the bishops on board, not come up with new solutions. This is important, but it will not satisfy those wanting accountability structures to punish bishops who do not do their jobs.

I hope I am wrong in being such a pessimist — as a social scientist, I am always a pessimist when looking at the church and the world. As a Christian, I have to be hopeful. After all, my faith is based on someone who rose from the dead. Francis may pull it off, but I fear that when the meeting is over, it will only be seen as a small step forward in an effort that is going to take years.