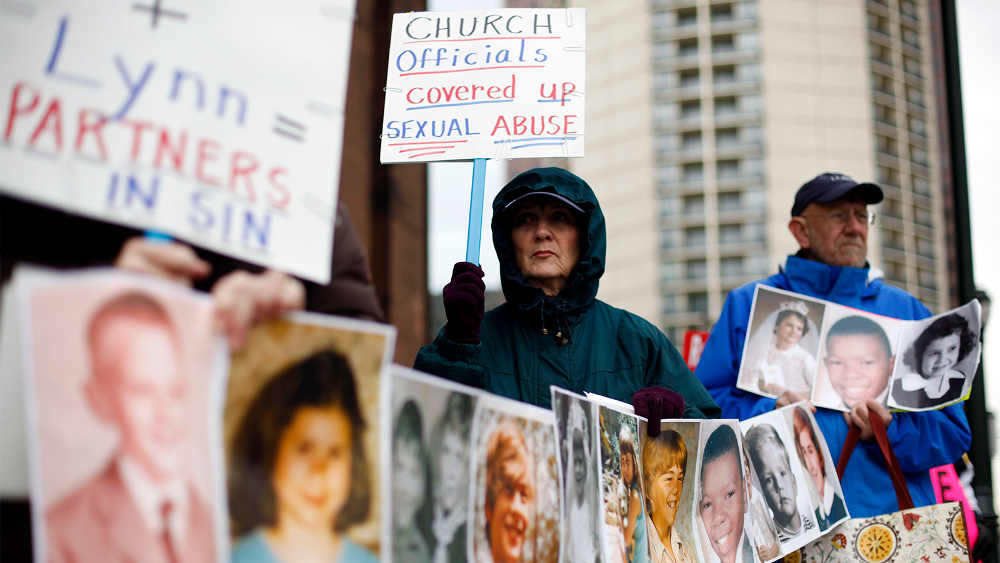 Catherine Coleman Murphy, center, and Jack Wintermyer, right, protest along with others outside Cathedral Basilica of Sts. Peter and Paul before an Ash Wednesday Mass in Philadelphia on March 9, 2011. (AP Photo/Matt Rourke)

People are not satisfied that the Catholic Church has vigorously responded to the sex abuse crisis. After seeing the crisis covered in The Boston Globe and elsewhere since at least 2002, they are surprised to see reports once again in the media.

What does the church need to do to get its house in order and satisfy its critics?

First, the church must deal with abusive priests and protect children.

Since 2002, the church has had in place policies and procedures to protect children and deal with bad priests. These policies and procedures can always be improved, but they are not bad. It should be noted that of the 300 priests described as abusers in the recently released Pennsylvania grand jury report, only two are accused of abusing within the last 10 years. All the other cases are decades old. About half of the 300 priests are dead. None are in ministry.

Today, every priest and seminarian (and every church employee or volunteer who works with children) must go through a police background check. And if anyone is accused of abuse, that person must be reported to the police. Here in California where I am writing this column, if I know of an abuse and do not report it to the police, I commit a felony and will go to jail. Even where this is not state law, the U.S. bishops now require reporting all allegations to the police.

Since 2002, church rules also require that any priest with a credible accusation of abuse must be suspended from ministry while a complete investigation takes place. The findings of the investigation must go to a diocesan review board, which includes lay membership. If he is found guilty of abuse, he can never act as a priest again. This is important because most abusive priests are protected from prosecution by the statute of limitations. The church must act if the police cannot.

Policies and procedures for dealing with bad priests are in place, but we must be sure that the bishops enforce them here in the United States and around the world.

The second thing the church must do is hold accountable bishops who do not enforce these procedures, who do not protect children. This is the sole responsibility of the pope.

Earlier this year, I would have said that Pope Francis did not understand this. During his trip to Chile in January, the pope defended the bishops against accusations of cover-up from survivors of abuse. He later admitted he was wrong and apologized. He acknowledged the cover-up and demanded that all the Chilean bishops submit their resignations. This sent a message to every bishop in the world that he had better deal properly with abuse or he is going to hear from the pope.

But the pope’s response so far has been ad hoc. He needs to establish policies and procedures and a special office in the Vatican to investigate complaints against bishops, as was recommended by the pope’s own Commission for the Protection of Minors in 2015. This office has to be headed by someone with credibility and expertise. Lay people, not just other bishops, need to be involved in this review.

If a bishop is guilty of not protecting children from abuse, he should lose his job.

What about the American bishops? Should they resign?

The problem with punishing the current crop of bishops is that most of them were not involved in the cover-up. Practically all the bishops who failed in their job of protecting minors are dead or retired. They should have been dealt with decades ago.

Third, the bishops need to fulfill their pastoral duty by reaching out and doing all they can to help survivors of abuse.

Every bishop should announce that he is willing to meet with any victim of abuse who wants such a meeting. Bishops made a huge mistake following the advice of their lawyers and insurance companies who told them not to meet with victims and their families.

Many survivors say that the hurt from not being listened to, not being believed, and being stonewalled was just as bad as the abuse itself. Allowing the survivors to tell their stories is essential to their healing. It will also allow them to tell the church what else it can do to help in their healing.

Each diocese also needs to set up a compensation fund to help survivors who cannot sue because the abuse is outside the statute of limitations. This should be a nonadversarial process run by people independent of the diocese so victims get all the money rather than having lawyers get 40 percent of the award.

The fourth thing the bishops must do is be completely open and transparent about the abuse that took place in their dioceses.

The Pennsylvania grand jury report is a wake-up call to every diocese in the country. Each must make a full disclosure of past abuse before anyone is going to believe they have this problem under control. The dioceses need to disclose the names of every priest with credible accusations of abuse. Together with his name should be a description of the accusation, when and where the alleged abuse took place, when the diocese learned about it, what the bishop did and where the priest is now if he has not been kicked out of the priesthood.

This report, of course, would have to be done by a credible person, not a cleric or church employee. Perhaps it should be a retired police or FBI investigator, a former prosecutor or a retired judge.

Unless the dioceses commit to such complete and transparent reporting of all past abuse, we will continue to see more and more reports like that of the Pennsylvania grand jury. They will dribble out for years and years to come, giving the impression that the church has done nothing to improve things.

But this reporting cannot end in the United States. The Vatican needs to report its part in this human tragedy. Who knew what, and when? What did they do?

The Vatican has no interest in such disclosures. Only Francis can make it happen. Pope Francis and the Vatican talk about the importance of confession. The church should practice what it preaches by confessing its sins in greater specificity, doing penance and committing to never letting this happen again.

What would be appropriate penance? In his recent letter, the pope recommends prayer and fasting. These are traditional penances, but I think we need to be more creative.

We should begin by asking the survivors what they think would be an appropriate penance. Certainly, a lot of fat clerics could benefit from fasting. Perhaps we should bring back “sackcloth and ashes,” which was another traditional penance for serious sins. Or a bishop could spend Lent on the street as a homeless person. Or he could spend Lent working in a shelter for abused women.

The bishops need to do something serious, dramatic and appropriate to the crime. It does not have to be for the bishop’s sins; it could be for the sins of his predecessors.

Each part of the church needs to fulfill its responsibility in responding to abuse: Bishops need to protect children and deal with abusive priests, the pope needs to hold bishops accountable if they do not protect children, bishops need to reach out to and help survivors of abuse in their dioceses, and bishops and the pope need to give a transparent and credible accounting of past and current abuses and the church's response.

The church can’t afford to ignore or postpone these steps. The confidence and trust of a rising generation have already been badly shaken. Recovering that trust might be possible, but only if we take our medicine.

A version of this story appeared in the Sept 21-Oct 4, 2018 print issue under the headline: Four things the church must do to respond to sex abuse.