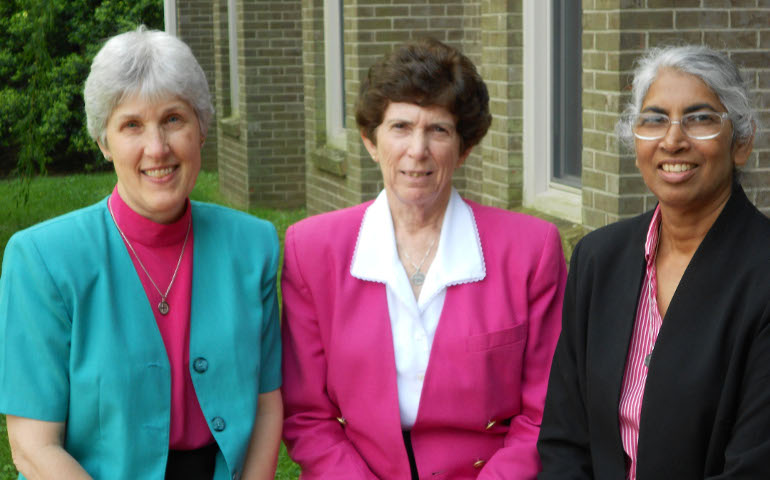 From left, Srs. Susan Gatz, Mary Elizabeth Miller and Teresa Kotturan of the Sisters of Charity of Nazareth (Margie Jones)

They and Sisters of Charity of Nazareth in four other countries all have their stories to tell. Yet it is not simply about one religious community, an international congregation working toward common goals mutually decided. To the church, this bicentennial in Nelson County, Ky., and these sisters' work in India, Nepal, Belize and Botswana reveal afresh what all communities of U.S. women religious have attempted, have achieved and have continued since their founding.

The Sisters of Charity of Nazareth's goal hasn't changed in 200 years, to bring education to the marginalized, especially and significantly, women and girls. Education is co-equal to the other essential Vincentian ministries: health care through hospitals and clinics (India, Nepal), community development (Belize), centers for the mentally challenged (Nepal, India), preschools and hospices (Botswana, India), and on and on.

Dec. 1 will be 200 years to the day since 19-year-old, Maryland-born Catherine Spalding and her five friends responded to a call from Sulpician Fr. (later Bishop) Benedict Flaget for young women to teach the faith. With the encouragement of their de facto co-founder, Sulpician Fr. Jean-Baptiste David (also later a bishop), the six formed the Vincentian community of Sisters of Charity of Nazareth in rural Kentucky -- the American frontier.

David had written to Mother Elizabeth Ann Seton, who wrote of St. Vincent de Paul's injunction to Vincentians, to render "every temporal and spiritual service in their power in the person of the poor, either sick, children, prisoners, and others ... the care of the poor of all descriptions and ages, the sick, prisoners, invalids, foundlings, orphans and even the insane in hospitals and private homes."

The Bardstown diocese (now the Louisville, Ky., archdiocese) under its first bishop, Flaget, covered the equivalent of 10 future states, as far west as Ohio, Michigan and Indiana.

The Sisters of Charity of Nazareth began with a one-room school at St. Thomas Farm, near Bardstown. In North America, across two centuries, the sisters established more than 200 elementary schools, plus high schools, academies and colleges. Every time they opened a fee-paying academy, there was a "free" school nearby for poor girls. There were hospitals (St. Joseph Medical Center in Louisville is one), clinics, homes for infants and children. "These were pioneers, risk-takers, and very hard-working," Miller said. "If something was needed, they were the ones to do it."

While Spalding was re-elected every six years to run the order, its history speaks of many women who brought tremendous talent to bear as educators and organizers. What Spalding could do was lead. When the 1832 cholera epidemic struck Louisville there were no nurses -- Spalding stepped forward. The sisters stopped teaching, temporarily, and nursed.

In the 19th century, the Sisters of Charity of Nazareth continued their focus on Catholic education and health care. They opened Presentation Academy in Louisville in 1831 -- still going strong. In the 20th century, often handing on their schools to parishes or other orders, the sisters spread their wings overseas.

Today's jewels in the crown include Nazareth Villages, apartments for the low-income and elderly created from Nazareth College and Academy buildings. Forty-five of the 145 apartments are market rate. Gatz, finance director, said, "We set aside funds to help people with the rent" in that section. President Miller said schoolchildren, volunteers and sisters are actively involved with the residents. Other jewels include the on-campus retreat center, the Breton Bay, Md., summer camp, used annually by numerous service groups, and the campus itself: It is an Arbor Day "Tree City" -- to date, volunteers have planted 15,000 trees.

The order's diadems are the sisters in other countries.

But what is the net result of all this service?

In the United States, the Sisters of Charity of Nazareth and the other U.S. women and men religious raised up an entire American Catholic population -- and its neighbors -- through education, health care and social services.

"We help pull all the people up by their bootstraps," said Kotturan, of Mokama, India. "Then you have to wait for years to see if they've moved from here to there. To a large extent, after 65 years, we can see it in Mokama -- the diocese with the largest number of employed people. Our sisters set an example of education and what it means to move forward. If you go for Easter or Christmas, you won't recognize the locals, there is a transformation. People have moved up: doctors, professionals, girls with master's degrees in many fields."

And the faith has spread.

A version of this story appeared in the Sept 28-Oct 10, 2012 print issue under the headline: Sisters celebrate two centuries of service.