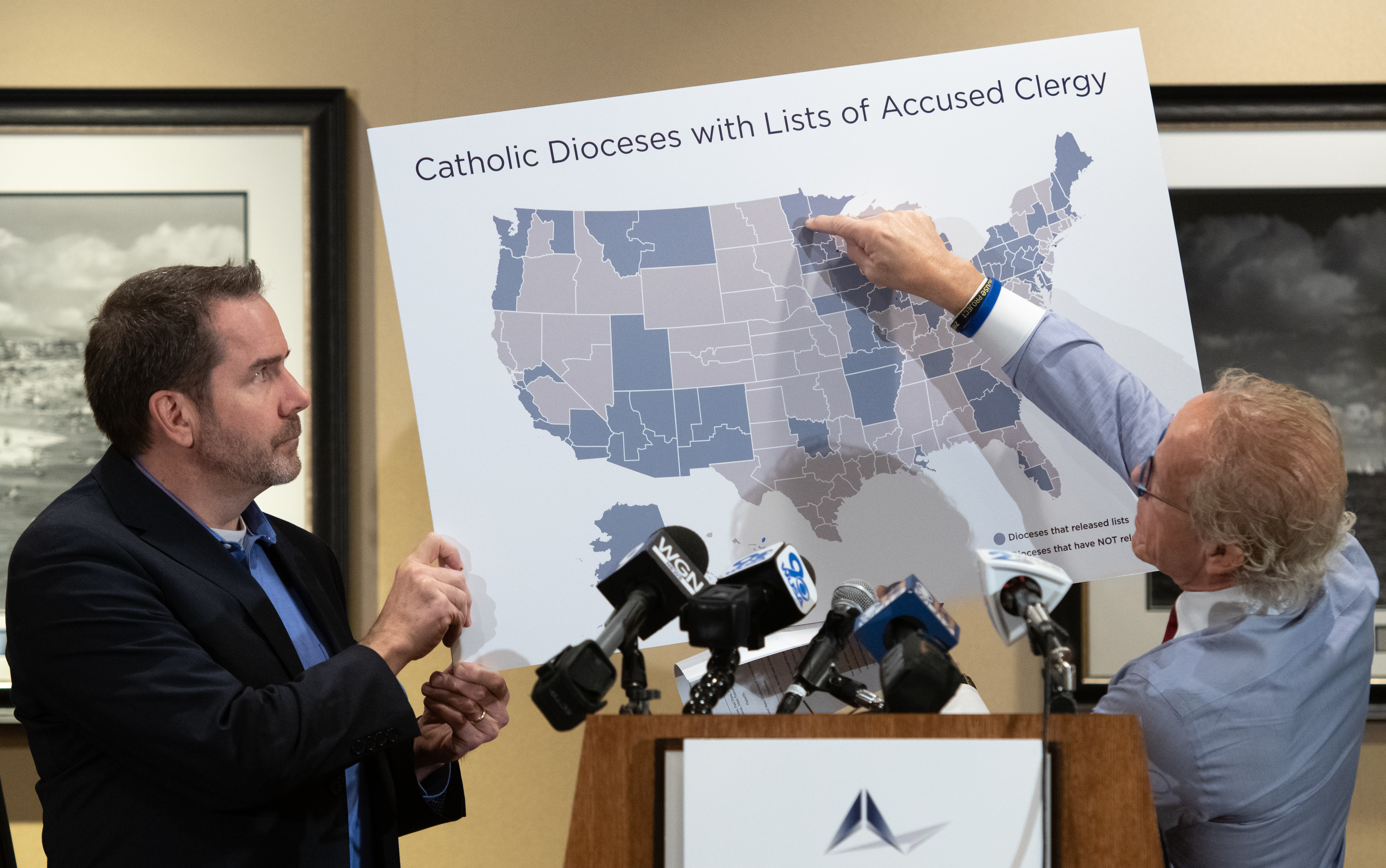 In a news conference near the hotel where the bishops were holding their annual fall meeting in Baltimore, Minnesota lawyer Jeff Anderson gathered three survivors from California, Minnesota and Pennsylvania to talk about the suit filed in federal district court in Minnesota late Nov. 13.

The firm said in a news release that the lawsuit seeks "court ordered disclosure of identities of all offenders and their histories known only to the bishops who continue to keep this information secret."

Also on Nov. 13, a separate suit -- a class-action lawsuit -- was filed against the Vatican and the USCCB in the U.S. District Court for the District of Columbia. That suit is being handled by attorneys from two firms based in Beaumont, Texas, and by two New York lawyers.

The suit filed in Minnesota by Anderson names Joseph Mclean of Minnesota, Paul Dunn of New York, Phillip DiWilliams of Pennsylvania, Darin Buckman of Illinois, and Mark Pinkosh and Troy Franks of California as plaintiffs.

The lawsuit alleges that the USCCB concealed "the known histories and identities from the public, parishioners and law enforcement of clergy accused of sexually abusing children across the country."

The USCCB did not release a response but typically wouldn't respond to a lawsuit.

McClean, one of the survivors at the news conference in Baltimore, said he chose to join the lawsuit because he wants the bishops to "come clean."

"I'm here to protect kids" and to give victims the opportunity to heal, said McClean, who said his abusing priests brushed his pelvis against him during a retreat and kissed McClean when he was 17. Years later, after taking legal action to obtain documents about the priest, he said he discovered that he had done the same to others but was never stopped.

Anderson said there were others out there like that priest, and they pose a "danger that is real and imminent." That's why the lawsuit demands full disclosure of all known offenders in the 196 dioceses across the country, including the 120 dioceses that have not released a list of clergy who may have offended, he said during the news conference.

The church "maintains" a public hazard, said Anderson, who also announced a lawsuit against the Vatican in early October and has taken similar legal action over the years against dioceses around the country.

Also present in the room was a man Anderson identified as Deacon Bob Sondag of Peoria, Illinois, who said he served as a victim assistance coordinator and said "the checks and balances put in place in the 2002 Dallas charter have been compromised," referring to the "Charter for the Protection of Children and Young People," a set of procedures adopted by the bishops to address the sex abuse crisis.

"At times, it seems that protecting the institution is a higher goal than caring for the victims," said Sondag, reading from a statement.

Asked whether it was opportunistic to be unveiling the lawsuit in Baltimore while the bishops were meeting, Anderson said, "Yes, it is opportunistic," but added that it was an opportunity taken in the interest of protecting children.

The class-action suit filed in court in the District of Columbia was announced in Beaumont. It too was filed on behalf of six plaintiffs claiming they were abused by clergy as minors: Timothy B. Lennon, of Arizona; Mark S. Belenchia, of Mississippi; Alfred L. Antonsen Jr., of Illinois; Joseph Piscitelli, of California; Shaun A. Dougherty, of Pennsylvania; and Mark Crawford, of New Jersey.

None of the alleged abuse occurred in Texas, but the Beaumont lawyers said in a statement they "have handled major class action lawsuits for victims throughout the United States over the last 25 years."

The 80-page suit alleges the plaintiffs "were victims of the endemic, systemic, rampant and pervasive rape and sexual abuse perpetrated by Roman Catholic Church cardinals, bishops, monsignors, priests, sisters, lay leaders, members of Catholic religious orders, educators, and other personnel, members, agents and representatives while serving in active ministry -- with the knowledge of the defendants."

It adds that "child sexual abuse committed by the Catholic Clergy has been going on for centuries," citing condemnation of clergy sex abuse action by "the Council of Elvira in Spain" in A.D. 306.

The lawyers say the suit also is a "RICO" case, referring to the Racketeer Influenced and Corrupt Organizations Act, a 1970 law originally designed to target organized crime.

According to the filing the suit seeks "compensatory damages" -- it does not name a sum -- or in lieu of those damages, the plaintiffs want other monies, such as "restitution, economic damages, punitive damages."