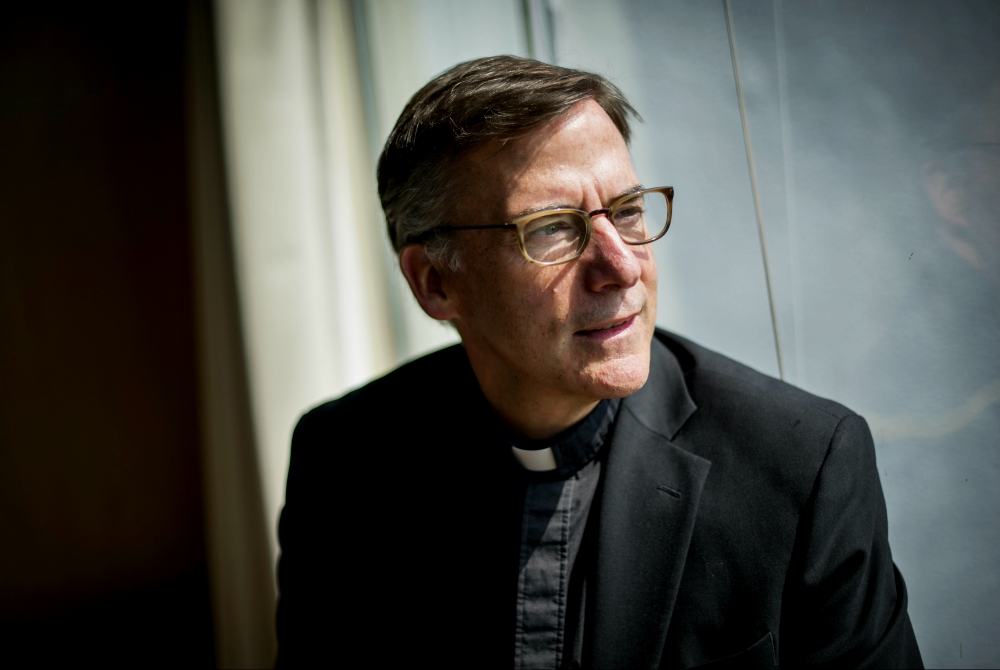 The way Jesuit Fr. Kevin O'Brien remembers, "It wasn't a flash of light from the sky, but rather a slow awakening" that brought him to the priesthood. "I like to say God is patient and I am stubborn."

That graced exchange has rolled out over time and had a lasting effect. It has led this 52-year-old Jesuit to the cusp of the president's chair at Santa Clara University in California.

On July 1, O'Brien, dean of Santa Clara's Jesuit School of Theology in Berkeley since 2016, replaces Jesuit Fr. Michael Engh as he completes a decadelong presidency at the university.

Neither academics nor the Society of Jesus appeared in O'Brien's early career plans, but providence apparently had other notions. Born in Canada, O'Brien moved as a toddler with his family to North Beach, Florida, one three children in an Irish family. His earliest life lessons, he says, can be traced back to his parents. He speaks about the value of service to others that was planted in him as a child. He remembers being taught to give back to the community and that to whom much is given, much is expected.

He had 12 years of private Catholic education and then set off to Georgetown University, where he did his undergraduate work, finishing in 1988 with a bachelor's degree in government.

O'Brien referred to himself than as a "practical person," one who "wanted to make a difference." The way he thought he could best do that would be as a lawyer. He wanted to get into politics. So after Georgetown, he returned to Florida to enroll in the University of Florida Levin College of Law, where he earned a law degree and on the way became an editor of the Florida Law Review. He became a naturalized citizen.

His career path seemed set. He was a successful corporate lawyer at an early age. All was working for him — except he was missing something, a sense of fulfillment, he told NCR during a recent telephone interview. At the same time, he said, he was "becoming more reflective and less reactive."

It was at that time he opened up what would turn out to be a life-changing conversation with the principal of his alma mater, Cardinal Newman High School in West Palm Beach, who asked O'Brien if he had given any thought to teaching. At first, O'Brien dismissed the idea, but later said yes to the offer.

"God," he said, "has a way of getting our attention and sending the right people at the right time. The problem is we often don't realize it at the moment."

Partners at his law firm saw him off, wished him well and said they would hold his post open for a year. They fully expected O'Brien to return. It was not to happen.

For three years, he taught history, political science, economics and religion at the high school. He coached girls soccer and started a retreat program.

"I loved it. I found a passion and a joy in my work I had not experienced anywhere else," he later wrote in the preface to his 2011 book, The Ignatian Adventure: Experiencing the Spiritual Exercises of Saint Ignatius in Daily Life.

Then, at age 29, in 1996, O'Brien took yet another step. He joined the Jesuits. During the next decade, he earned a master's in philosophy from Fordham University, a Master of Divinity, and a Licentiate in Sacred Theology from the Weston Jesuit School of Theology.

Yet, it was the pastoral work to which he was assigned that seemed to be shaping his theological foundations, he said. He especially liked the idea of Ignatian theology intersecting the lives of marginalized people. He told me he sees this theology evolving with the times. "It acts more like a rudder than an anchor."

O'Brien had several opportunities to mix with hurting and needing people. He served as a chaplain for the Jesuit Refugee Service in immigration detention centers in Los Angeles and worked with migrants on the Arizona-Mexico border. He spent time caring for patients in a leprosy hospital in Northeast India and working in Bolivia, Mexico and Guatemala.

Reflecting back on the way his work with migrants and refugees influenced his thinking, O'Brien quoted the late superior general of the Society of Jesus, Fr. Pedro Arrupe, who headed the order from 1965 to 1983 and who founded the Jesuit Refugee Service.

"He said the service would not only be good for refugees and migrants but also for the Society of Jesus," O'Brien recalls Arrupe saying. "It would remind Jesuits of our most fundamental call, which is [seeing] the face of Christ revealed in those who are marginalized."

By 2017, the agency was active in 47 countries and serving close to 1 million people, according to Jesuit figures.

Another way of looking at theology, O'Brien said, is as an extension of God's mercy.

O'Brien cites another fellow Jesuit, Pope Francis, to emphasize the point. "Theologians are now being called to be more attentive to the impact of theology on real people," O'Brien noted, saying that Francis calls them to go beyond a "desk" theology, and pursue "a theology that is always taking into account the communities and persons we seek to serve."

O'Brien was ordained in 2006. Immediately after his ordination, he worked for two years as associate pastor at Holy Trinity Catholic Church in Washington, D.C.

Then he was asked to return to his undergraduate university, Georgetown, in 2008, this time for eight years, the last five as vice president for mission and ministry, leading the interfaith Campus Ministry program. He served as a member of the president's cabinet. A popular educator, students recognized him in 2016 with the coveted Dorothy Brown Award for excellence in teaching.

James Avino, a former student, wrote in an email that he took O'Brien's "Church in the 21st Century" class during his final semester at Georgetown. "It was probably the most impactful experience of my undergraduate education," Avino wrote.

He added that he enjoyed conversations on personal conscience and, in particular, its role in the "Faithful Citizenship" letter the U.S. bishops published before the 2012 election. "That discussion helped shape the way I think about the moral responsibility of political participation and the complexities of voting as a Catholic American citizen."

Former student Hannah Cousino said, "KOB distills complex Catholic theology into simple truths, then encourages us to reflect on them in our own lives. His 'Church in the 21st Century' class gave me the space to connect my faith with a budding interest in education, a career I'm still passionate about today."

O'Brien has also served on the boards of three other Jesuit universities — Seattle University, Marquette University and Boston College.

Since 2016, he has served as dean of the Jesuit School of Theology of Santa Clara University, where is he has been responsible for overseeing the academic, enrollment, fundraising and student-life operations of the 85-year-old Catholic theologate, one of two Jesuit theologates in the United States. The other is at Boston College. 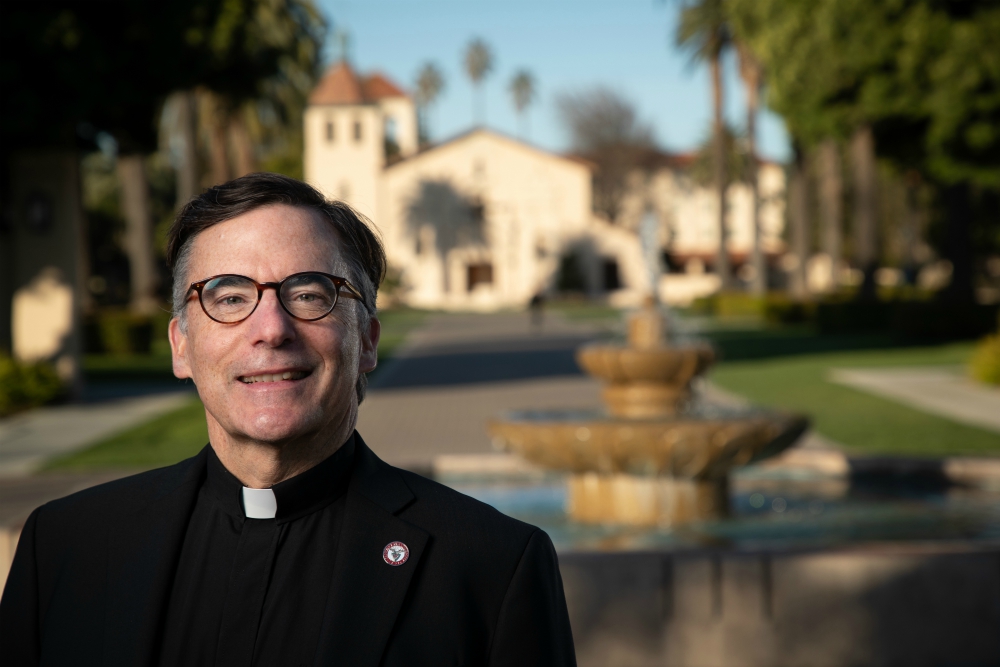 "The thing that impresses me about Kevin O'Brien is his availability," said Fr. Martin Connell, rector of the Jesuit community at the Santa Clara theologate. "The availability to be missioned is a value highly praised among us Jesuits, an ideal that we strive for. People who know Kevin know how happy he was at Georgetown, yet when he was asked to leave that job and serve the Society of Jesus by coming to the Jesuit School of Theology of Santa Clara, he generously set aside his own plans, his own professional trajectory, to meet the needs here. It's just this generosity of spirit, this magnanimity that will help guarantee Kevin's success as the president of Santa Clara University."

NCR asked O'Brien what is the most important lesson he learned at Georgetown and in Berkeley, one that he could apply in his new post at Santa Clara.

The need to encounter, he replied.

And not just any people, but rather "a diversity of people, a multiplicity of perspectives who will enrich the conversation," he said.

O'Brien will face significant challenges at Santa Clara. He joins the university two-thirds the way through a $1 billion fund campaign. Various Jesuit academics said he would need to lure top-ranked students and educators while at the same time promoting accessibility to low- and middle-income students. This involves putting new money both into programs that distinguish academics and into scholarships to widen access to those programs.

As one said, "The temptation is to go after U.S. News & World Report college rankings. But Ignatian education doesn't always line up with the values that go into making those lists. For example, it also involves a dedication to justice, to inclusiveness and asks, 'Education for what end?' "

In the words of Engh, the outgoing Santa Clara president, O'Brien will have to translate into contemporary language the ideals of a Jesuit education: promoting faith, serving justice, pursuing academic excellence and educating the whole person.

Perhaps this involves, to a degree, the next phase of the "awakening," that has been guiding O'Brien's journey.

[Thomas C. Fox is NCR CEO and president. He can be reached at tfox@ncronline.org.]