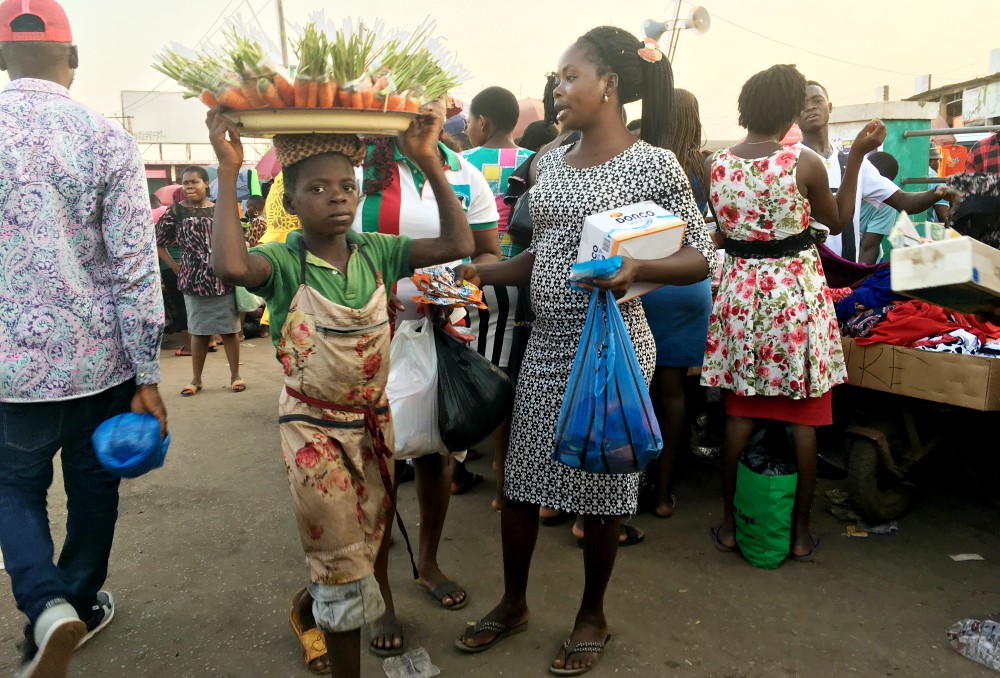 A child hawks carrots at a market in Enugu State, Nigeria. (Patrick Egwu)

When Uzo Obinna turned 10, he stopped going to school because his family could not afford the fees anymore. His mother, a widow and a trader at the local market where they live, bought a bag of oranges from the market, selected some in a tray and handed it to him to hawk in the streets.

Every day, after taking his bath and having breakfast, Uzo leaves their semi-detached room, which he shares with his mother and four siblings, at 9 a.m. He returns whenever he finishes selling the oranges. Depending on how fast he makes sales, he returns home sometimes by 5 or 6 p.m., and gets ready for the next day.

"I want to go back to school but my mother tells me there's no money to send me back to school," Uzo says. "Every day when I'm carrying my oranges in the street, I see my friends coming back from school and I feel angry."

Uzo is not alone. Thousands of children of school age are in the streets across hawking wares or working in unfavorable conditions to support their families. According to the 2019 Global Childhood Report, one in every four children is being denied the right to an ideal childhood — a time of life that should be safe for growing, learning and playing.

Nigeria currently has 13.2 million out-of-school children, according to Nigeria's education board. Also, child labor has remained an issue throughout the country despite the Child Rights Act that was signed into law by the federal government. In February, Nigeria's National Bureau of Statistics, UNICEF and other organizations reported that half of Nigeria's 79 million children ages 5-17 are working, including in hazardous conditions such as hawking wares in the street, begging, and quarrying gravel and granite.

But the Africa Faith and Justice Network (AFJN), a Washington-based social justice organization, is coming to the rescue by advocating for an end to child exploitation and creating awareness on laws promoting child rights in Nigeria.

In 2003, the federal government passed the Child Rights Act into law, prohibiting any form of abuse and violence against children. The law also protects and safeguards children from neglect and various forms of exploitation in families and communities. But out of Nigeria's 36 states, only 24 have implemented it.

"Child labor is growing and we have been working with sisters and other stakeholders and organizations for the past three years to promote the welfare of children and women, especially on ending child exploitation and violence against women," Dominican Fr. Aniedi Okure, the executive director of the Africa Faith and Justice Network, told NCR. "We organize town hall meetings focusing on these themes."

Established in 1983, the network has been working in Nigeria with Catholic dioceses and communities to promote peace, advocate for human rights and advance social justice. Apart from campaigning against child labor and exploitation, AFJN is also working to end abuse and violence against women in Nigeria. Recently, the network held a workshop and advocacy visits to government officials where members campaigned against child abuse and exploitation and abuse of women. 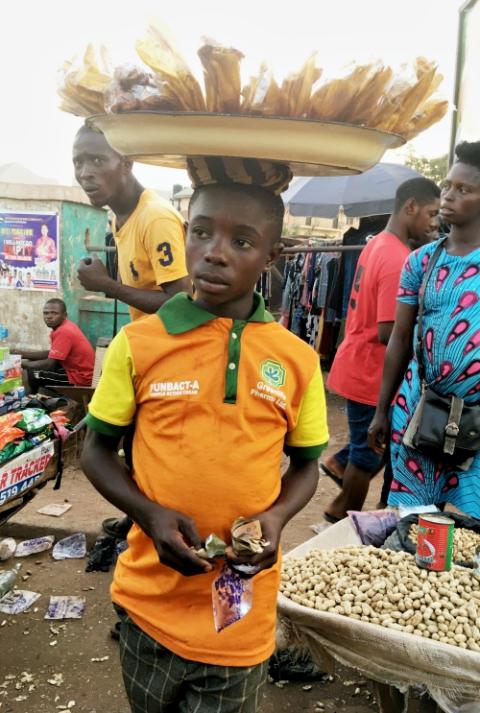 Every day, Arinze Olu, 12, comes to one of the popular markets in Enugu State, South East Nigeria, to hawk fried plantains for his mother after school. (Patrick Egwu)

"We will continue to advocate for children's rights," said Notre Dame Sr. Eucharia Madueke, coordinator of AFJN's Women Empowerment Project. "The children don't even know their rights and that is why we want to educate them to know this and speak out when they are abused."

The work of AFJN is already making an impact. Two weeks after the awareness workshop and advocacy campaigns, the government established 13 protective family courts to deal with issues of child trafficking and exploitation, where children can freely defend their cases in juvenile courts.

But this is not enough. Madueke adds: "When they signed the law, there was no mechanism for implementation and this became a challenge."

"We have undertaken to promote this law and raise awareness in the communities and institutions where we minister," said Holy Child Jesus Sr. Bernadette Eyewan Okure, who is also part of the campaign team. "We have been working in our various capacities to address the problems of violence against women and children, trafficking and other dehumanizing conditions."

Many forms of abuse against women and children undermine the family, the future of the country and the integral development of our children, Sr. Okure says.

In April 2020, the network is planning to hold more advocacies across the country, training more than 100 young people to speak out and become advocates against child exploitation and violence against women.

"We cannot do it alone and that is why we need to train them to take charge of the campaign themselves," Madueke said. "We want to create awareness that this is happening and bring all of them together and examine the impact on the society. Bringing them together is for networking and collaboration because we want our voice to be louder."

Uzo Obinna wants to become a doctor in the future and hopes someone will help him achieve his dreams.

"I don't want to continue selling oranges," he said. "But my mother will be angry if I don't; that is why I'm here."