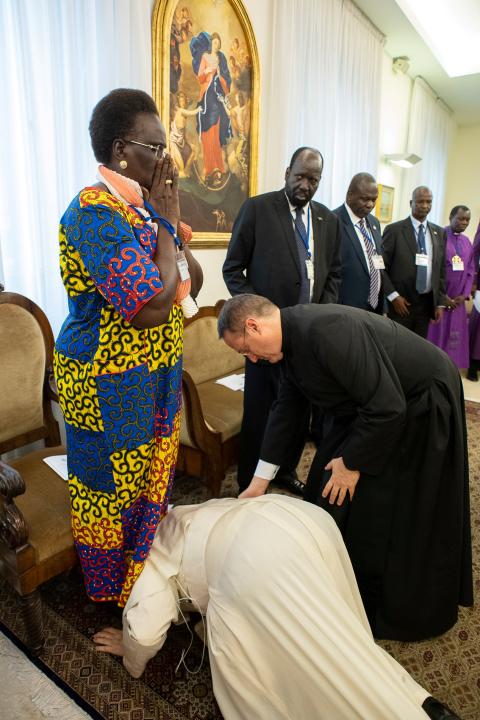 South Sudan Vice President Rebecca Nyandeng De Mabior reacts as Pope Francis kneels to kiss her feet April 11, 2019, at the conclusion of a two-day retreat at the Vatican for the African nation's political leaders. (CNS/Vatican Media via Reuters)

Pope Francis' surprise kiss on the feet of South Sudanese political leaders is the message of Easter, the country's Christian leaders said in a joint Easter message.

The action has resounded across Africa, with ordinary South Sudanese citizens, clerics, politicians and civil society groups celebrating it as a major boost for the fragile peace in world's newest nation. South Sudan descended into a civil war in December 2013 following a political dispute between President Salva Kiir and Vice President Riek Machar.

"His Holiness ... kissing the feet of our leaders, as if to say, I serve you, now serve your people ... was the very message of Easter," the leaders said in the message from the South Sudan Council of Churches. Among those who signed the statement were Catholic Archbishop Paulino Lukudu Loro of Juba, Anglican Archbishop Justin Badi Arama of South Sudan, African Inland Church Bishop Arkanjelo Wani Lemi and Bishop Isaiah Dau, general overseer of the Sudan Pentecostal Church.

The leaders had watched April 12 as Pope Francis repeatedly knelt and kissed the feet of South Sudan's political leaders at the end of a spiritual retreat at the Vatican.

In their statement, the Christian leaders said South Sudan has suffered the force of crucifixion, as the people turn against each other, bringing many to the people to the point of self-doubt.

"The night has been at its darkest," said the council statement. "But then the first point of light on the horizon emerges ... and we are left to only acknowledge and celebrate that the light is with us."

It said God is offering the people of South Sudan an opportunity to end the manmade tragedy through the passion, death and resurrection.

"The choice in our hands; each one of us in South Sudan has the power to choose whether our children will (live) in war or peace," said the leaders. "God's advice to us ... is: Choose life so that you and your descendants may live."

The leaders asked people to commit to pursuing peace as the fundamental condition for ensuring the rights of each individual and the integral development of all people.