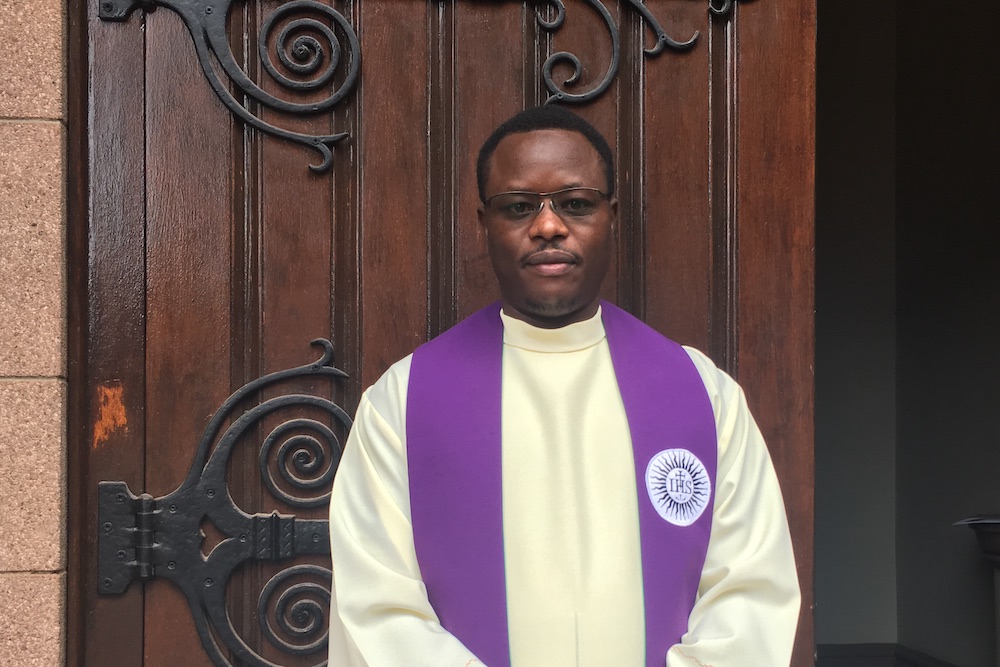 Editor's note: This story has been updated and corrected to note that the Southern African bishops' statement on racism was made in 2016.

Southern Africa's Catholic community has been spurred into action by the global Black Lives Matter movement, with some local parishes hosting anti-bias workshops.

As in the U.S., many in the region were shocked by the brutal killing of George Floyd.

"What should be addressed is the issue of injustice and brutality and taking away somebody's life for nothing," said Jesuit Fr. Nobert Munekani, assistant pastor at Johannesburg's Holy Trinity Catholic Church.

"It is a reality that we live in and we all should stand together and condemn it," said Munekani, whose parish has been running prejudice and racism workshops. "As Catholics, we are pro-life because that is what matters the most."

"We have to start acknowledging the most basic reality of this issue, which is around the world and has caused a lot of indignity, injustice and deaths, too," Munekani told NCR.

More than 26 years after independence and the end of apartheid in 1994, there are still traces of the legacy of racism in South Africa. Some neighborhoods are still primarily white, and others are predominantly Black.

"Because [racism] has not been dealt with in an amicable way, we see the remnants breathing things like xenophobia and discrimination," said Munekani.

There have been past waves of xenophobic attacks across the country, targeting fellow Africans from countries such as Nigeria, Uganda, Zimbabwe and Lesotho. These have seen killings and looting of shops and properties owned by foreigners.

A series of such attacks in 2008 garnered international attention. About 60 people were killed and thousands displaced after their homes and businesses were looted, Reuters reported at the time.

Attackers claim foreigners are taking over their businesses, jobs and bringing crime to their country. The vicious cycle of attacks and anti-foreigner rhetoric has continued, with the latest attacks happening in September, as reported by the Guardian.

"The government needs to deal with this because sometimes it is perpetuated by politics and other agenda," said Munekani.

Nontando Hadebe, a theologian and lecturer at St. Augustine College in Johannesburg, a Catholic institution, said that incidents of racism and xenophobia are not isolated.

"The racism of apartheid is trying to divide South African from the rest of Africa," said Hadebe. "It erodes dignity and divides people, and that is why you have this kind of division planted in the system."

In a 2016 pastoral letter, the Southern African Catholic Bishops' Conference — Botswana, South Africa and Swaziland — said Catholics in the region need to "adequately and seriously address racism and racial divisions."*

The bishops called for a national dialogue on racism and injustice in order to bring healing.

"We need to address the issues of our social trauma as a country which result from the violence of centuries of colonialism and the violent decades of apartheid," said their statement. "We need to dialogue and work together to achieve healing as a nation and acknowledge the link between race, power and privilege."

Munekani said his church began running anti-bias workshops a few months ago "to create awareness to counter racism, xenophobia, homophobia and other such hate crimes." He said that although South Africa's coronavirus lockdown has now prevented the groups from meeting in person, they are continuing to converse through social media.

The anti-racism workshop uses the "see, judge, act" model. Each week, one of the three parts of the model is discussed by parishioners and a selected panel of experts. Parishioners ask questions and a resolution is reached on how to better relate among different races in the country.

"Parishioners gather and they share and describe what they have observed and seen happen in different areas where they live," said Munekani. "The second part is to analyze why are these things happening the way they are happening such as the causes and why it is this way."

The third and final method of the program is the action part, which is how to resolve the issue and bring about lasting solution to the problem of racism in the country. 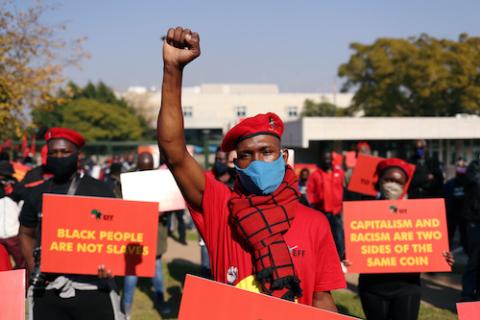 A man raises his fist during a protest outside the U.S. Embassy in Pretoria, South Africa, June 8. (CNS/Reuters/Shafiek Tassiem)

Hadebe said tackling the root causes of racism and xenophobia will be a way to finding an enduring solution.

"It is much deeper than we can see," said the theologian. "We must go back to the issue of slavery that eroded the dignity of Africans and systemic issues such as economic inequalities that create poverty and allow xenophobia to keep happening."

Hadebe said this will be a long-term project. "You are not aiming to solve something tomorrow," she said. "You are looking at history of what actually happened in terms of true justice and what are the mechanisms that allowed the situation to keep going on."

Munekani said that everyone should stand up to confront issues of racial injustice in any guise around the world.

"If human beings can see each other as created in the image and likeness of God, then we can relate well regardless of who the person is," he said.