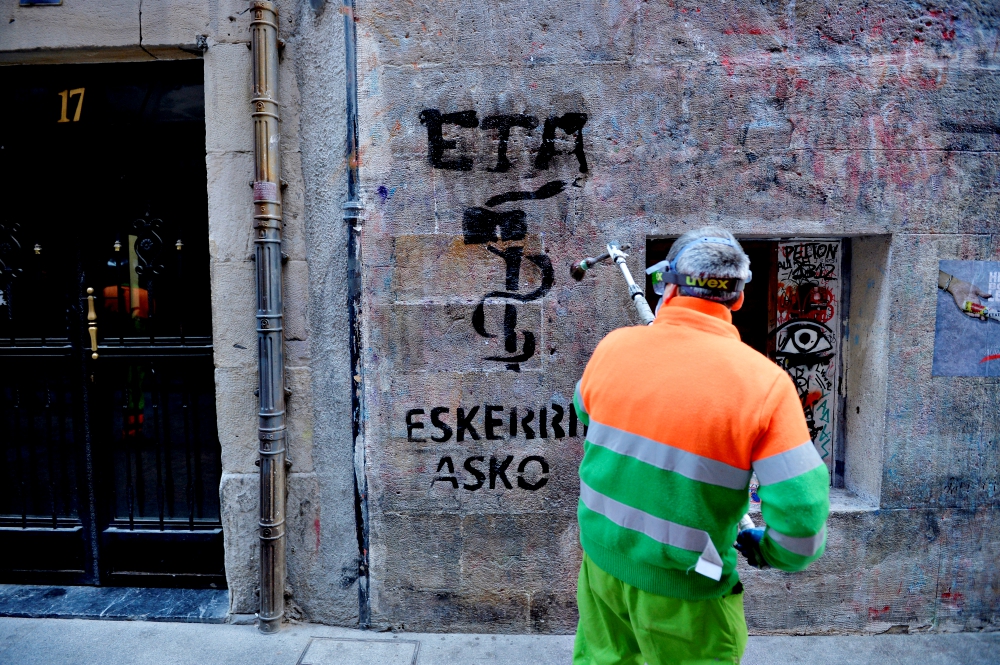 A municipal worker in Bilbao, Spain, on May 5 removes graffiti reading, "ETA, thanks," two days after the militant Basque separatist group ETA announced it had completely disbanded. (Newscom/Reuters/Vincent West)

When Spain's Agencia Católica de Informaciones ran a statement by a leading veteran of the Basque Homeland and Freedom separatist movement (known by its Basque acronym, ETA), declaring his conversion and atonement, it highlighted the challenges facing the church in its response to nationalist violence.

"I'm aware of the moral responsibility that comes with having been an ETA militant for years, but God is my witness that I am profoundly and sincerely repentant," said José Luis Álvarez Santacristina, alias Txelis, who is still serving a 30-year jail sentence, despite breaking with the Basque group some two decades back.

"To give a definite yes to the faith of Jesus of Nazareth meant repenting for my acts, rejecting violence and to saying it all clearly," he said.

Álvarez Santacristina's pledge, first made in a 2017 prison interview with Misión, a Catholic magazine, was republished amid news that ETA, Europe's last indigenous terror group, apologized to its victims and announced it was now totally dismantling. The group killed more than 850 people in five decades of violence for an independent Basque homeland.

The ETA declaration, published on April 20 in Basque newspapers, was welcomed by Catholic Church leaders from Spain's Basque and Navarra regions, who said they hoped peace would now "take root forever," but also pledged solidarity with those caught up in the violence.

"The church has received from Jesus Christ the vocation to be an instrument of peace and justice, consolation and reconciliation, and throughout these years, many men and women of the church have given their best in this task, sometimes heroically," Archbishop Francisco Pérez of Pamplona, Spain, said in a joint message with the bishops of Bilbao, San Sebastián and Vitoria, as well as from Bayonne in neighboring France.

"But we know there have also been acts of complicity, ambiguity and omission among us, for which we sincerely ask forgiveness. As followers of Jesus of Nazareth, we are aware that we are called to a permanent attitude of conversion, humbly serving the truth and welcoming those wishing to embark on a new path."

With tension still running high in the breakaway Catalonia region, however, the Spanish church has to tread carefully.

ETA is listed as a proscribed terrorist organization in the U.S. and European Union and it has broken previous agreements. Its leaders are demanding the release of 243 members imprisoned across Spain under a government "dispersal policy," while dozens of other operatives, mostly hiding out in Latin America, are still on official wanted lists.

Almost half the killings blamed on ETA are still not fully investigated, while victim groups such as Dignidad y Justicia (Dignity and Justice) have pledged to go on demanding retribution.

Organizations like this, not surprisingly, have treated ETA's latest declaration with skepticism and bitterness.

María del Mar Blanco, a conservative member of parliament whose father was assassinated by ETA in 1997, and who now heads Spain's Fundación Víctimas del Terrorismo, dismissed it as "shameful and immoral," an attempt by the group "to whitewash its criminal past" and "manipulate the feelings of Spanish society."

Although ETA has regretted killing civilians, she pointed out, it hasn't apologized for its murder of 443 police officers. Nor has it offered information to help with investigations and identify those responsible or made any admission that its violence hampered Spanish democracy and the rule of law.

"By not condemning its terror record, ETA will merely continue to legitimize its murders with lies and ideological constructions," del Mar Blanco said in a press release. "By invoking conflict theory, it dilutes its own responsibility, implying we have all been responsible for the terror, and opening up a space for its own moral, social and political exoneration."

Founded in 1959 by left-wing students seeking a more militant approach to self-rule, Euskadi Ta Askatasuna (Basque Homeland and Freedom) began its drive for independence in the 1960s during the 36-year dictatorship of General Francisco Franco, when the Basque language and culture were suppressed.

It killed its first victim, a policeman, in early 1968, and went on to target local officials, businessmen, media personalities and academics, as well as police from Spain's Guardia Civil, mixing ultranationalism with elements of Marxism-Leninism.

The group assassinated Admiral Luis Carrero Blanco, Franco's designated successor, in a 1973 Madrid bomb explosion that blasted his armor-plated limousine onto the roof of a five-story block.

ETA stepped up, rather than reined in, its campaign after the post-Franco restoration of democracy in 1978, despite the grant of self-rule to the Basque Country, which is one of the richest of Spain's 16 regions.

The Spanish establishment hit back.

During a "dirty war" with Spain's shadowy Grupos Antiterroristas de Liberación, or GAL, in the 1980s, dozens of counter-killings were attributed to police death squads, as well as more than 4,000 cases of torture — a figure documented in 2017 by the moderate Basque Nationalist Party.

In 2011, four years after sabotaging peace talks with a deadly car bomb at Madrid Airport, ETA declared a unilateral ceasefire and called for dialogue with the Spanish government, adding that it wished "to seize the historic opportunity to reach a just and democratic resolution."

"Sincerely asking forgiveness doesn't force the victim to grant it or even listen to you."

Meanwhile, in its April declaration, published in Spanish, Basque, French and English, ETA said it was sorry for the suffering it had caused as a "socialist revolutionary organization for national liberation," and for "mistaken decisions" that resulted in " victims among people who had no direct part in the conflict."

The Basque dispute "should have been resolved in a democratic and just way a long time ago," the group added. All sides should now "acknowledge and respect the suffering of others" and work toward reconciliation.

ETA's declaration of regret is being handled cautiously.

Spain's center-right prime minister, Mariano Rajoy, has vowed there will be "no impunity" for crimes by ETA militants, nor any relaxation of "efforts to pursue and punish them."

The country's governing Partido Popular is also demanding a tough line, and while support for self-rule remains strong in Basque Country, which already enjoys special fiscal rights, as well as its own language, police and education system, survey evidence suggests a large majority rejects full independence and views ETA's bloody campaign as a failure.

Individual victims of the violence, meanwhile, have questioned the group's motives.

Hortensia Gómez, whose son, Alberto Alonso, a Guardia Civil officer, was killed at age 23 by an ETA bomb in 1986, says the April declaration failed to acknowledge the countless lives left broken by the group's violence.

"They destroyed my family — and now, after so many years, they ask forgiveness. I don't believe them," the 75-year-old widow told Spain's liberal El País daily. "They clearly want something, and I don't think it comes from the heart. I am a Catholic; but when they killed my child, I lost all faith." 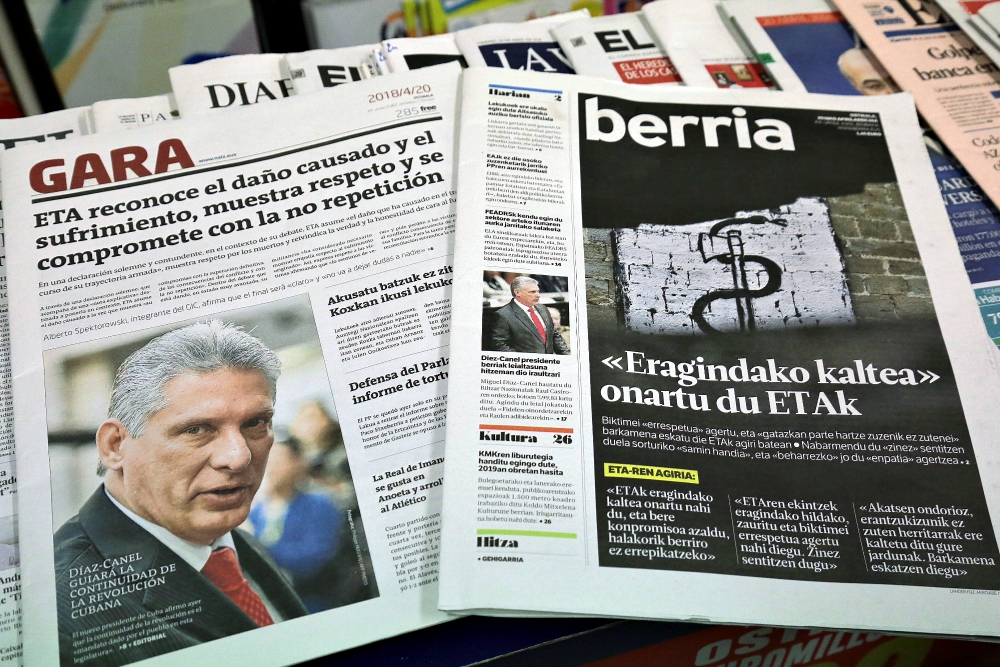 People like this will likely not be reassured by a follow-up statement from ETA, published on May 3 during a discreet ceremony at Cambo-les-Bains in southwest France. The statement insisted the group had now "completely dismantled all of its structures" and ended "all its political activity."

It also vowed, however, that ETA's former members would "continue the struggle for a reunited, independent, socialist, Basque-speaking and non patriarchal Basque Country."

"ETA was born at a time when the Basque Country was agonizing, strangled by the claws of Francoism," the group said.

ETA's show of contrition, combined with defiance, has posed a challenge to the church, which traditionally supports the legitimate rights of national groups, but is deeply cautious about independence demands and totally rejects terrorist violence.

The three Basque provinces, on the northeastern coast, are widely considered the most Catholic part of Spain, with 30 percent of inhabitants attending Mass weekly, at least twice the national average.

Catholics were prominent among ETA's founding generation, which included ex-seminarians and held some early assemblies in local monasteries, according to academic researchers.

The movement drew support from Catholic priests, especially Jesuits, whose founder, St. Ignatius Loyola (1491-1556), was born at Azpeitia, near San Sebastián. Clergy helped keep Basque culture alive under Franco and were radicalized by the resulting repression, in many cases toward the new liberation theology of the 1960s.

In July 1992, when Msgr. José Ramón Treviño, rector of Santo Cristo de Artiga Parish in Irún, was jailed for three years for collaborating with ETA operatives, his sentence was reduced when lawyers pleaded he had acted from "deep relationships of personal affection" and "human principles of solidarity."

However, other priests sheltered ETA fugitives and allowed church property to be used by the movement, according to a detailed July 2015 report in Spain's Bilbao-based El Correo daily, which said at least 20 Catholic clergy in neighboring France were also listed by security officials as having ETA links.

Despite this, Basque church leaders condemned ETA's violence, while Spain's Catholic bishops threatened in 2001 to excommunicate the group's members.

This, not surprisingly, was the position reflected in their responses to ETA's latest announcements.

Msgr. José María Gil Tamayo, spokesman for the Spain bishops' conference in Madrid, welcomed the group's apparent disbandment as a "victory for the Spanish people's democracy," but warned that ETA's request for forgiveness will require reparations, and a recognition that "democratic society and the legal order offer channels for defending one's own ideas."

Meanwhile, the Basque and Navarra bishops have reiterated the "spiritual and social damage" caused by "totalitarian and idolatrous ideologies," and warned that eventual return of ETA convicts should not leave the group's victims "feeling humiliated."

"Our society has to face the challenge of moral reconstruction and reconciliation, and the church wishes to contribute to this task," their joint message said. "True reconciliation is possible only with genuine repentance and a sincere yearning for forgiveness, as well as real disposition to repair the evil."

In his own statement, reissued by the ACI agency to coincide with ETA's statements, former terrorist Álvarez Santacristina, now 64, said that reading the New Testament, with help from a priest, had given him grace to lead his life "on a Gospel path" and begin a "long journey of conversion."

However, he conceded that true repentance required humility and sorrow, an acceptance that the perpetrator was "radically fallible and responsible for evil," an offering of "sincerity, remorse and empathy with the pain of the victim," and a "firm expression of will" never to repeat the acts.

"Sincerely asking forgiveness doesn't force the victim to grant it or even listen to you," Álvarez Santacristina added. "Whoever asks for true forgiveness does not necessarily expect it to be granted, since he is aware of the damage inflicted, and of the sometimes enormous difficulty facing the victim and their relatives."