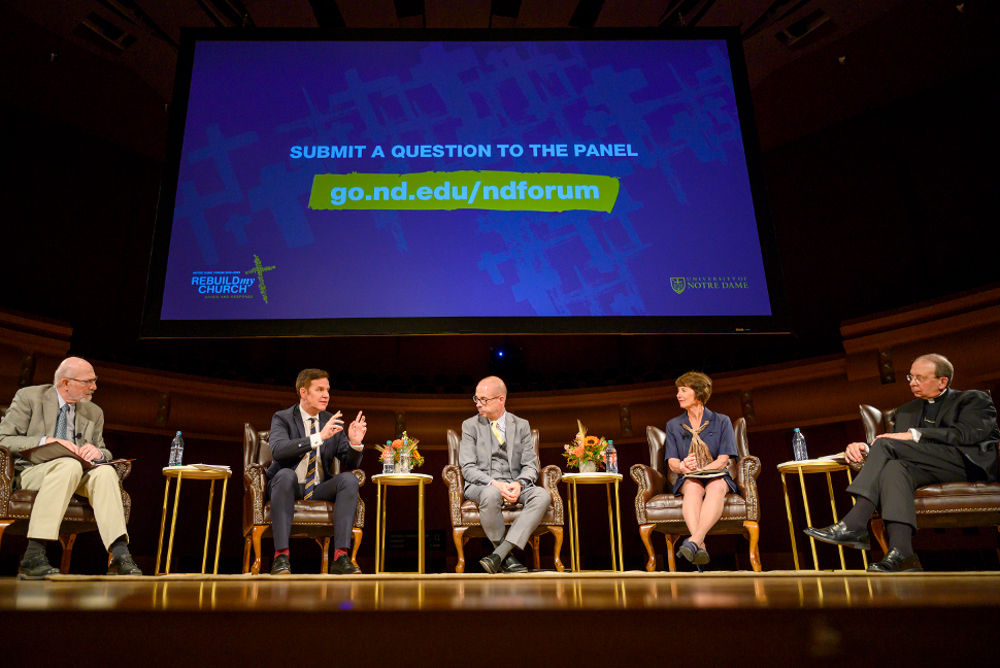 Juan Carlos Cruz, an abuse survivor from Chile and advocate for survivors, gestures as he answers a question during a panel discussion titled "The Church Crisis: Where Are We Now?" at the University of Notre Dame in Indiana Sept. 25. Other panelists are Peter Steinfels, journalist and educator who has written for Commonweal; John Allen, editor of Crux; Kathleen McChesney, a former FBI executive assistant director; and Baltimore Archbishop William Lori. (CNS photo/University of Notre Dame/Barbara Johnston)

Sexual abuse by Catholic clergy continues to haunt not only its victims/survivors but also the entire church, as attention now turns to negligent bishops, abuse of vulnerable adults and related financial scandals, said speakers at a University of Notre Dame event that asked: "Where Are We Now?"

While some praised the progress made in past decades, including declining numbers of new cases and better pastoral support for victims, a survivor on the panel hit back about comments that church leaders have had to experience a "learning curve" on the issue.

"Raping a child has been wrong before Christ, after Christ, in the Middle Ages, and it will always be wrong," said Juan Carlos Cruz, who was abused as a teenager in Chile by a notorious priest who has since been laicized. "We can't wait for bishops to finish their learning curves. Survivors need us now."

Cruz, who met with Pope Francis in 2018 and is credited with helping the pontiff address the issue more strongly, agreed with fellow panelist Baltimore Archbishop William Lori about the need for more lay people to bring their expertise to the decision-making table on the issue.

The Sept. 25 panel discussion kicked off a year of events as part of the Notre Dame Forum titled "Rebuild My Church: Crisis and Response." In November the university will host Malta Archbishop Charles Scicluna, who leads the Vatican's fight on the issue. Other Catholic universities, including St. Mary's in San Antonio and Villanova University, have held or are holding similar events.

Notre Dame's forum is part of a broader initiative on the part of the university that includes up to $1 million over three years to fund research projects that address issues emerging from the crisis.

Results from a first research project, on the prevalence of abuse in Catholic seminaries, was released the previous week, with findings that 6% of current seminarians reported experiencing some form of sexual harassment or misconduct, while 90% reported none.

Panelist Peter Steinfels also emphasized a significant drop in new cases of abuse since the 1980s, repeating a critique of the Pennsylvania grand jury report detailed in his lengthy essay in Commonweal magazine, where he formerly served as editor.

He also said the U.S. church should be "proud" of its zero-tolerance policy and preventative programs.

But other panelists were less optimistic. Cruz noted that while numbers may have gone down in the United States, in other parts of the world "it's gotten worse."

Kathleen McChesney, former executive director of the U.S. bishops' Office of Child Protection, noted that victims are still waiting for "true accountability" and cautioned against "issue fatigue and complacency."

"We can't let our tiredness and our sadness overtake our passion for continuing to work on these issues," she said. 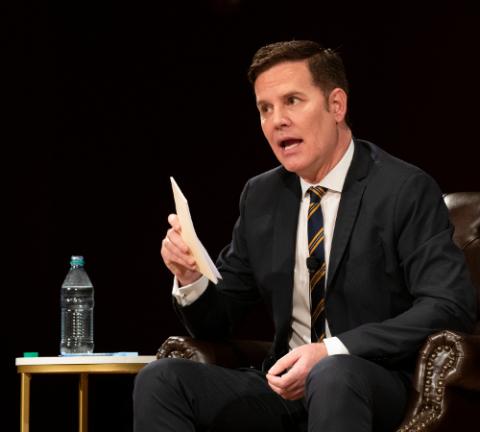 McChesney also urged research into causes in more recent cases and increased professionalism to "break up the logjam" of cases for laicization or trials in Rome. "If companies were run the way the Vatican handles these cases, it would just be atrocious for the world economy," she said.

While recent attempts to emphasize "human formation" in seminaries is good, the more important issue is selection. "To have a healthy presbyterate, you need to start with a healthy man," she said.

A lack of oversight and support for "lonesome" priests also is concerning, she said. "You need people who can help these men who sometimes don't understand what it means to have appropriate adult relationships and to have healthy social lives," she said.

McChesney predicted continued use of this issue for personal and ideological agenda, on both the left and right, which she called "shameful," while Steinfels noted that the scandal has become part of a "kind of Catholic civil war over the papacy of Pope Francis."

It also has "brought to a boil a long-simmering mistrust of the hierarchy by both liberal and conservative camps of active Catholics, each camp with its own agenda for reform," he said.

"Pope Francis wants to solve the problem," said Cruz, who had harsh words for bishops who promise the pope that they will clean up sex abuse in their dioceses but then go home and continue to cover up.

"Why? It's because they're attached to this clericalism, they're elitist and they want to say in power," he said.

"We can't let our tiredness and our sadness overtake our passion for continuing to work on these issues."

Lori said learning to listen to victims has been the steepest "learning curve" of his career, adding that any bishop who says he is responding to sexual abuse perfectly "isn't telling the truth."

He admitted that his "trial run" implementation of new procedures for investigating bishops against Bishop Michael Bransfield of Wheeling-Charleston, West Virginia, were "rough, bumpy and rocky."

"But at least it shows it can work, could work," said Lori. After the investigation, the Vatican took disciplinary action that restricted Bransfield's ministry, although he was not removed from the priesthood.

But a Washington Post story about the investigation's report highlighted cash gifts from Bransfield to fellow clergy, including Lori, which were cut from the report leaked to the newspaper.

Notre Dame's student newspaper, the Observer, expressed concern about Lori's inclusion on the panel, in an editorial before the event.

"The University made no mention of Lori's controversial past in its Sept. 11 press release announcing the event," the editorial said, also noting the university's decision not to rescind McCarrick's honorary degree until after the results of his canonical trial in Rome.

Kathleen McChesney, former FBI executive assistant director who investigated abuse victim allegations, speaks during a panel discussion titled "The Church Crisis: Where Are We Now?" at the University of Notre Dame in Indiana Sept. 25. Pictured with her are John Allen, editor of Crux, and Baltimore Archbishop William Lori. (CNS/University of Notre Dame/Barbara Johnston])

Terry McKiernan, president and co-director of BishopAccountability.org, which tracks reports and data about the sex abuse crisis, attended the Notre Dame event and praised the university for its commitment to examining the issue.

"It was a cautious beginning, but a beginning," he said, adding that he hoped the project would "take more risks" in the future.

Undergraduate student Grace Murphy, a sophomore from Indiana, asked the panel what they would say to young Catholics. "My generation hasn't caused this problem, but we're feeling the effects of it," she said. "I didn't sign up for this, but the choice was taken away from me when the priest at my high school was accused."

"The church will continue to be slow to reform," she said. "Sadly, that is the way the church works."