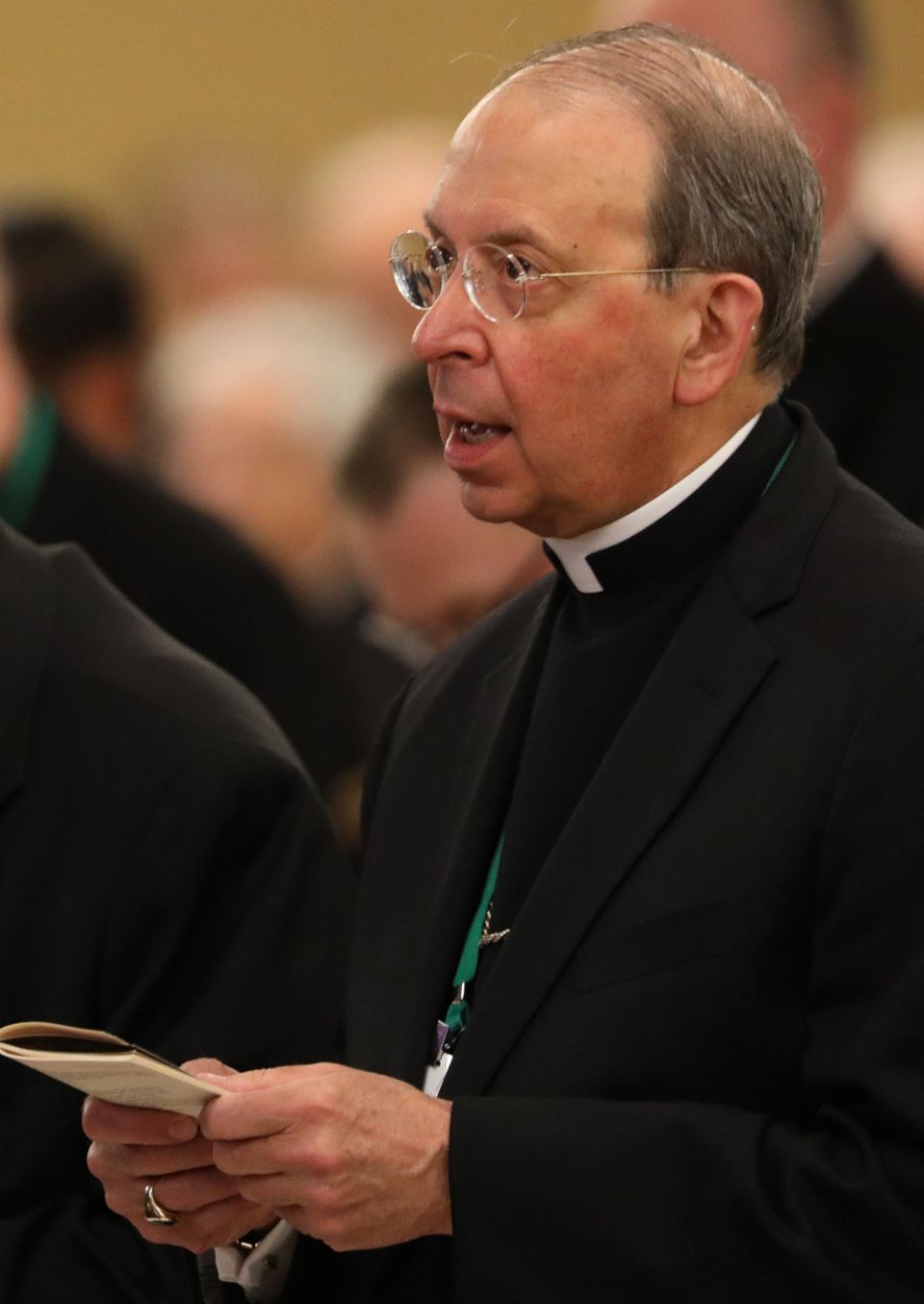 Baltimore Archbishop William Lori sings during opening prayer at the annual general assembly of the U.S. bishops' conference in Baltimore June 11, 2019. Archbishop Lori, who also is apostolic administrator of the Diocese of Wheeling-Charleston, WVa., announced July 17 that the diocese has selected a new external auditor as part of the progress that has been made since Pope Francis accepted the resignation of Bishop Michael Bransfield as head of the diocese in September 2018. (CNS photo/Bob Roller)

Baltimore — The Diocese of Wheeling-Charleston, West Virginia, has selected a new external auditor as part of the progress that has been made since Pope Francis accepted the resignation of Bishop Michael Bransfield as head of the diocese in September 2018.

Baltimore Archbishop William Lori, apostolic administrator since that time, announced the selection of CliftonLarsonAllen LLP – a national financial auditing firm that serves more than 30 dioceses across the country – in a decision made in coordination with the diocesan finance council.

The archbishop said the audit would be published on the diocese's website when it is completed and received.

"I am grateful to the members of the finance council who are working to identify best practices nationally that will help strengthen our financial protocols and procedures and ensure the trust and confidence of all," Lori said. "A commitment to responsible financial stewardship must be a non-negotiable as we deploy diocesan resources to advance the work of the Gospel across the state of West Virginia and to serve critical needs."

In a letter sent July 17 to Catholics in the diocese, which encompasses the whole state of West Virginia, the archbishop acknowledged the breach of trust.

The archbishop said he hears many questions about Bransfield's extravagant spending and credible allegations that he regularly sexually harassed young priests and seminarians, wondering how behavior could go unchecked for so long a time. People also ask whether there is a process to check a bishop's behavior. The archbishop noted that such questions must be confronted locally and nationally.

In June, at their general assembly in Baltimore, "the U.S. bishops took some important steps to do just that by voting to establish a third-party reporting system and other procedures to make it easier to report abuse, harassment and malfeasance by bishops," Lori wrote in the letter.

"I had already put into place a similar system in the Archdiocese of Baltimore and one is now being established in the Diocese of Wheeling-Charleston as well," he noted.

He said that a metropolitan archbishop does not serve in a supervisory role with the bishops with other dioceses in the province, called "suffragan sees."

"The measures adopted by the U.S. bishops call for metropolitan archbishops to investigate complaints about suffragan bishops only when mandated to do so by the Vatican," he said.

"That is why when I received a small number of complaints from parishioners in West Virginia regarding the very visible renovations being done to Bransfield's residence and to the chancery office," he continued, "I was not authorized to conduct an investigation, nor still less to demand a comprehensive financial review."

Instead, the archbishop said, he raised these concerns with Bransfield, who assured Lori that the renovation of his residence, which had been damaged by fire, and to the chancery, which was being converted from a school to an office, were necessary and that these projects were approved by diocesan finance authorities.

"At the time, I had no reason to doubt the bishop's assurance that appropriate diocesan procedures and safeguards had been followed," he said.

Lori said the situation changed dramatically in August 2018 when he received firsthand, credible allegations of sexual harassment and factual evidence of excessive spending and misuse of diocesan funds.

"Though not authorized to investigate the matter myself, I immediately concluded that I needed to bring this direct evidence to the appropriate church authorities in Rome and did so that very same day. I also reported it to the apostolic nuncio, the pope's representative to the United States," Lori said.

The Vatican responded by announcing the acceptance of Bransfield's letter of resignation the following month and appointing Lori as apostolic administrator while charging him to oversee a preliminary investigation of the former bishop so that the Holy See could make a judgment regarding his conduct.

Upon completion of that investigation and the results being sent to the Vatican in February, Lori restricted Bransfield from exercising any priestly or episcopal ministry either within the Diocese of Wheeling-Charleston or within the Archdiocese of Baltimore.

On July 19, the Vatican announced that Pope Francis has taken disciplinary actions against the bishop as a result of those findings. Bransfield is prohibited from living in the Diocese of Wheeling-Charleston, prohibited from presiding or participating anywhere in any public celebration of the liturgy and "must make personal amends for some of the harm he caused."

In his July 17 letter to the people of the diocese, Lori noted that when a bishop is appointed to lead a diocese, it is expected that he will be a wise and honest steward of its resources, and that the church has put into place structures to ensure funds are used well and wisely, including lay-comprised finance councils, a group of priest consultors, investment committees and auditors.

"But here in Wheeling-Charleston, these procedures and processes did not prevent the bishop from misusing diocesan funds," he said.

The archbishop outlined several steps he said are underway, will be taken or are completed to strengthen financial protocols, including: hiring the new external audit firm; reviewing and strengthening diocesan financial policies; and having a more review of all capital projects.

"Reports of Bishop Bransfield's lifestyle and spending habits have also raised questions, not only about his own situation, but also about other bishops," Lori noted in the letter.

He explained that diocesan priests and bishops, unlike priests who belong to religious orders, do not take a vow of poverty. They are provided with the basics of food, housing and healthcare but otherwise "their salaries are rightly modest and follow a scale typically set by a diocesan personnel board." They are expected to manage their own finances, rather than sharing all their resources with the community, as religious orders do.

Some priests and bishops have additional means of support, including family members, book publishing, speeches, etc. As an example, the archbishop noted he also is compensated for his service as the supreme chaplain of the Knights of Columbus, as are other officers of the international organization.

"Excessive financial expenditures and the personal use of diocesan funds by any bishop stands in contrast to those bishops who engage in responsible stewardship of the resources entrusted to them and who abide by the fiscal policies and controls in place to ensure a fiscally healthy church," Lori said.

"I join you in praying for the appointment of a new bishop, a shepherd who will lead the church in West Virginia by reflecting in his own life Christ's example of humility, selfless love and service," Lori said in closing the letter.

A version of this story appeared in the Aug 9-22, 2019 print issue under the headline: What follows the extravagant spending .