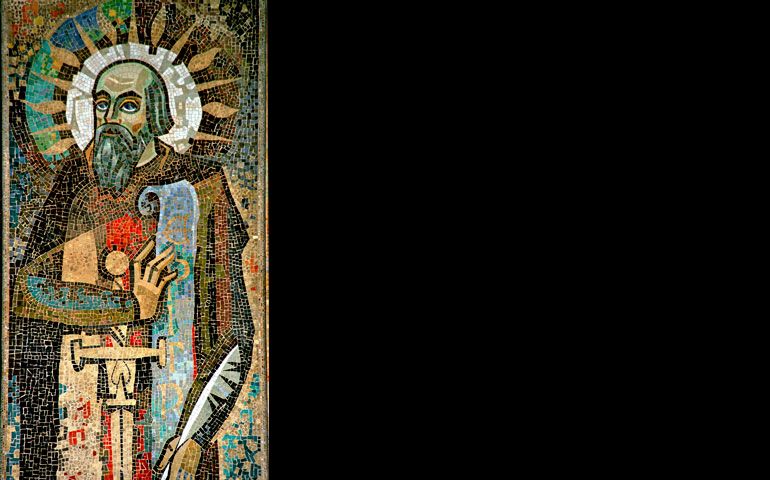 Lately the term stupid has been used quite frequently. On the left, Chris Matthews of MSNBC called himself "not just stupid, but wrong" for making remarks about Hurricane Sandy's potential impact on politics. On the right, after the election, Gov. Bobby Jindal of Louisiana said that Republicans should "stop being the stupid party." Beyond politics and after Sandy, Bloomberg Businessweek had a cover feature that pictured a flooded city street in virtual darkness with the words: "It's Global Warming, Stupid."

Stupid has a religious meaning too. This insight came to me on the 50th anniversary of the opening of the Second Vatican Council, Oct. 11. I live in a Capuchin Franciscan community, where we share faith around each day's Scriptures. The readings for Oct. 11 came from Galatians 3:1-5 and Luke 11:5-13. Both involve the Spirit's power in the community of believers. In this context, to undermine the power of the Spirit by an overstress on the law, Paul said, would be "stupid."

The Galatian church was a non-Jewish community that had no ties to the law. It had been evangelized in the power of the Spirit but later had been influenced to put itself under the power of the law in a way that undermined the integrity of the original Gospel that Paul had proclaimed. The fact that the Galatians had been so easily seduced to come under this law rather than remaining in the Spirit elicited Paul's term for them as "stupid."

The Greek word for "stupid," anontos, is used six times in the New Testament. Galatians uses it twice. The one Gospel passage refers to the Risen One's words to the disciples on the way to Emmaus: They are anontoi and "slow of heart to believe" what has been revealed (Luke 24:25). In Romans (1:14), Paul writes that whether his audience is wise or foolish, he feels an eagerness to proclaim the Gospel. First Timothy equates it with false teachers whose instructions do "not agree with the sound words of our Lord Jesus Christ and the teaching that is in accordance with godliness" (1 Timothy 6:3). Finally, the Letter to Titus urges church leaders to declare, exhort and "reprove with all authority" (Titus 2:15) so that the people do not revert to the "once foolish" ways of living, but instead be reborn and renewed "by the Holy Spirit" (Titus 3:5).

From the above texts it seems that anontos refers to believers who have reverted to some "other gospel" or teaching that is undermining the integrity of the Spirit-grounded Gospel they once embraced. This certainly represents the case in Galatians. Unnamed "Judaizers" (Galatians 2:14) had effectively undermined Paul's Gospel about the death, resurrection and embodiment of the Spirit of the Risen One in the community by an overstress on the law. Today we might call them the "Romanizers."

As we continued our reflection, we came to identify these Romanizers in our church as those who insist on another gospel for Catholics that is overly law-based rather than one committed to the creation of a new society through the power of belief in the Spirit at work in the community. Thus, while Paul envisioned a new order in the world through the church (Galatians 3:25ff) wherein there would be neither Jew nor Greek, today's Romanizers too often link the "new evangelization" to a Western brand of Christendom rather than a new global way of being church that transcends all forms of ethnicity. Where the Gospel proclaimed by Paul challenged categories of slave or free, today's Romanizers seem obsessed with controlling our faith so that theological freedom is denied, resulting in slavery to laws around works of the flesh rather than promoting the fruits of the Spirit. And, finally, where Paul theoretically (if not behaviorally) envisioned a Spirit-led community that eliminated male/ female categories, today's Romanizers still preach a God whose will it is that the church continue to be characterized by patriarchy.

The Judaizers of Galatians 2:14 were never named. However, their legalistic reach was so extensive that it incurred Paul's wrath. Similarly, we discovered at our prayer that with today's Romanizers the results have led to a stupefaction of many in the church. An insistence on a return to a legalistic way of understanding and being church has undermined the vision of the Spirit-led Gospel outlined by the fathers of the Second Vatican Council. However, unlike the Galatian church, which seemed to have been almost entirely stupefied, today we find that while some have embraced this Romanizing, many more are either confused or angered by it while millions of others have simply abandoned it.

Further reflection on the day's Gospel led us to see that too often now we have "fathers" who are giving us stones and scorpions rather than the Holy Spirit. And just as Paul wondered what had happened in the Galatian church, we can ask the same question today about our Catholic church: Have we become stupefied by the law of these fathers in a way that is actually undermining the integrity of local churches in order to preserve laws around a priesthood that is only male and celibate (at least in the Latin Rite)? Rather than protesting we find a stupefied silence.

This thinking led me to recall an incident that happened at the end of a three-day conference I gave to a diocese's presbyterate. My topic was ecclesiology.

I was told about the diocese's commitment not to close any parishes in order to preserve its familial, rural nature. However, it already had fewer priests than parishes. Data also showed that within 20 years only half of the parishes would have their own priest.

Toward the end of my remarks, the bishop said something like: "Mike, we've heard about your ecclesiology and thank you. Now, given what we've shared with you, what would you say to us about our future?"

To this I responded: "Bishop, do you really want me to say what I think?"

I began by recalling the data he and others had shared with me about the same number of parishes but an ever-dwindling number of priests. I then said something like: "This is what I would do. I would have a two-pronged approach. First, I would take sufficient time to form all the people in good ecclesiology, especially eucharistic theology. Once all the stakeholders seem sufficiently formed and informed, I would notify the various ecclesiastical authorities involved that I am giving them one year to change church law to enable married men to be ordained priests. If they refuse, I would go ahead and ordain those existing deacons who are brought forward by the people and expand the candidates from there."

Dead silence met my suggestions. However, I might also add, my thoughts did not elicit any reaction that might indicate my suggestion was "stupid"!

Such silence makes me ask: What stupefaction has taken place in our church that allows fear of some unknown or unnamed Romanizers to insist on manmade rules that are undermining existing eucharistic communities around the world? Are these laws for the good of the people or to preserve the rule and rulers of celibate patriarchy?

For many years Pope Benedict XVI has bemoaned the fact that the Catholic church seems composed of children who have not grown up in the faith. While he has not used the word stupid, he has called for a maturation of faith based on a personal relationship with Jesus Christ. I believe that if we would be grounded in this kind of faith, we could begin to get our priorities in order. This would start with the realization that it's more important to have vibrant eucharistic communities than preserving a manmade law that says the presiders must be celibate. Given the statistics of ever-declining numbers of Catholics participating in their parishes, not to move in this direction would be considered stupid by most thinking people. If we don't change, we will continue having the fathers give the children stones and scorpions instead of the Spirit.

[Michael H. Crosby is a Capuchin Franciscan priest living in Milwaukee. His latest book is Repair My House: Becoming a "Kindom" Catholic.]

Perspective | Does Paul's adjective for the Galatian church apply today?