Dominican brother sees prayer dances as an avenue to other faiths 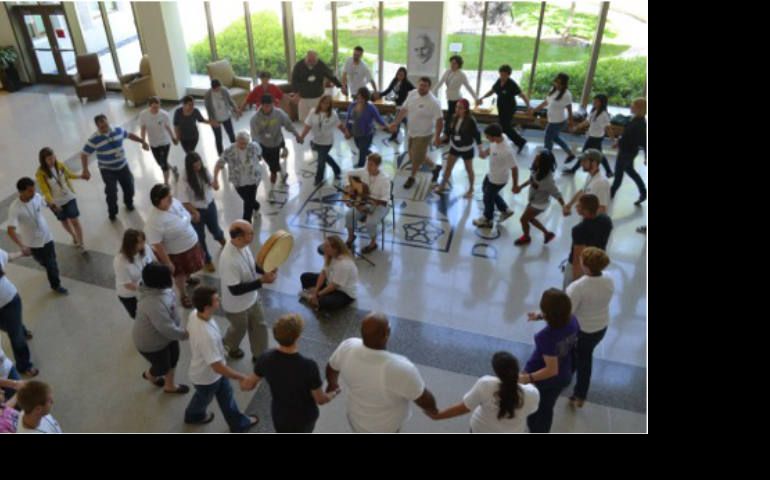 On Sunday afternoon as Pope Francis, Israeli President Shimon Peres and Palestinian President Mahmoud Abbas call upon their God during an interfaith prayer service for peace at the Vatican, a Dominican friar in Oak Park, Ill., will be present in spirit with them.

The Middle Eastern languages of their prayers will be old friends to him. Many years ago, Dominican Br. Joe Kilikevice, an interfaith retreat leader and founder of the Shem Center for Interfaith Spirituality, incorporated the Hebrew word "Shalom" into an original chant and circle dance. The Islamic name for God, "Allah" is a reassuringly comfortable companion, as well.

"I realized some time ago that something deep inside of me was changing when I started to pray Muslim prayers," Kilikevice told NCR in an email. "Simply referring to God as Allah softens my heart and opens it to hospitality for all people."

Speculating about Sunday's prayer summit, he wonders whether the two leaders can "cross that bridge" to not just witness each other's prayer but join them. He also questions if they truly realize that "you don't have to give up your own faith tradition to be enriched by the traditions of other people?" -- an assurance he often brings to his retreat groups around the country.

Kilikevice has been breaking open the treasures of Hebrew, Arabic and Aramaic prayer chants since the 1960s, when he first encountered the groundbreaking Vatican II document, Nostra Aetate, which underlines the religious connections among Jews and Catholics and encourages the church to dialogue with other world religions.

Later, he was further buoyed to pursue interfaith work by the words of Catholic theologian Hans Kung, that there can never be peace among nations unless the religions of the world are also at peace.

In 1986 Kilikevice was heartened a third time, when his own Dominican congregation in their general chapter challenged themselves to assure that "religious dialogue must be the definitive carrier of God's revelation and liberation of people, free of all oppression and prejudices," the friar said.

Kilikevice said that the pope's invitation to Peres and Abbas during his May trip to Israel has given him hope "for a solution to the conflict." Drawing upon the thoughts of theologian Diana Eck, Kilikevice believes the best scenario for the Sunday prayer summit will happen if the participants are truly able to leave behind their own faith's exclusiveness to move into "that place of transformation where one truly meets the One who is the God of peace, justice and compassion."

One word for that place of transformation is "shem," an Aramaic word that means "expressing the radiance, splendor and beauty of the Creator found everywhere in creation."

A significant part of Kilikevice's ministry has been bringing the Aramaic language to people through dance. He draws upon the Aramaic Jesus work of Neil Douglas-Klotz, a Chicago-born journalist-turned spiritual teacher and co-founder of the International Network for the Dances of Universal Peace, a venue for peacemaking through the arts.

On the Shem Center's website, Kilikevice explains that the peace dances are a form of prayer "that creates community, while inviting participants to experience with breath, voice and body the spiritual wisdom found in ancient sacred phrases and their meanings."

Kilikevice has been dancing in these circles since 1968. He discovered them during a retreat in San Jose, Calif., when someone suggested they go Sufi dancing. Not having a clue what it entailed, he went and ended up loving it. He told NCR he later learned that chant and dance can "awaken a powerful, experiential response that takes people beyond what a verbal recitation does."

In the years that followed, Kilikevice located other dance meetings where he was. While teaching in 1983 at Holy Names University in Oakland, he met Douglas-Klotz, who became one of his mentors. At the time of their first meeting, Douglas-Klotz was just beginning to translate the teachings of Jesus from the original Aramaic. The transliterations would later appear in his first book, Prayers of the Cosmos, published in 1990.

For those familiar with his work, Douglas-Klotz's Aramaic renderings of the Lord's Prayer and the Beatitudes roll back a wieldy linguistic stone, revealing a gloriously illuminated cavern brimming with insightful gems not available in the ancient Greek language Scriptural translations.

In the Lord's Prayer, for example, "Our Father" becomes "O Breathing Life, your Light Shines Everywhere," and "Forgive us our Trespasses and we forgive those who trespass against us," becomes "don't let surface things delude us. Loose the cords of mistakes binding us, as we release the strands we hold of others' guilt." In the Beatitudes, "Blessed are the Peacemakers," becomes "Ripe are those who plant peace each season; they shall be named the children of God."

Kilikevice took the dances as they were being developed back to Holy Names and taught them to students there. He eventually co-facilitated Aramaic retreats with Douglas-Klotz for several years, before founding the Shem Center in 1993 and moving into his own interfaith outreach work.

The Aramaic dances remain a major part of the Dominican's dance repertoire. A few of his fellow friars in his Chicago community have joined during retreats, though that's more exception than the norm.

"At times I experience approval from the friars and at other times, benign neglect," Kilikevice said.

He often teaches them to students attending Dominican high schools and colleges, as well. In 2000 Adrian Dominican Sr. Pat Brady and Amityville Dominican Sr. Gina Fleming invited Kilikevice to lead dances at a high school retreat to represent "the diversity of ways Dominicans preach," he explained.

"They knew of my work and thought the students would both enjoy and benefit from a contemporary way a Dominican was claiming a centuries-long tradition of praying with the body," he said, noting that Dominicans have also brought the body into prayer through bowing, prostrating and processing.

Two years later, when the student conferences were expanded into Dominican colleges, Kilikevice became a regular presenter there, too. In 2011 he received the Sister Pat Brady award, with Brady crediting him for encouraging the Dominican order to realize "dance and music as a medium of peace and harmony.

"Brother Joe has taught us that world understanding begins with a willing, open and accepting heart. He has truly released the Spirit in each of us," she said at the ceremony.

"Something magical happens," said Soher, who also co-directs the National Catholic Sisters Initiative at St. St. Catherine University in Minnesota. "Joe teaches them to really be in the present moment, to be in the presence of the Divine, with each other. If they are carrying grief, sadness or stress, the dances provide a body-soul-mind-break for them."

Soher said she has witnessed the dances as a vehicle for helping to build bonds and strengthening community among the young people.

For Fleming, Kilikevice's dance leading has been "a prayerful experience. Asking us to look into each other's eyes has touched me deeply." His teachings have likewise provided her with a better understanding of the Muslim religion, she said.

And as for the Aramaic, "it's a part of me now," said Fleming. "Studying the words of Jesus in his original language awakens you to a different way of thinking."