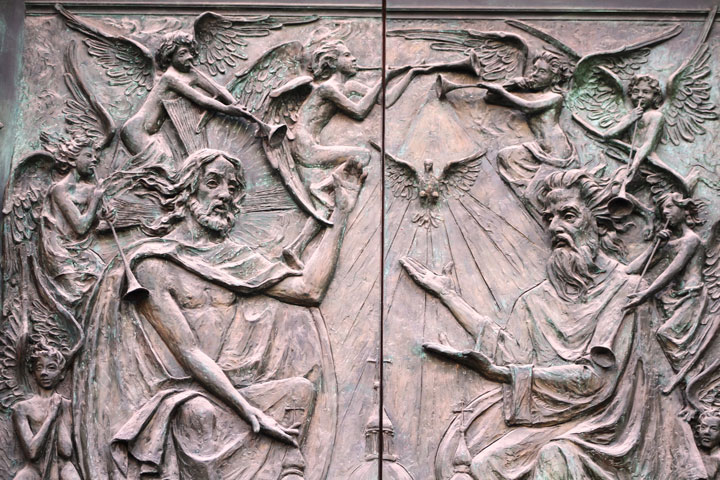 The Trinity is depicted on the doors of Almudena Cathedral in Madrid. (Wikimedia Commons/©José Luiz Bernardes Ribeiro)

Although I am a male religious, I must admit that I too have focused (a lot but not intensely) on "conscious evolution." The more I've investigated its premises, the more I find it helpful, especially as I engage the many questions about faith that science raises. It also has helped me as I seek credibility (and believability) as a Catholic religious and priest called to proclaim our faith in a world rapidly being defined by new insights arising from physics, neuroscience and cosmology.

When I tell other religious and priests that my exploration of these ideas have made me more conscious of how the Trinity and Christ constitute the source and summit of everything in creation, I sometimes find their first reaction is skepticism or fear. However, when they truly examine the idea for themselves, their resistance turns to enthusiastic acceptance. One example might show what I mean. It involves a group of women religious, a U.S. province of an international congregation whose leadership belongs to LCWR.

Because I had explored some of these ideas in my recent book Repair My House: Becoming a "Kindom" Catholic, I was invited to the province. The book had outlined three related points:

The workshop's theme was "How Can We Evolve in Consciousness of Our Connectedness in the Cosmic Christ?" I used a model I've developed that shows that the "economy of salvation" involves us evolving in our consciousness to realize that God's plan for the universe is that Trinitarian and cosmic patterns become embodied in the church and world of today.

As I shared my faith and insights using the Scriptures and Franciscan sources, I felt little or no resistance. Instead, I felt much enthusiasm. Our time together, a member of the provincial council told me later, was successful. A sign of this, she noted, was that it was actually the main topic at subsequent meals. Later she wrote to me: "We in leadership have noted that the sisters' attitudes have changed to a much more hopeful and open-mindedness."

One might ask why a priest like me was led to move in this direction of learning about conscious evolution. Briefly, it was an interview in The Wall Street Journal. The special millennial edition for Saturday, Jan. 1, 2000, included conversations with many experts in various fields. While all were fascinating, the one commanding my attention was the interview with Edward O. Wilson.

Wilson won two Pulitzer Prizes for his works on human nature and community while at Harvard University's Museum of Comparative Zoology. Noting that Wilson had once written that "the predisposition to religious belief is the most powerful and complex in the human mind," The Wall Street Journal interviewer asked him: "How can religion possibly survive what science is doing?" The interviewer's bias, it seemed to me, was clear: Religion is not only irrelevant; it has a short lifespan for any who are truly aware of what science is telling us about our world.

Wilson answered: "The more we understand from science about the way the world really works, all the way from subatomic particles up to the mind and on to the cosmos, the more difficult it is to base spirituality on our ancient mythologies."

Reading his words elicited something visceral in me: I will not be part of something that many consider irrelevant. At the same time, though, it immediately made me realize I myself had to do a lot of rethinking about how I would communicate the basic tenets of my faith. This invited me to think deeply about how the ancient truths I believed about Catholicism could be understood, believed and witnessed in our contemporary world.

What I accepted as a personal challenge, I have since discovered, invites a similar faith-filled response about conscious evolution from all religious and priests at all levels in our church if we are going to preach the Gospel and proclaim our Catholic faith effectively to our contemporaries.

Wilson's use of the word "mythologies" is not pejorative, especially if we realize everything we profess in the creed, by definition, involves analogous faith notions about God and revelation. The realm of faith involves myth; the realm of science involves fact. Science involves what is observable; religion reflects what is not observable but is, nonetheless, believable.

When religions and religious leaders insist on equating articles of faith and religion's "ancient mythologies" with demonstrable facts as though these are objectively verifiable, faith, by definition, will suffer, and religion will become increasingly irrelevant.

Wilson's statement challenged me like few other things in my many years of preaching and writing. However, rather than being threatened or defensive, I was inspired to begin a unique pilgrimage into a deeper understanding of the truths of my faith. This involved a revisiting of the two great canticles in chapters one of Colossians and Ephesians. Here we read about the Cosmic Christ who is the image of the Trinitarian God and, as such the archē (architect and archetype) of everything in the universe. Recent popes, especially Pope Benedict XVI, have stressed the cosmic dimension of these "twin" canticles often attributed to St. Paul.

My faith journey also made me realize that the Word's enfleshment in creation, the Incarnation and the Resurrection must now find its continued embodiment in all the members of the body of Christ. This demands that we continually evolve into ever deeper consciousness of our need to incarnate a new cosmic order (2 Corinthians 5:17). Consciousness of this reality invites us to evolve in our relationships and institutions from the "old order" of sexism, ethnocentrism or classism (Galatians 3:27) to ever greater forms of equality reflecting the Trinity.

My journey also has found me reviewing all the "Son of Man" passages, especially those in the New Testament. Here Jesus uses the image to refer to himself as the pre-existent, representative figure who will return in cosmic glory. This investigation has led me to believe that a contemporary interpretation of the phrase, consequently, could mean that Jesus was/is the "Cosmic One."

My journey has not been without obstacles, but I do think I am becoming more credible in the way I am now articulating my faith from "what we know from science about the way the world really works." In the process, I have been nurtured immensely by the theological humility evidenced by Pope John Paul II more than 25 years ago in his letter to Jesuit Fr. George Coyne of the Vatican Observatory:

If the cosmologies of the ancient Near Eastern world could be purified and assimilated into the first chapter of Genesis, might not contemporary cosmology have something to offer to our reflections upon creation? Does an evolutionary perspective bring any light to bear upon theological anthropology, the meaning of the human person as the imago Dei, the problem of Christology -- and even upon the development of doctrine itself? What, if any, are the eschatological implications of contemporary cosmology, especially in light of the vast future of our universe?

The now-St. John Paul seems to assume that an evolutionary consciousness is essential if our Catholic faith will be credible today. How else can one interpret his question about "an evolutionary perspective" offering "light to bear upon theological anthropology, the meaning of the human person as the imago Dei, the problem of Christology -- and even upon the development of doctrine itself"?

While "conscious evolution" remains a huge challenge for theology and religious leaders, I also think the latter part of Müller's concern also needs to be addressed, namely that "the fundamental theses of conscious evolution are opposed to Christian Revelation and, when taken unreflectively, lead almost necessarily to fundamental errors regarding the omnipotence of God, the incarnation of Christ, the reality of Original Sin, the necessity of salvation and the definitive nature of the salvific action of Christ."

I hope to address the cardinal's concern in a subsequent contribution to NCR.

[Fr. Michael Crosby belongs to the Midwest Province of the Capuchin Franciscans. His website is www.michaelcrosby.net.]

A version of this story appeared in the June 6-19, 2014 print issue under the headline: Evolutionary consciousness points to a Trinitarian cosmic order.