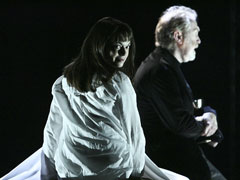 LOS ANGELES -- Mention the word "exorcism" to most people, and you get descriptions of levitating bodies, spinning heads, oozing green bile and hissing serpentine tongues. But don't expect to see these eye-popping visual effects in this summer's stage version of "The Exorcist" at the Geffen Playhouse in Los Angeles.

Instead, the production will have "minimal" special effects, according to playwright John Pielmeier, who adapted William Peter Blatty's best-selling 1971 novel for the stage.

"I didn't look at the movie when I was doing this adaptation. It's all the book," Pielmeier said.

Pielmeier says that his version needs no spinning heads or green bile. Instead, there will be a simple set with a minimal cast. And rather than revolve around a young girl's demonic possession, the story will focus upon a series of clever debates between the demon and the priests.

"The fact that the devil can lie and loves to lie is a great toy for a dramatist to deal with," he says. "I think the irony of how Satan functions in this piece is delicious."

The "Exorcist" story of a young girl's demonic possession and the Catholic priests who try to save her became a box-office hit when the movie was first released in 1973 and later spawned two sequels as well as two prequels. There was even an "Exorcist" parody in 1990. 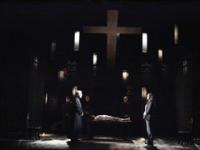 The legacy continues in this stage version, which opened July 11 at the Geffen. Brooke Shields stars as Chris MacNeil, whose daughter becomes a victim of demonic possession, along with veteran actor Richard Chamberlain as Fr. Merrin. John Doyle, Tony Award-winning director of Broadway's revival of "Sweeney Todd," directs.

Pielmeier, the 63-year-old playwright and author of both the stage and screen versions of "Agnes of God," describes himself as "a rather confused ex-Catholic" who wrote this play as a way of working out his own religious conflicts. Catholicism "is still with me," he explains. "I was raised in a very devout family and was a very devout child. And it doesn't go away."

He says "The Exorcist" is for doubters and nonbelievers who might initially scoff at the idea of demonic possession.

But rather than trying to convince people that Satan is real, Pielmeier hopes to show how the devil actually drives people into the light. The more terrible his actions, the more people will rise against him. "In this instance, what [Satan] is really doing is driving people closer to God," Pielmeier says. "And he would be the last person to admit that he's doing this."

Author Blatty has said he's not even sure that Satan exists. But Blatty, the 84-year-old Catholic screenwriter and director of "The Ninth Configuration" and "The Exorcist III," believes God's power over evil is a testament to religious faith.

" 'The Exorcist' offered some evidence for the reality of spiritual forces and finally a God," he said. "The story helped people to believe in God."

Fr. Gary Thomas, a Vatican-certified exorcist and the real-life counterpart to the Colin O'Donoghue character in last year's film "The Rite," agreed that exorcisms can be a reaffirmation of a person's faith in God. "For a nonbeliever, I would say there's great conversion. For a believer, it can be an affirmation of what they already believe," he said.

"There is no green pea soup or spinning heads," said Thomas, the 58-year-old pastor of Sacred Heart Parish in Saratoga, Calif. "That's Hollywood's way of making a visual connection. There is drama attached to it. But it's not meant to be showy. It's meant to say to the demon, get out!"

Pielmeier also points out how the story of "The Exorcist" is relevant today. "I think the piece is very much about terrorism," he explains. "I think the devil is a terrorist. That's a line in the play. The devil functions as a terrorist by disseminating fear and doubt. His power comes from making us afraid and from instilling doubt and despair in us."

For Lent, read the Gospel, fast from gossip, pope says at Angelus