In the footsteps of saints, contemplative tradition persists on Lindisfarne 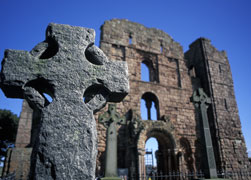 In central London, a stone's throw from St. Pancras rail station, is one of the world's largest libraries, container of national treasures including the Lindisfarne Gospels, begun about the year 700. Recently another Anglo-Saxon Christian treasure, which predates the legendary Lindisfarne Gospels, has been added to the famed British Library's trove, the St. Cuthbert Gospel of John.

This small, red, leather-bound volume with its beautiful calligraphy is now on exhibit and is reputed to be the oldest intact book in all of Europe. The library purchased the volume from the British Jesuits for the equivalent of $14 million.

The origins of these two English national treasures lead one far from the bustle of London to Northumbria, hemmed in by Scotland to the north and the turbulent sea to the east. It was in the early seventh century that the Anglo-Saxon King Oswald invited Aidan, a monk from the island of Iona, to evangelize his people. 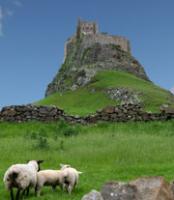 Aidan, later called the "Light of Northumbria" founded a primitive Christian community of monks on a small island in the North Sea. Their island, some three miles in length and a mile wide, is Lindisfarne, later called Holy Isle, a place of retreat, a haven in a brutal world. From this outpost on the edge of the civilized world these monks spread the Gospel among the ancestors of the English people.

A journey to Lindisfarne is neither easy nor simple. To get there today one can travel by rail some three and a half hours north of London, skirting the walled city of York, bypassing the cathedral city of Durham to the west, calling at the coal-rich city of Newcastle Upon Tyne, and disembarking finally at the seaside town of Berwick-upon-Tweed, three miles south of the Scottish border. From there it is another eight miles to the island by any form of transport one can find. This rural countryside is green and lush. Sheep are ubiquitous and castles dot the landscape, reminders of the warfare that was for centuries endemic to this borderland.

One approaches Lindisfarne with caution. Much like Mont Saint-Michel off the coast of Normandy, it is the sea that rules here. It is perilous to ignore its tides. Twice a day the fast-rising waters of the North Sea flood the mile and a half causeway that joins the island to the mainland. Tide times and the corresponding crossings are posted everywhere, and locals in Berwick and the 150 permanent residents of the island organize their lives around them.

One does not make a spontaneous visit to Lindisfarne lest one get trapped, as visitors occasionally do, by the rushing sea waters. In order to assist these foolhardy types, several boxes on stilts have been erected along the causeway, offering a place of safety while one waits out the tide. The difficulty in arriving at Lindisfarne has always been there. In the early 19th century Sir Walter Scott captured this reality in his poem named for the island:

For with the flow and ebb, its style
Varies from continent to isle;
Dry shod o'er sands, twice every day,
The pilgrims to the shrine find way;
Twice every day the waves efface
Of staves and sandelled feet the trace.

Lindisfarne attracts tourists, who come to walk its beaches, enjoy the prolific bird life and its population of seals, visit the local castle, feast on fresh catch from the sea or taste the Lindisfarne mead, a white wine made from fermented honey. But mixed with these tourists are pilgrims who come inspired by the history of this place, its contribution to English culture, and its encouragement of holy lives. For them Lindisfarne is Holy Isle.

Although many Benedictine monks inhabited this place over the centuries, two -- Aidan and Cuthbert -- are the most well-known. It was the ninth-century monk and historian Venerable Bede who chronicled their lives and recorded their deeds. Contemporary sculptures memorialize these brave and devout men. Aidan is depicted carrying the light of Christ. Cuthbert, who was both prior and bishop of Lindisfarne, is remembered as a contemplative who often fled Holy Isle to one of the distant Farne islands to pray. It was to honor God and St. Cuthbert that the beautifully illuminated Lindisfarne Gospels of Mathew, Mark, Luke and John were undertaken.

Although today Lindisfarne epitomizes a peaceful environment, much of its history was violent. Viking raids in both the eighth and ninth centuries resulted in looting and killing. The jewels and gold of the Lindisfarne Gospels were seductive booty for these invaders. In an effort to protect the body of their beloved Cuthbert, the monks transferred it inland to Durham, where in 1104 the coffin was reopened and the Gospel of John was found nestled with Cuthbert's body.

After the Viking invasions abated, the monks returned to Holy Isle in the 11th century and rebuilt their priory in Norman architectural style. Monastic life continued until 1535 when Henry VIII ordered the dissolution of the monasteries. Over the subsequent centuries the priory building fell into rack and ruin, its red sandstone walls and its roofs crumbled.

Today as in the past, the island offers an ebb and flow that regulate life, giving a connection to the larger world and then a retreat into solitude. Engagement and release are palpable on the island as tourists scurry back to the mainland when high tide approaches.

In the distant past, pilgrims came to Holy Isle to visit the burial site of Cuthbert, where healing was reputed to take place. Today one must journey to Durham Cathedral to find his tomb and that of the Venerable Bede, author of the early ecclesiastical history of the English people. But pilgrims still come to Holy Isle, some arriving by car, others walking at low tide across the mashes, guided not by the stone cairns as in the past, but by wooden poles that mark the route. Three religious communities -- the Roman Catholic church of St. Aidan, the Anglican church of St. Mary's, and the Cuthbert Center sponsored by the United Reformed church -- offer resources for pilgrims who stay for retreat.

For them it is the ruined priory with its walls and towers thrusting upward, its arches and windows framing the sky, its floor of green grass, the blustery wind and nearby churning sea that chastens and helps them imagine a community of early ardent Christians. In the ebb and flow, in the peace and turmoil of the long history of Christianity, Lindisfarne symbolizes for these pilgrims the persistence of the contemplative tradition and of heroic Christians who were given to God.

[Dana Greene is the author of biographies of Evelyn Underhill, Maisie Ward and Denise Levertov.]

Spirituality | In the footsteps of saints, contemplative tradition persists on Lindisfarne

His name is John

The church is immersed in the world