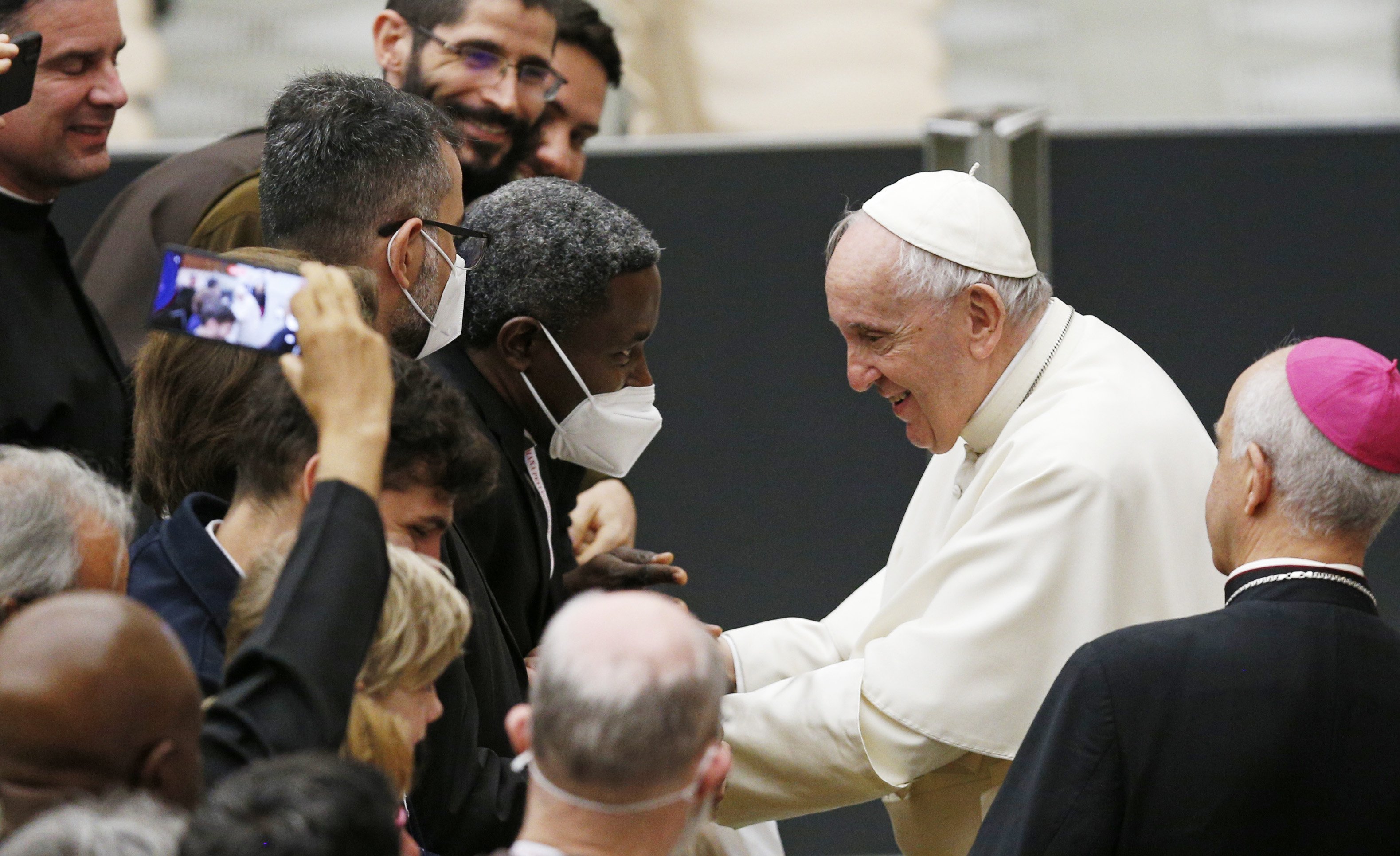 Pope Francis greets priests during an audience with Missionaries of Mercy priests at the Vatican April 25, 2022. (CNS photo/Paul Haring)

VATICAN CITY — Those who are called to be missionaries of mercy are entrusted with the important task of being the face and the voice of God's love to those in need, Pope Francis said.

"Let us never forget that God does not act in the daily lives of people through shocking acts, but in a silent, discreet, simple way, so as to manifest himself through people who become a sacrament of his presence. And you are a sacrament of God's presence," the pope told the priests during a meeting at the Vatican April 25.

The "missionaries of mercy" were priests chosen by the Vatican for the 2015-2016 Year of Mercy to preach about God's mercy and, especially, to encourage Catholics to rediscover the grace of the sacrament of reconciliation.

In a permission later extended to all priests, Pope Francis granted them the power to absolve penitents who regretted having an abortion or playing a role in someone's decision to have an abortion. He also authorized them to lift some penalties imposed by canon law.

Noting their increasing numbers, the pope said the missionaries of mercy "are a privileged instrument in the church" and, for this reason, were included his apostolic constitution reforming the Roman Curia, "Praedicate Evangelium" ("Preach the Gospel.")

"I wanted to place you there, in the Apostolic Constitution, because you are a privileged instrument in the church today, and you are not a movement that exists today and does not exist tomorrow. No, you are in the structure of the church. This is why I wanted to put you there," he said departing from his prepared remarks.

In his talk, the pope reflected on the biblical figure of Ruth, a young Moabite widow who "lives in a foreign country that considers her an intruder and not even worthy of solidarity."

However, her generosity toward her mother-in-law, Naomi, and her complete trust in God are an example of how "we can overcome the many forms of exclusion and marginalization that lurk in our behavior."

While God does not speak directly in the book, every one of Ruth's "gestures of kindness toward Naomi — who considers herself 'embittered by God' — becomes a tangible sign of the Lord's closeness and goodness," the pope said.

Pope Francis urged the missionaries of mercy to "keep all forms of judgment away from you and always put the will to understand the person in front of you first."

The pope also said that if the priests have specific requirements in order to forgive, then perhaps they "are not fit to be a missionary of mercy."