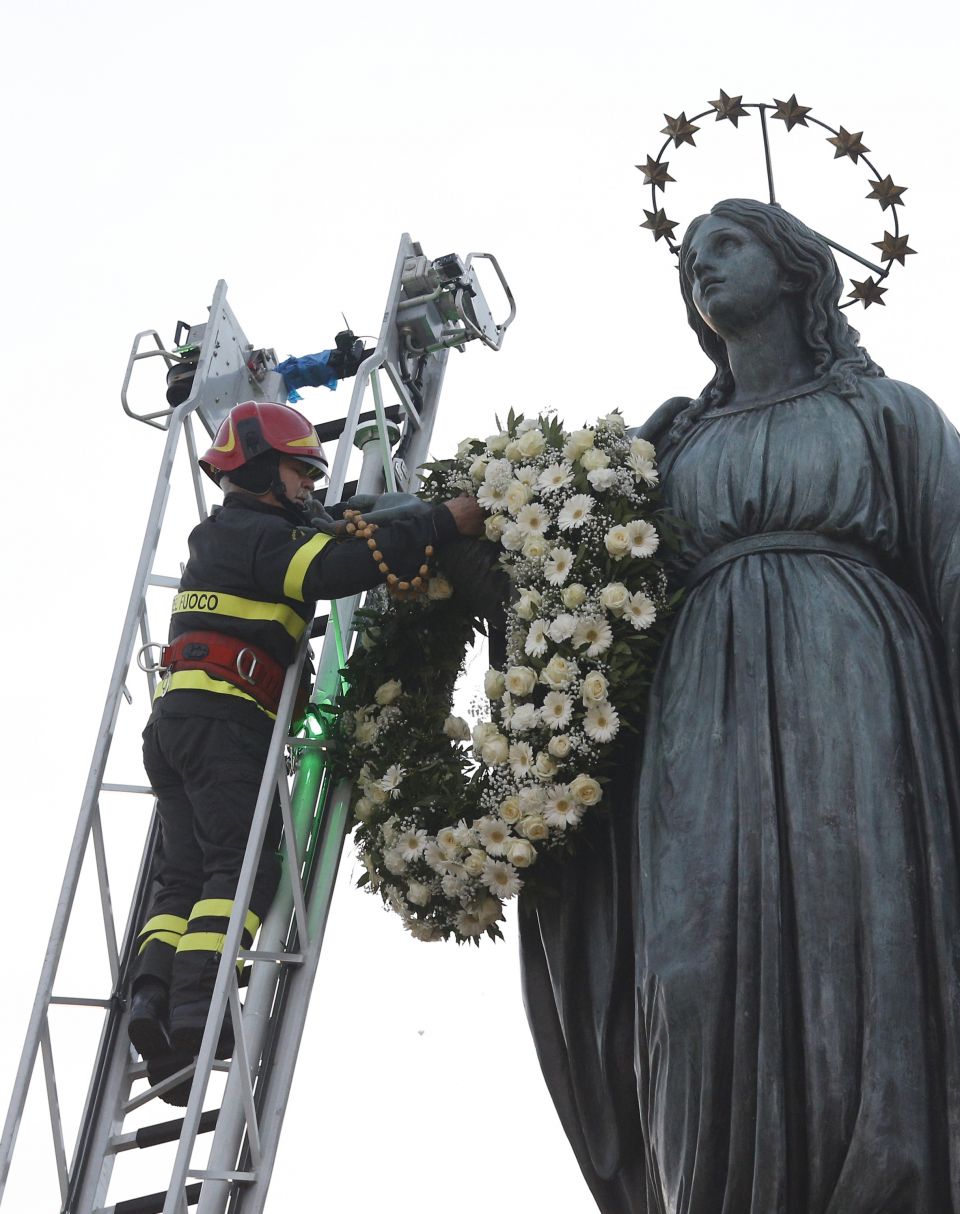 A firefighter places a wreath of flowers on a statue of Mary overlooking the Spanish Steps in Rome Dec. 8, the feast of the Immaculate Conception. Pope Francis was to honor Mary later in the day by attending a service at the statue. (CNS/Paul Haring)

Rome — Standing at the foot of a Marian statue, Pope Francis prayed Mary would help Christians develop the "antibodies" needed to fight the modern diseases of indifference, hypocrisy and fear of foreigners.

Celebrating the Dec. 8 feast of the Immaculate Conception, the pope recited the Angelus prayer at noon with visitors in St. Peter's Square, visited the Rome Basilica of St. Mary Major, laid a basket of white roses at the foot of the Marian statue near the Spanish Steps, then visited the Church of St. Andrew where, in 1842, Mary appeared to Alphonse Ratisbonne, a young Jewish man. He converted to Catholicism and founded the Congregation of Our Lady of Sion.

In his prayer near the Spanish Steps in the heart of Rome, Francis thanked Mary for watching over him and over the people of Rome, especially "the sick, the aged, all the poor, the many people who have immigrated here from lands of war and hunger."

He prayed that Mary would help people "develop antibodies against some of the viruses of our times: the indifference that says, 'It's not my problem'; civic rudeness which ignores the common good; the fear of what is different and of the foreigner."

"The hypocrisy of accusing others while doing the same things; being resigned to environmental and ethical degradation" and "the exploitation of men and women" were other ills the pope listed.

Francis noted that 175 years ago when Mary appeared to Ratisbonne in the Rome church, "she showed him a mother full of grace and mercy."

He prayed that Christians, "especially in moments of trial and temptation," would, like Ratisbonne, see Mary's open hands pouring out Jesus' grace on the world and giving people the ability "to shed every trace of proud arrogance to see ourselves as we are: small and poor sinners, but always your children."

In his Angelus address earlier in the day, the pope said the feast of the Immaculate Conception can be summarized by the angle Gabriel's greeting to Mary as "full of grace."

The doctrine of the Immaculate Conception teaches that Mary was conceived and born without original sin. By calling her "full of grace," the angel meant that she "was full of the presence of God," leaving no room in her life for sin, the pope said.

"She is the only 'always green oasis' of humanity, the only uncontaminated one, created immaculate so that she could welcome fully, with her 'yes,' God who was coming into the world," Francis said.

Mary, he said, came from a small town off the beaten track. "She was not famous. Even when the angel visited her, no one knew. There weren't any reporters there that day."

But she spent time reading the Scriptures and praying. "The word of God was her secret; it was close to her heart, and then it became flesh in her womb."

Catholic Church should focus on getting 'nones' back, Bishop Barron says