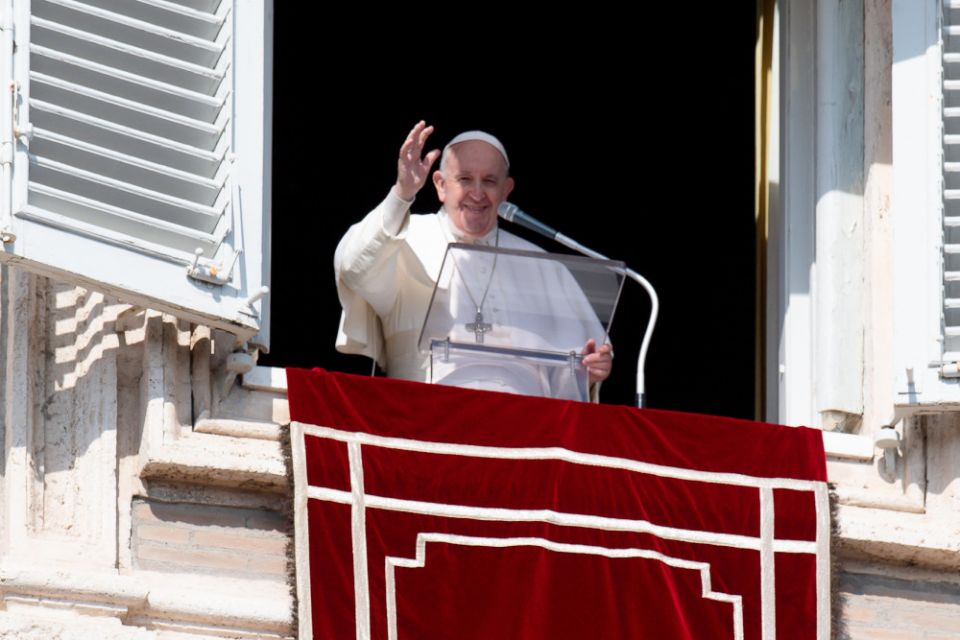 Pope Francis greets the crowd as he leads the Angelus from the window of his studio overlooking St. Peter's Square at the Vatican Feb. 21, 2021. Francis said that faith, prayer and penance are the weapons Christians are given to overcome temptations from the devil. (CNS/Vatican Media)

Vatican City — Christians must never engage in dialogue with the devil, but instead must fight against temptations with the same spiritual weapons Jesus used in the desert, Pope Francis said.

The Gospel account of Jesus' temptation in the desert, read each year at the beginning of Lent, is a reminder that following the Lord's footsteps "is a battle against the spirit of evil," the pope said Feb. 21 during his Sunday Angelus address.

"We must be aware of the presence of this astute enemy, who seeks our eternal condemnation, our failure, and prepare to defend ourselves against him and to combat him," he said. "The grace of God assures us — with faith, prayer and penance — of our victory over the enemy."

The Gospel says Jesus spent 40 days and 40 nights in the desert, which is an important "natural and symbolic environment" where God "speaks to the heart of the human person," the pope said.

However, he said, it is also a "place of trial and temptation" where the devil takes advantage of one's "human frailty and needs" and offers an alternative to God's voice "that makes you see another road, a road of deception."

Although Jesus ultimately overcame the devil's temptations, Francis said his true victory came after his crucifixion and death.

"In reality, death was the last 'desert' to cross in order to finally defeat Satan and free us all from his power. And in this way Jesus won in the desert of death, so as to win in the resurrection," the pope said.

Nevertheless, while faith, prayer and penance are needed to overcome temptation, the pope said it was also important for Christians to imitate Jesus who never entered "into dialogue with the devil; never!"

While it may seem that there is a dialogue in the Gospel, he added, Jesus "does not respond with his words," but rather with the word of God.

Francis encouraged Christians to "not be afraid of the desert" but instead, to seek moments of more prayer and silence.

"Do not be afraid. We are called to walk in God's footsteps, renewing our baptismal promises: renouncing Satan, and all his works and all his empty promises," the pope said. "The enemy is crouching there; beware. But never dialogue with him."

When my friend gave up politics for Lent