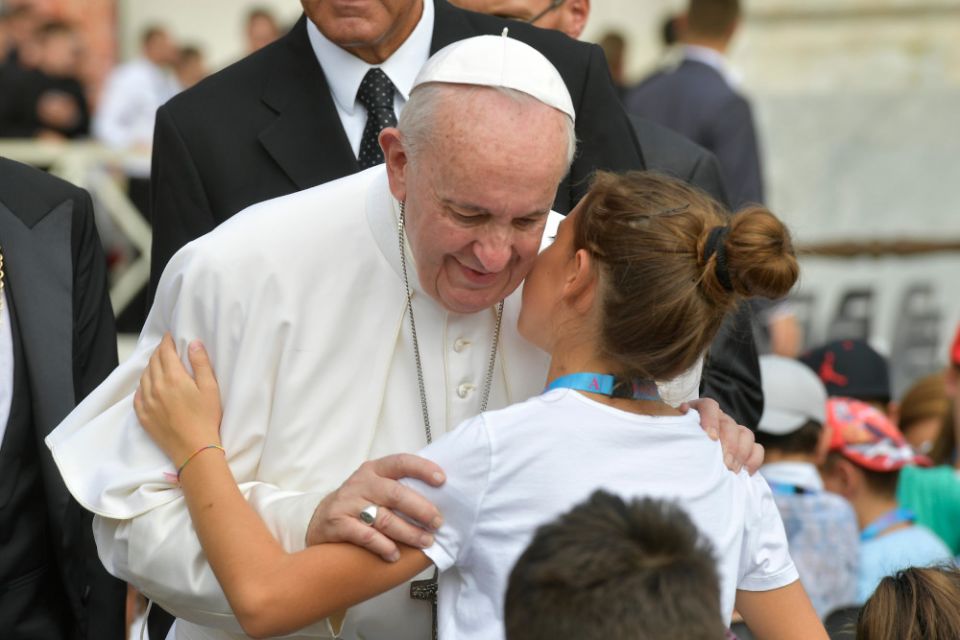 Pope Francis greets a young woman as he arrives for his general audience in St. Peter's Square at the Vatican Aug. 28, 2019. (CNS/Vatican Media)

Vatican City — While listening to and obeying God's word brings healing and comfort to those in need, it also can attract disdain and even hatred from others, Pope Francis said.

Christians are called to proclaim the love of God through their care for the sick and the needy, like St. Peter and the other disciples who went to various cities bringing spiritual and physical healing to many, the pope said during his weekly general audience in St. Peter's Square Aug. 28.

While Peter's healing of the sick also "aroused the hatred of the Sadducees," the pope said, his response to them to "obey God instead of men" is the "key to Christian life."

"Let us also ask the Holy Spirit for the strength to not be frightened in the face of those who command us to be silent, who slander us and even threaten our lives," he said. "Let us ask him to strengthen us inwardly to be certain of the loving and comforting presence of the Lord at our side."

The pope continued his series of talks on the Acts of the Apostles and reflected on St. Peter's role in leading the early church's mission of proclaiming Christ's love and of healing the sick and the suffering.

Today, like in St. Peter's day, he said, "the sick are the privileged recipients of the joyous proclamation of the kingdom, they are brothers and sisters in whom Christ is present in a special way so that they may be sought out and found by all of us."

"The sick are the privileged ones for the church, for the priestly heart, for all the faithful. They are not to be discarded; on the contrary, they are to be cured, to be cared for: they are the object of Christian concern," the pope said.

Despite their good works, Christ's early followers were subject to persecution by those who saw the miracles performed "not by magic but in the name of Jesus" and did not want to accept them.

"Their hearts were so hardened that they did not want to believe what they saw," the pope explained.

Nevertheless, Francis said, Peter's response to obey God is a reminder for Christians today to listen to God "without reservation, without delay, without calculation" so that they may be united with him and with their neighbor, especially the poor and the sick.

"In the wounds of the sick, in the sicknesses that are impediments to moving forward in life, there is always the presence of Jesus," he said. "There is Jesus who calls each of us to look after them, to support them, to heal them."