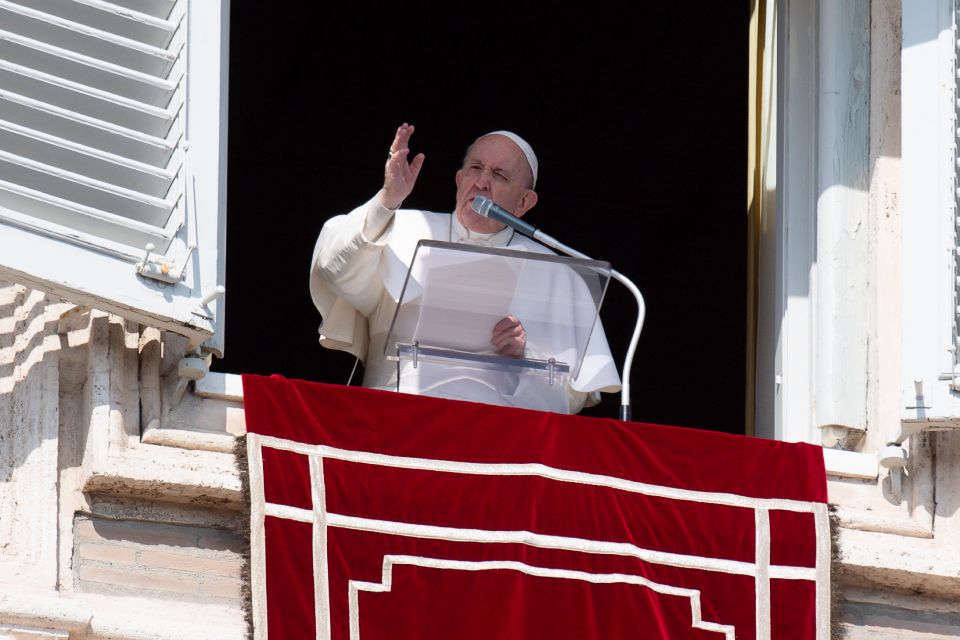 Pope Francis leads the Angelus from the window of his studio overlooking St. Peter's Square at the Vatican Feb. 21, 2021. (CNS photo/Vatican Media)

VATICAN CITY — Temptation's seductive proposals of happiness and freedom can lead one to being enslaved by the desire to possess material things and other people, Pope Francis said.

Christians are called to respond to temptation with the "word of God, which says not to take advantage, not to use God, others and things for oneself, not to take advantage of one's position to obtain privileges," the pope said March 6 during his Sunday Angelus address.

True happiness and true freedom, he said, "are not found in possessing, but in sharing; not in taking advantage of others, but in loving them; not in the obsession of power, but in the joy of service."

Before praying the Angelus prayer, the pope reflected on the Sunday Gospel reading which recounted the temptations Jesus faced in the desert.

The pope noted that the devil tempts Jesus with the words, "If you are the Son of God," and thus, tempts him to use his position "first to satisfy the material needs he feels — hunger — then to increase his power, and finally, to have a prodigious sign from God."

"How often this happens to us," he said. "It is a seductive proposal, but it leads you to the enslavement of the heart."

Although Christians must not be afraid of temptations, he continued, they must remain vigilant, especially when such seductive proposals "present themselves under an apparent form of good."

The devil "often arrives with sweet eyes, with an angelic face," the pope said. "He even knows how to disguise himself with sacred, apparently religious, motives!"

Pope Francis encouraged Christians to confront temptations just as Jesus — never entering "into dialogue with the devil" because "he is more cunning than we are."

The Lenten season, he added, is a "time of the desert for us," a time when Christians are called to "stop and look at what is stirring in our hearts, our inner truth, that which we know cannot be justified."

"Let us find inner clarity, placing ourselves before the word of God in prayer, so that a positive fight against the evil that enslaves us, a fight for freedom, may take place within us," the pope said.

Year in review: For pope, it was year to come to terms with abuse crisis