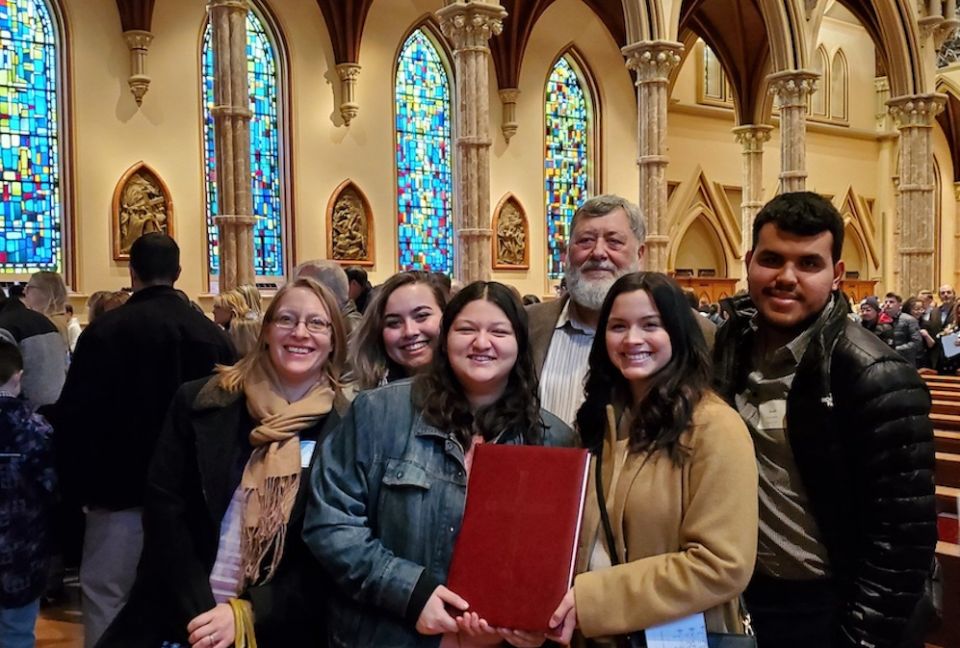 On a beige altar striped with beams of sunlight, Fr. Kyle Digmann presses oil onto the forehead of a young woman. She looks like she's in her early 30s. She's donning a brown robe with a white robe outside of it, and her hair is dripping wet.

There's scant applause. This baptism is unlike others: the priest, catechumen, catechumen's fiancé, godparent, music minister, RCIA coordinator, one altar person and person holding a camera are the only people in the church. Instead of seating members of the congregation, the pews instead feature printed photos of parishioners. This is baptism in the era of COVID-19: a nearly empty church, a solitary camera hooked up to a computer filming the Mass, an eerie echo. (RCIA is the "Rite of Christian Initiation of Adults," liturgical book of rituals and norms guiding people who wish to become Christians in the Catholic Church.)

Yet, for Digmann, pastor of St. Thomas Aquinas Church and Catholic Student Center in Ames, Iowa, this unusual way of receiving a sacrament bears a unique beauty. On March 17, Iowa Gov. Kim Reynolds prohibited gatherings of more than 10 people. As April neared, it became clear to Digmann that the ban wouldn't be lifted in time for the Easter Vigil. As with parishes across the country, the eight catechumens at St. Thomas Aquinas who were to be baptized at the Easter Vigil wouldn't be able to enter the church as they had planned.

Digmann was "heartbroken," but he immediately spurred into action. He contacted Brenda Neppel, coordinator of the St. Thomas Aquinas RCIA program, and the two started "thinking about possibilities," he told NCR.

"A lot of our catechumens and candidates were persistent about when they were going to receive the sacraments," Digmann said. "We were like, 'Well, we'll get creative and figure stuff out. They've been waiting this long to receive Jesus; let's get them the grace!' "

With the permission of the Archdiocese of Dubuque, Neppel and Digmann decided to offer the sacraments during the Easter season at the church. The only caveat: only one catechumen, their godparent, Digmann, Neppel, a cameraperson, and a music minister could be present per weekend. Social distancing had to be observed carefully. The godparent would serve as a lector in order to eliminate the need for an additional person. Everyone else would tune in via livestream on YouTube.

The first Sunday after Easter the first catechumen was baptized. Three more are booked for the next three Sundays, in addition to a few weddings in June.

According to Digmann, making the sacraments isn't about fanfare or hoopla, it's about God's grace alone.

"With the sacraments, we can get wrapped up in the externals: how many people are at my wedding, is all of my family here for the baptism," Digmann said. "Yet, seeing people's faith and desire during this time has reinvigorated my understanding of the beauty of the sacraments. It really has been stripped away of all of the other things and it's just distilled down to an encounter of this human being with Christ and his love and grace."

Sue Wolf, right, with her grandchildren and husband (Provided photo)

In pressing on, St. Thomas Aquinas is an outlier. Most RCIA programs across the country are on hold while churches remain closed.

At the Church of the Precious Blood in Monmouth Beach, New Jersey, baptism, confession, first Communion and confirmation are "indefinitely postponed," according to the parish website. The parish's eight-person RCIA cohort, which consists of candidates, catechumens and adults who are preparing to make their confirmation, is waiting for the church to safely reopen.

Ernie Stefanelli is one of the adults awaiting confirmation at Precious Blood; he has 14-year-old twins who were also expecting to be confirmed later this spring. Stefanelli doesn't mind missing his ceremony, but he's saddened by the prospect of his sons missing theirs.

"I really don't mind not having a ceremony or anything during the Easter season," Stefanelli said in an email interview. His RCIA peers have been meeting weekly on Sunday mornings via Zoom for continued formation and fellowship. Stefanelli finds these meetings, and the layman-Dominican Sister of Hope duo who run them, deeply nourishing.

"I don't need anything else," he added. "If at the end of this the church recognizes me as confirmed, that is great."

When it comes to his children, though, he feels differently, perhaps because confirmation concludes their eight-year religious education tenure.

"They have been working towards this for years and are going through this with all their friends," he wrote. "So, in their case, I think it would be a nice culmination of all their work together to be publicly recognized."

Like that of Church of the Precious Blood, many RCIA programs have continued to meet via Zoom for instruction, for fellowship or for both. And candidates and catechumens are willing to be patient about receiving their sacraments, up to a point.

Sue Wolf, a candidate at St. Peter Church in Danbury, Connecticut, was stunned when the church closed for Easter. As a former Presbyterian, she said that missing out on the Triduum was "just unbelievable."

She's since attended one RCIA Zoom meeting and weekly live-streamed Mass from St. Peter, but she's encountered periodic technical difficulties. When she has been able to tune into Mass successfully, she feels bad for the pastor who presides alone.

"He looked like a fish out of water with no one there," Wolf said.

Wolf would like to receive the sacraments on Pentecost Sunday, as the RCIA coordinators of the parish have tentatively projected. Wolf is both excited and nervous for her husband, children and grandchildren to be present for her first sacraments.

However, she's skeptical about the church reopening in May.

"If it goes on beyond May 30th, I'm cool with that," she said. "If it doesn't happen by the fall, I think I will be a little bit disturbed."

The uncertainty is widespread. Even some candidates and catechumens at St. Thomas Aquinas Church in Ames are in limbo.

Keegan Clark joined the RCIA program at St. Thomas Aquinas Church in March 2019 (the program accepts new members on a rolling basis throughout the academic year). This spring marks one year of his participation in the program, with still no sacraments. Clark admits that he was "pretty upset," but that sheltering in place has provided him with an opportunity for reflection.

"The fact that the Easter Vigil as I'd imagined it got taken away was confusing," he said. "How could something so beautiful be taken away from us like that? I've been spending a lot of time sitting and praying and asking God why this had to happen."

The Iowa State junior is now discerning what to do next. Clark is aware that he has the option to complete his sacraments with Digmann and a few others in a socially distanced setting, but he's leaning toward waiting until the church is fully reopened.

Clark sees entering the church not as a personal event, but as a chance for him to "go out and spread God's love and mercy and his word," including to his family who are not religious.

"I can do that by bringing my own family into the church firsthand to witness me receiving the sacraments for the first time," he said. "Maybe they'll have questions about exactly what baptism meant to me. I would love to have that conversation with them."

While candidates and catechumens shelter in place sans sacraments, the directors and coordinators of the RCIA programs maintain that coming into the church in the presence of family, a full congregation, the smell of incense and an open church will be worth the wait.

It's unfortunate, they agree, that the Easter Vigil is passed and can't be recreated. For now, though, churches are at the discretion of both state government and bishops about when and how to reopen.

"We're all taking direction together," said Marci Madary, 52, RCIA coordinator at St. Giles Catholic Parish in Oak Park, Illinois. "How will reopening look? We're not going to be able to snap our fingers and go back to being in the church pews together. How are we going to gradually ease into that?"

As Madary puts it, safety is essential, but receiving the sacraments for the first time should occur in community, and should be "as mystical and magical as possible."

Whereas Digmann finds magic in a quiet ceremony, many are eagerly awaiting just the opposite.

"My hope is that we'll be able to bring candidates and catechumens together safely after COVID-19 so that, together in community, we can all collectively share the joy of bringing them into the faith," said Al Messana, a deacon at the Parish of Annunciation-Our Lady of Fatima in Crestwood, New York.

"When Father says, 'Please join me in welcoming the newest members of our community,' that they can hear that roar and that clapping as people share that joy, that's truly my hope."

Second Sunday of Lent: Look beyond your logic