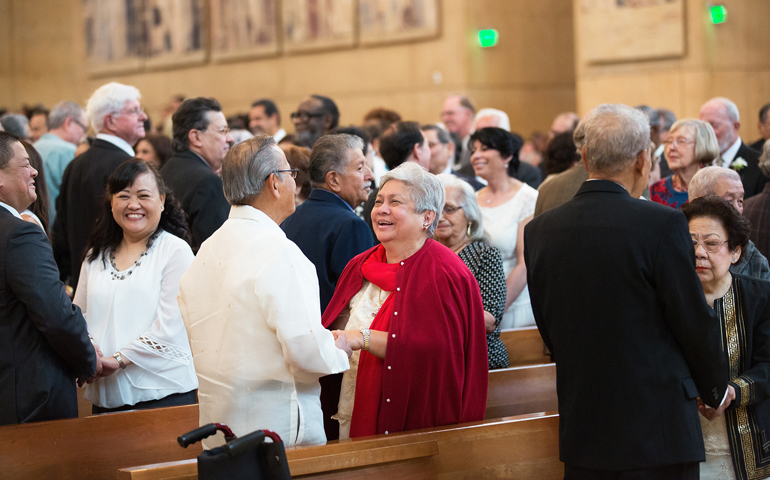 More than 100 couples renew their wedding vows Feb. 9, World Marriage Day, during Mass at the Cathedral of Our Lady of the Angels in Los Angeles. (CNS/Via Nueva/Victor Aleman)

Editor's note: The 50-page instrumentum laboris, or working document, that was released June 26 and will guide the discussion during the October Synod of Bishops on the family was dry and impersonal, lifeless almost, and that confounded us at NCR.

From personal experience and from listening to colleagues, readers and friends, we have experienced marriage and family life as life-giving and joyous. Marriage and family life is not without its challenges and struggles; it offers ample lessons in humility and forgiveness, but that, too, at the best of times can be nurturing. If the writers of the instrumentum laboris, which is now supposed to be being studied in dioceses throughout the world, had begun with the fundamental experience of people who have lived in marriages and raised families, we wondered, how different would it have been?

So we asked two NCR contributors to answer this: If the Synod of Bishops asked me about marriage, what would I say? On Monday, we ran Mike Leach's response. Today, Melissa Musick Nussbaum.

About the time my cousin discovered what all wives eventually learn, that Prince Charming is an amphibian, that is, half prince, half frog, she went to our grandmother for advice. "Ma-Maw," she said, "did you ever think about divorcing Da-Da?"

Ma-Maw said, "Oh, honey, no. I thought about killing him lots of times, but divorce? Never."

When I learned that St. Benedict, abbot and author of the Rule, had two (count 'em, two) monks try to poison him, I figured he was on to something about community life, including the communal life that is marriage.

Benedict grew up in a world in which monks were hermits. They sought God in silence and solitude. Part of Benedict's genius can be found in his insight that the ordinary act of living together -- in community, in stability and fidelity -- for one's whole life can lead to holiness. Just learning to sit at a table every day next to the person whose smacking and slurping drives you mad -- while refraining from mad behavior in return -- can lead to God. As well it might, because learning to live with another person is hard work. It means forgiving over and over again, long past what seems reasonable and just. It means throwing the assumptions of what constitutes "reasonable and just" out the window, in the same way parents give up wearing "dry clean only" linen while the kids are about and sweat through the summer in washable polyester.

That's why Benedict's Rule -- he called it a "little rule for beginners" -- is such a handy guide for married life. It's brief, less than 9,000 words, and plain. It's not philosophy or even theology; it's more of a field guide to life in the wilds of community.

Here's an example: Benedict advises the abbot to know each of his monks individually, and to consider each monk's needs, talents, shortcomings and strengths. This knowledge is essential for life together. I've learned that the night before an appearance in federal court is not the time to bring up with my lawyer husband that thing he said at the party last Saturday. Ill timing can turn a misstep into a tumble down three flights of stairs. He's learned that I can either sleep at night or watch the 10 o'clock news with him and worry all night -- his choice. It's hands-on learning, what Russell Hittinger calls "knowledge touched by the thing being known."

Benedict means to lay out a rightly ordered life. He seeks to find a balance between work and prayer, rest and activity, speech and silence. We live in a time when there is no night and, so, no rest. There is always music, piped in elevators and coming out of grocery store ceilings, and, so, never silence. We have constant access to email and Internet and phones, so there is never respite from work. Observe the couple sitting at a table in a restaurant, each head bent over a cellphone, thumbs tapping, eyes fixated on the glowing screen. There are messages coming in! But there are no messages going from person to person at the table.

But how do a husband and wife come to know one another as Benedict advises an abbott to know his monks? Benedict advises his monks to "listen to the precepts of your master with the ear of your heart." Listening with the ear of your heart is not taking notes; it is an attitude, an attitude of two who are in relationship. And it is the cultivation of that relationship -- with Christ and with one another -- that Benedict teaches.

I've been recommending the Rule of St. Benedict to couples planning to marry and those already married for years. It's important to take good counsel where it may be found. Married Christians can learn from other Christians who also live in community. "Let all guests who arrive be received as Christ," from Benedict's Rule, for example, is about the best child-rearing advice I ever received. (Notice he doesn't say you can't be worried or afraid or less than thrilled about the guest. You just have to do the work of receiving him or her as you would Christ. There's nothing about streamers or balloons.)

But if we who are married can learn from those who are celibate, does it not also follow that those who are celibate can learn from those who are married? Because who does the dishes and why don't you ever squeegee the shower glass and how are we going to use the tax refund and whose car gets replaced first are the same questions for communities, whether married or celibate. And (spoiler alert!) marriages aren't primarily spent in bed (at least after the first year or the first baby), so the fact that one group is having sex is an issue, but not the issue or the only issue of life lived together. Which is why I think it's important that any synod on the family include people who live in families.

I said that learning to live with another is hard work. It is. And the church is focused on the conditions that make an already hard work even harder. But the bishops also need to hear from the workers themselves. Because the work, difficult though it is, brings joy. That deserves some focus, too.

I remember after our fifth child was born. We were at the swimming pool and I was watching a woman with a baby about our son's age. The babies looked a lot alike. The mothers didn't. In between wishing she would fall in the deep end and drown, I was searching her trim physique for some signs of stretch marks or sagging skin. I figured my husband, married but not dead, was looking, too. So I said, "She looks pretty good, huh?"

And he said, "Oh, I don't know. She looks a little skinny to me. You know," and here he leered in the nicest way, "I like a little something I can get my hands into." I decided right then and there I'd marry him all over again.

Listening with the ear of his heart, indeed. It's something people who have shared their fears in the middle of the night learn. Waking with a pounding heart at 3 a.m., sure that someone else, a friend, is near. Sometimes I wake him. Sometimes I just listen to his snores and snuffles and take my comfort there. He knows where all the buttons are, sure, but he also knows when not to push them.

It's the same lifelong sharing that makes me think, whenever I hear a funny story, or an outrageous one, or whenever I learn something new, "I can't wait to tell Martin about this."

What would I like to hear from Rome? "We can't wait to hear about families from people who are in them."

[Melissa Musick Nussbaum lives in Colorado Springs, Colo., with her husband of 40 years. Her NCR columns are collected online at My Table Is Spread. More of her work can be found at thecatholiccatalogue.com.]

A version of this story appeared in the Aug 1-14, 2014 print issue under the headline: The joy and mercy of marriage.