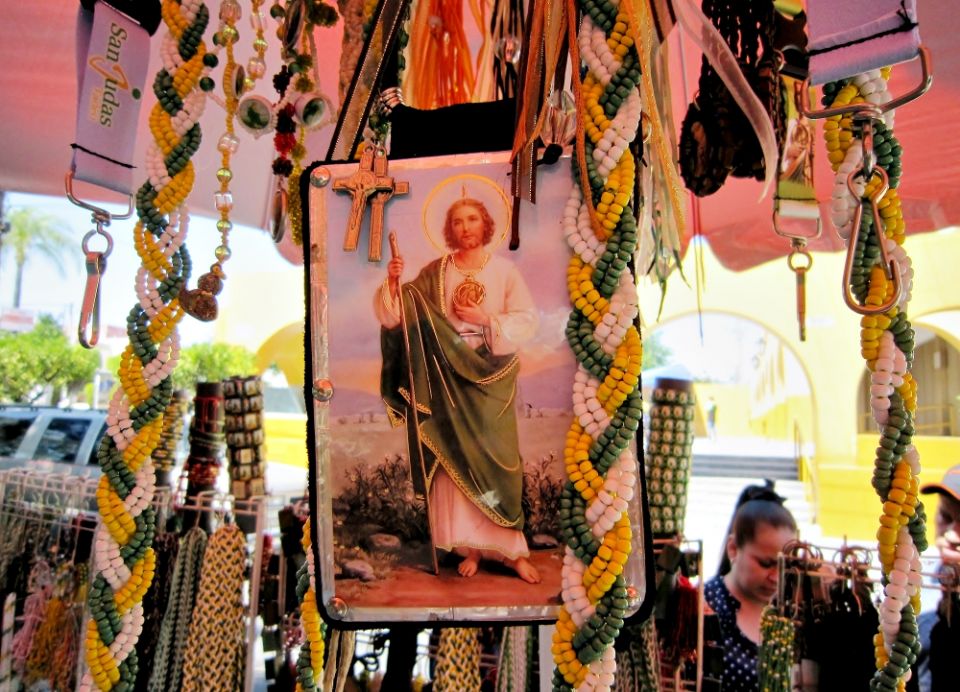 Merchants bring St. Jude Thaddeus imagery from Mexico City to sell outside of the iconic church named for him in Guadalajara, Mexico. (Stephen Woodman)

GUADALAJARA, Mexico — A few days after a group of armed men kidnapped her 27-year-old son, María set up a shrine to St. Jude Thaddeus at her home in Guadalajara, western Mexico.

"I keep photos, candles and holy water at the altar," María said. "That's where I plead to God and let my emotions out."

Faced with stiff competition from the cult of Santa Muerte — a heretical saint who personifies death — Mexico's Catholic Church has seized on the popularity of St. Jude Thaddeus, the patron saint of lost causes and desperate situations.

With the purported relics of the apostle on public display at the local St. Jude Thaddeus Parish, María will join thousands of devotees eager to petition the saint during his feast day Mass on Oct. 28.

A few miles from the church is a small temple devoted to Santa Muerte. Throughout the week, worshipers stop by with prayers and offerings, and once a month a priest conducts a service based on the Catholic Mass. 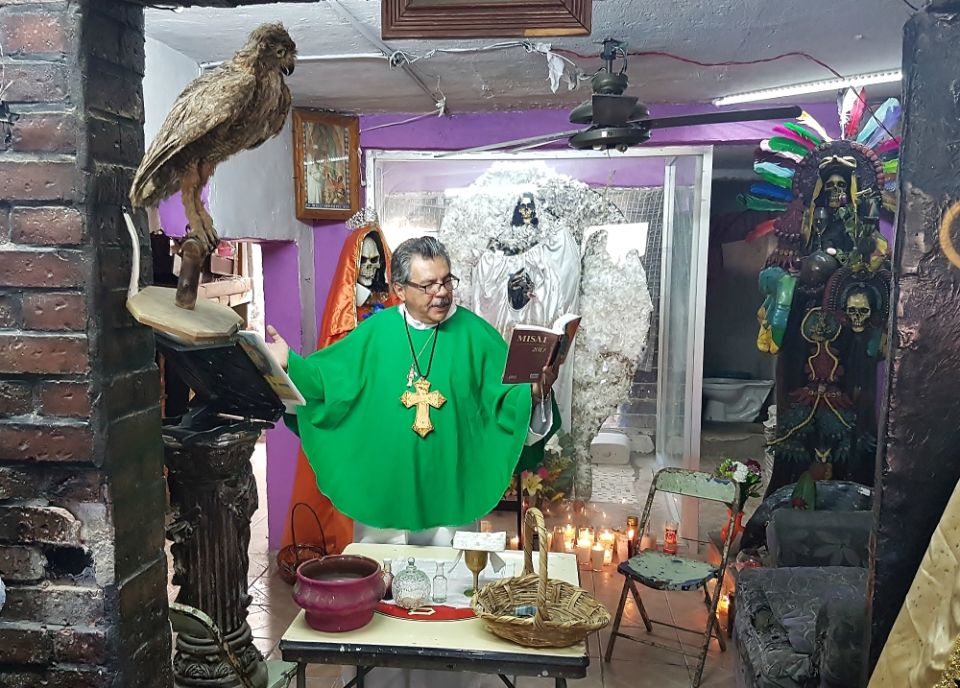 Founded in 2006 by Rodrigo Lemus, the temple has been run by his brother, Miguel Angel Lemus, since Rodrigo vanished without trace seven years ago, becoming one of the more than 32,000 people across Mexico who have disappeared in suspicious circumstances since 2006.

According to Lemus, most worshipers who visit the temple consider themselves Catholic but feel alienated from the church hierarchy. Unlike a Catholic church, the Santa Muerte temple offers sacraments without restrictions. Same-sex couples or divorced partners can marry and Communion is offered to those who have not confessed.

"The temple is for everybody," he said. "Both rich and poor. ... Everybody is welcome." 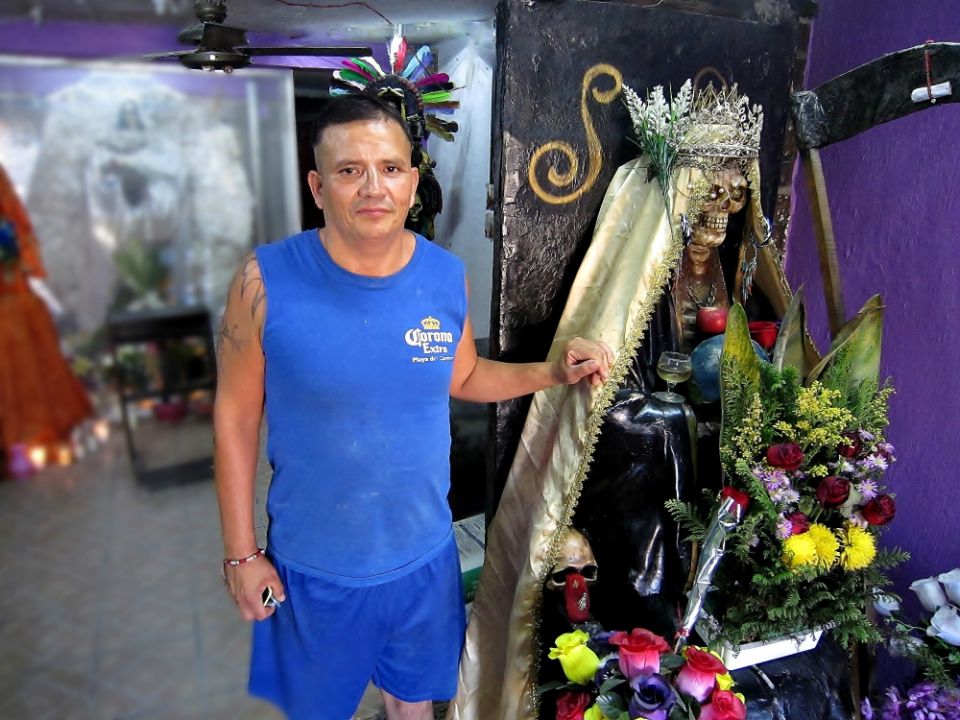 The Vatican takes a far less rosy view of the cult, which it sees as a deeply threatening presence in the country with the world's second-largest Catholic population. In 2013, a senior church official said worshiping Santa Muerte was a "degeneration of religion." Three Catholic bishops in the United States also denounced the folk saint in February.

Yet despite the church's stance, Santa Muerte is currently the fastest-growing new religious movement in the Americas, according to Andrew Chesnut, chair in Catholic studies at Virginia Commonwealth University and the author of Devoted to Death: Santa Muerte, the Skeleton Saint.

Related: How a folk saint of death took off among transgender women in Mexico

According to Chesnut, Mexico City's St. Hippolytus Church responded to the explosive growth of the monthly Santa Muerte rosary service in the capital by organizing a special Mass in honor of St. Jude Thaddeus on the 28th of each month. These monthly celebrations drew impressive crowds and quickly expanded to other parts of the country.

"St. Jude Thaddeus is the only Catholic saint in the world who now basically has a monthly feast day," Chesnut said.

Typically depicted in a green cloak with a flame above his head and a wooden club in his hand, St. Jude Thaddeus was one of Jesus Christ's 12 apostles.

Much like Santa Muerte, the canonized saint's popularity is tied to his reputation as a powerful miracle worker. For centuries, believers were wary of invoking him because of the similarity between his name and that of Judas Iscariot, Christ's betrayer. Yet according to tradition, the forgotten saint became a powerful intermediary, eager to assist those in need.

"Word has spread that St. Jude can help you with your most pressing problems," said Guadalajara-based priest Fr. Juan Carlos López. "Because of that, the devotion has grown." 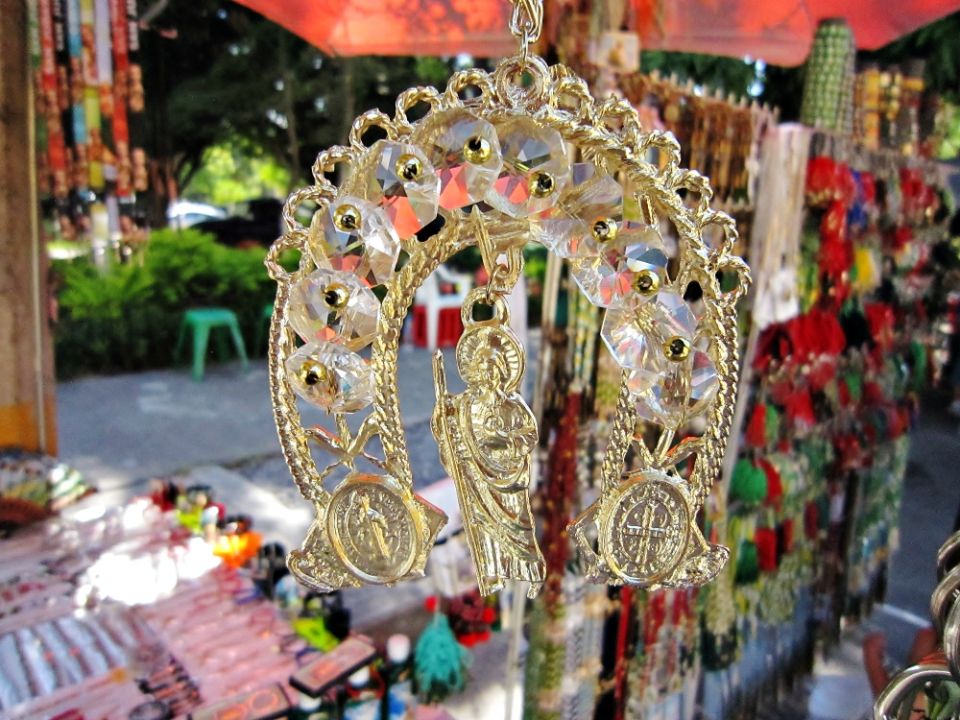 Necklaces and other jewelry featuring the image of St. Jude Thaddeus are sold outside of the Guadalajara parish that bears his name. (Stephen Woodman)

Yet some church officials have expressed concern about the saint's popularity with criminals.

"There is a dark, negative side to all of this," said Fr. José de Jesus Aguilar, director of the radio and television service for the Mexico City Archdiocese. "St. Jude Thaddeus has also become the patron of thieves, drug traffickers and those who are doing evil. This is a contradiction. Saints cannot support those who are doing wrong."

One belief that has become popular with criminal devotees is that St. Jude Thaddeus is open to shadier requests when he is depicted with a club in his left hand rather than in the right. According to Aguilar, the belief stems from copies of the image that were pirated from Italian prints, changing the hand that held the club. This left-handed St. Jude Thaddeus became extremely popular, and inverted images of the saint are still sold in many markets in Mexico.

Some experts believe that the popularity of both St. Jude Thaddeus and Santa Muerte suggests a more radical shift from a religion dominated by priests and institutions, to one that finds expression in the private altars, statues and even tattoos of devotees.

"Those who are not ready to step outside the church but are on its margins venerate St. Jude Thaddeus," said Blanca Estela Bravo, an anthropologist who has written about new religious devotions in Guadalajara. 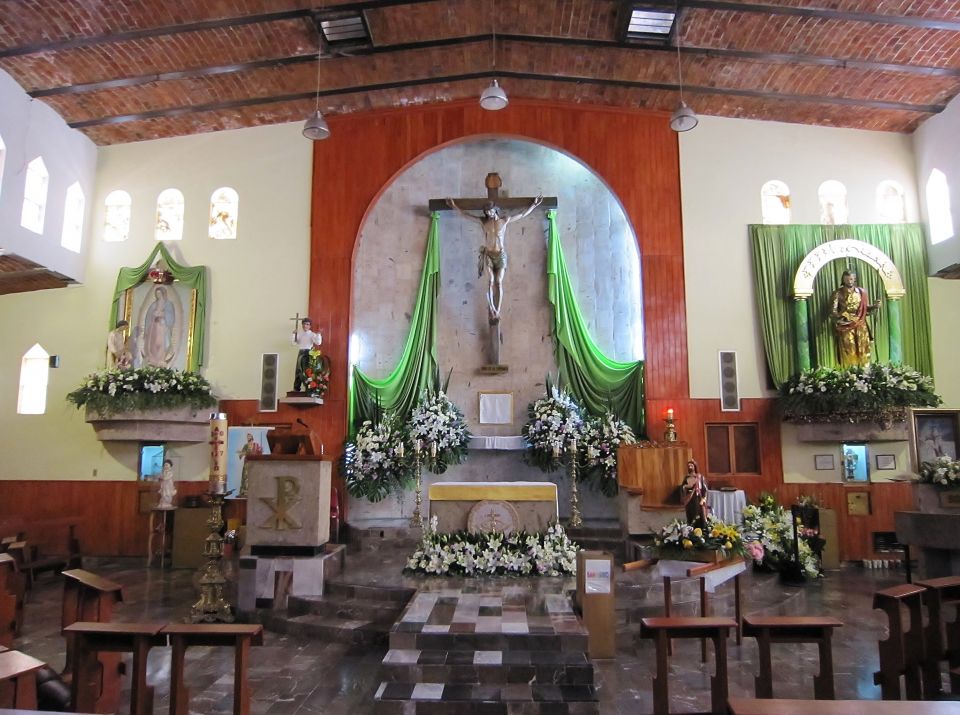 The interior of Guadalajara's St. Jude Thaddeus Parish, which will fill with devotees on its patron's Oct. 28 feast day (Stephen Woodman)

Estela Bravo points out that while the Catholic Church sees Santa Muerte as a fundamental threat, few devotees of the death saint feel any such conflict.

"All of the Santa Muerte followers that I have interviewed are Catholic," she said. "They need something extra, but they still feel they are Catholic."

Analysts have also identified a link between the growth of these devotions and the violence of the ongoing Mexican drug war. More than 200,000 killings have been recorded in the country since 2006.

St. Jude is a regular fixture in the altars honoring Mexico's many disappeared, while Santa Muerte has taken root in working-class communities that have been ravaged by violent crime.

"Both saints reflect the uncertainty of this world," said Estela Bravo. "Both are invoked by the police, assassins, drug dealers and other people whose lives are at risk. People turn to them for protection ... so they can avoid a violent death." 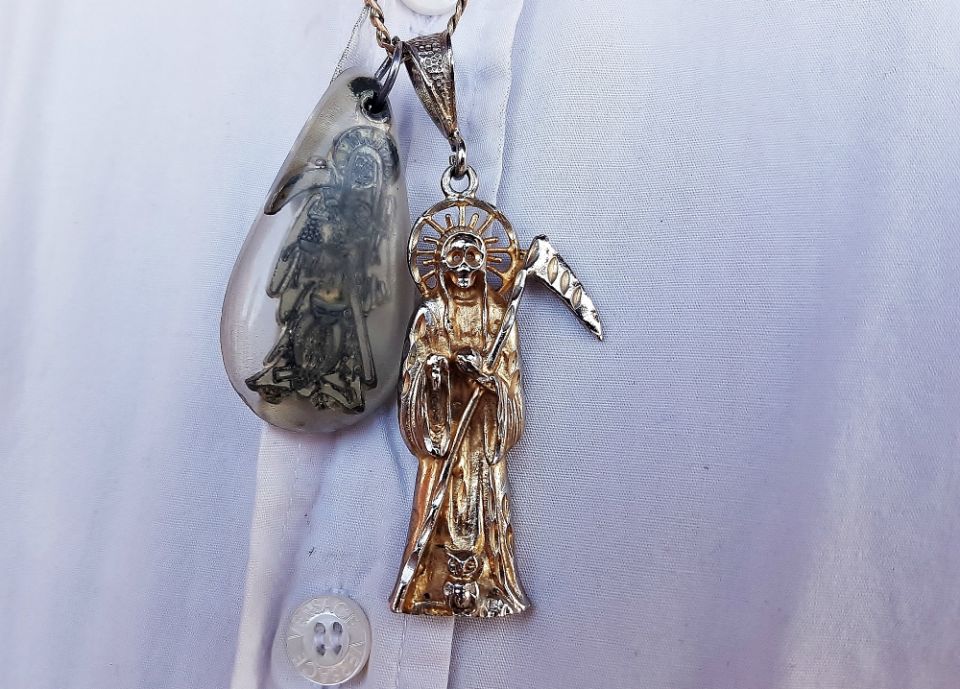 [Stephen Woodman is a British freelance journalist based in Guadalajara, Mexico. He mostly writes about human rights and religion. You can follow him on Twitter at @Stephentwoodman.]