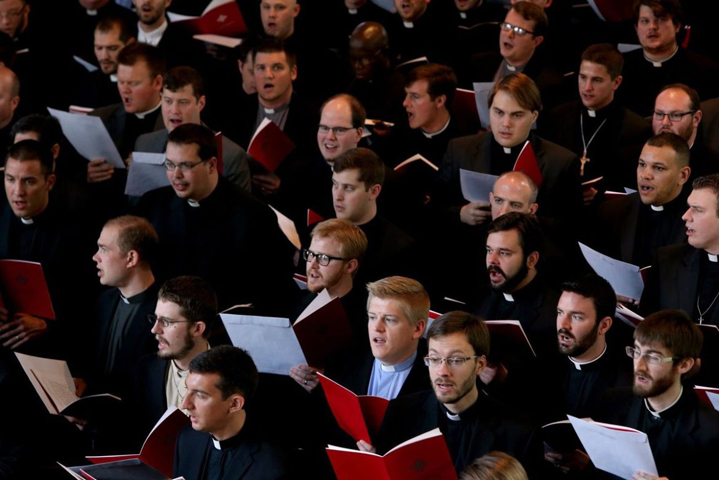 Candidates for the Office of the Holy Ministry sing during a church service that is part of graduation ceremonies at Concordia Seminary on May 20, 2016. (David Carson/St. Louis Post-Dispatch)

Half a millennium since a Catholic priest named Martin Luther railed against Rome for being out of step with Jesus, sparking the Protestant Reformation, discord continues within the ranks of his devout followers over the role of Lutheran clergy and the laity.

"We are fighting a 500-year battle," the Rev. Heath Curtis said last week at a conference at St. Paul Lutheran Church in Hamel, a tiny farming town in southern Illinois.

The words "Holy, Holy, Holy" were painted high on one side of the wall, the German translation on the other: "Heilig, Heilig, Heilig."

This is the heart of the Lutheran Church-Missouri Synod, a conservative-leaning network of 6,000 churches whose roots are in northern Europe. Though the headquarters is in Kirkwood, more than 2 million members are spread across the country.

Like other mainline churches, the synod struggles to find new blood in the U.S. -- both in the pews and at the pulpit. The decline helped motivate some men often in remote and inner-city areas, to bypass four years of seminary training to serve a congregation in need.

Lutheranism has always been built on a tension between ordained clergy and what is called the priesthood of the believer, or the laity, and over who can do what. While the pool of men -- the church ordains only men -- answering the call to enter seminary and serve as pastors has shrunk in recent decades, some want to enforce higher standards on ministers who aren't ordained and strip away the so-called "Licensed Lay Deacon" credentials.

Since the synod made efforts in 1989 to officially allow trained deacons to serve as pastors in exceptional situations, the grass-roots practice of elevating a parishioner from within a congregation to ministry has exploded to include more than 500 people.

Gottesdienst, a journal on Lutheran worship, put on the recent conference in Hamel for traditionalists to plan how to curtail the practice, which some presenters attacked as a threat.

"I for one am not surprised by the entire lay ministry fiasco we have had to endure for nearly 30 years," said the Rev. Burnell Eckardt, reading from a paper he prepared. "Confusion, division, and unrealistic expectations have ensued."

That kind of fiery rhetoric is expected at the synod's July convention in Milwaukee.

There, the licensed lay deacon issue is expected to be a contested topic called to the floor for debate with the synod's current top leader joining the call for reform.

In a speech at the recent conference, the Rev. Matthew Harrison, president of the synod, said the Lutheran church has "gone far beyond" the "controversial action" taken in 1989 at a convention in Wichita, Kan., that created the deacon program. He put his stamp of approval on a special task force that essentially seeks to strike and rebuild.

Among the recommendations, licensed deacons who preach and administer communion would apply to be examined by the synod and, in some cases, receive more theological training before being approved for ordination. Their new status would be "specific ministry pastor."

The task force says districts also should explore other means to address pastoral challenges, such as "multipoint parishes, technological aids, and greater use of inactive pastors."

"We believe that through the mild suggestions of the task force we shouldn't have to close a single congregation," Harrison said. "In fact, we want more people trained to assist their pastors in the appropriate way."

As president of the synod the past two terms, Harrison has publicly held a hard line against homosexuality and interfaith worship. He's called on intensive theological training for clergy and expansion of international missions.

Writing recently about the "brutal facts" of the synod's 40-year decline in membership, Harrison said 95 percent of the members are of European descent and they are not having nearly as many children.

Realizing the highest growth potential is abroad, the synod is in fellowship with more than 30 church bodies worldwide, particularly in Latin American and Africa. Harrison says Lutheranism "sputters and fails" anywhere clergy don't have extensive seminary training. For that reason, he said, church leaders in Ethiopia and other areas have asked the Missouri synod for theological support.

"They know they need pastors against glory theology, against prosperity theology and against all kinds of charismatic nonsense going on in Africa," Harrison said at the conference. "We cannot shirk seminary education. It is our crown jewel because it teaches our men what they need to know and give for the gospel."

In the June 11-14 presidential election, Harrison faces the Rev. Dale Meyer, president of Concordia Seminary in Clayton, and the Rev. David Maier, leader of one of the synod's largest 35 districts, Michigan.

"This issue is indeed troubling the church," Meyer said in a Q&A released by the synod, referring to the Licensed Lay Deacon program.

But Maier, of Michigan, said deacons are "highly trained, educated and certified annually… I am thankful for their hard work, labor of love, allowing themselves to be used by God in surprising ways."

Lay deacon leaders are relatively uncommon in the Midwest. Farther out, synod districts like the Irvine, Calif.-based Pacific Southwest District depend heavily on licensed deacons, with 87 among the ranks.

The Rev. Larry Stoterau, president of the district, said he is supportive of the program and has "grave reservations" about suggested changes.

Under the task force recommendations, he said, those licensed deacons who don't go on to be ordained will "lose recognition that they are doing meaningful ministry."

He said licensed deacons often serve in urban churches in Southern California that can't afford a full-time pastor, others at larger parishes in support of full-time pastors.

The Rev. John Juedes said he's trained 35 deacons over the past 17 years in the San Bernardino, Calif., area and described it as a strong movement that is surprising people.

"God is behind this," he said. "I have been able to see the deacons learn to minister and see their ministries multiply and bear good fruit. There is a controversy between those who see the benefit and those who don't have much experience with it."

One of his students was Willie Martin, 58, of Grace Lutheran Church in Banning, Calif. His regular job is in auto repair.

A former elder, Martin said he "felt it as God was leading" him to pursue more training. Licensed since 2004, he said he's helped fill in as a preacher.

Citing Martin Luther's standards, he said, God has given him the ability to preach in a manner that all people can understand.

He said another licensed deacon he knows has long hair and tattoos. He doesn't preach but fits in well with the biker crowd. He said their licenses are good for a year.

"If we mess up," said Martin, "we don't get our license renewed."

Martin went down a different track than the class of 80 students who gathered Friday morning at Concordia Seminary in Clayton. They were graduating from a four-year program and about to become fully ordained pastors at churches throughout the country.

The Rev. James Voelz started his sermon telling them to expect "tough days ahead." As the pastor put it, they were going out to serve in a culture where abortion is accepted and homosexuality is a condition that is glorified and given legal status.

"Within an increasingly hostile context, what are you to do?" he said, telling them to immerse themselves in scripture and Martin Luther's writings.

One of the new graduates was Matt Gulseth, 31, who was headed to be an associate pastor in Clovis, Calif. He said everything he'd learned in seminary was in service of the Gospel.

He was aware of the licensed lay deacon issue on the table for convention and described it as a tough one.

"We are always trying to learn from our mistakes and blessings," Gulseth said. "We are always refining, spending time figuring out how to do ministry in a new context."