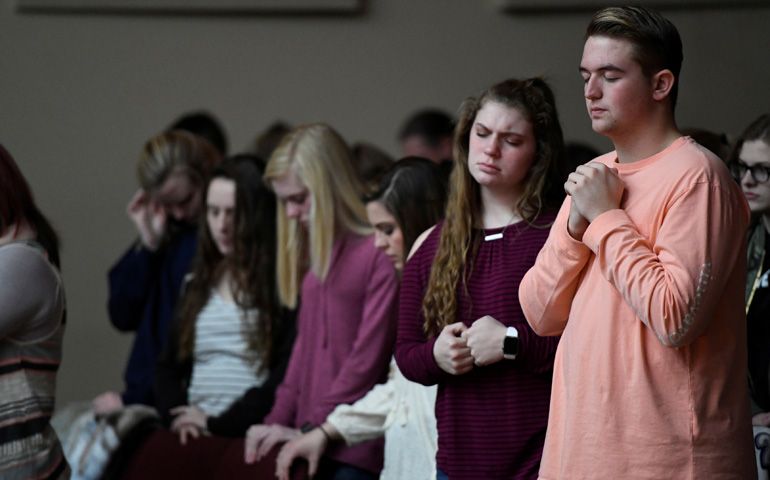 Students attend a prayer vigil Jan. 23 at a church in Marion, Kentucky, after a 15-year-old boy opened fire with a handgun that day at Marshall County High School. (CNS/Harrison McClary, Reuters)

Commentators on the Scriptures tell us that each of the Gospel writers kind of gives an idea of how the Gospel will develop by the very first teaching or miracle that Jesus performs. In this case today in Mark's Gospel, it's an exorcism, the first public act of Jesus and something that astonished the people who had gathered in that synagogue to see Jesus have such power over evil; it amazed them. We have to understand that the Scripture writers speak of evil by personifying it, thinking of evil as demons and that evil has to be overcome, destroyed, driven away.

So for Mark and his Gospel, we'll focus on this. The ministry of Jesus is, first of all, a ministry of trying to rid our world of evil, to banish evil. We're supposed to be a human family where every person is respected and loved and cherished. We're supposed to be a human family that slowly builds up the reign of God by following Jesus. You may recall just a couple weeks ago, the Gospel was about the calling of the first disciples, and we reflected on how each of us is called to be that follower of Jesus.

As we reflect on what that means to be a disciple or follower of Jesus today, we begin to understand that a major part of our responsibility in following Jesus is to join with him in ridding the world of evil. That seems overwhelming, of course. Probably to most of us, it seems it will never happen. But gradually, the reign of God can overcome the forces of evil. You remember, "The reign of God is at hand," Jesus said.

The reign of God means God's love as the dynamic force within our human family transforming us, transforming our world, and transforming all of creation. The reign of God, the dynamic power of God's love — we enter into it. So as we try to listen to the Gospel today, we begin to understand that we join with Jesus in overcoming evil, eradicating evil from our world, our human society. As I've thought about that, I thought what is perhaps the most significant evil that is present in our society that we need to try to join with Jesus in extricating?

This week there was, just a couple of days ago, another shooting at a school. In writing about it in the paper the reporter says, "On Tuesday it was a high school in a small town in Kentucky. On Monday the school cafeteria outside Dallas and a charter school parking lot in New Orleans." Each day there was violence. This is what I think is one of the major evils in our society. "Before that, a school in Iowa, a college campus in Southern California, a high school in Seattle. Gunfire ringing out in American schools used to be rarer and shocking. Now it seems to happen all the time. The scene in Kentucky, on Tuesday, was the worst so far in 2018. Two 15-year-old students were killed; 17 more people were injured. But it was one of at least 11 shootings on school property recorded since Jan. 1."

Tuesday morning at that high school, the shooter, the perpetrator was a 15-year-old student. Children murdering children. How can that be? What is there in our society that brings about such violence to the point where probably many weren't even aware of these shootings that had happened in our schools since Jan. 1? To me, the greatest effort we have to make is to learn to follow Jesus who rejects violence of every kind, who taught people to return love for hate, nonviolence for violence, and who did that in his own life.

He was teaching not just in his words, but by the way he acted, on the cross being tortured, being executed, being shamed, humiliated — the most ignominious death possible, and he prays for those putting him to death. Just before that, in the garden when Peter had tried to defend him when he was under attack with armed soldiers, Peter takes out his sword and Jesus says, "Put it away." He rejects violence.

The earliest Christians understood that was the teaching of Jesus. You may remember the day after Christmas we celebrate the Feast of St. Stephen, the first martyr. How did Stephen die? He was stoned to death, but while he's being stoned to death he is praying for his persecutors just as Jesus did: "Father forgive them." We've had many examples. I think of something I just read in the paper a couple of weeks ago. It was an obituary about a police officer in New York City who had been gunned down, not murdered, but paralyzed.

He spent the rest of his life in a wheelchair. But he didn't spend it thinking about how to get even or hating those who did it. He began to go around to high schools and teach how to respond to violence with love, which is what he did. Instead of hating, he tried to love even those who did it. And he tried to teach high school kids that this is how we have to try to act; this is the way to follow Jesus. Back in the 1980s, Pope St. John Paul wrote a Peace Day statement in which he speaks against violence and shows the way to follow Jesus.

He had just been to the country of Ireland where he had spoken. He said, "In Ireland I said and I now repeat: violence is a lie, for it goes against the truth of our faith, the truth of our humanity." Violence is a lie. It goes against everything we are as people made in the image and likeness of God who is love. So it's a lie when we perpetrate violence or hate. St. John Paul says, "Do not believe in violence. Do not support violence. It is not the Christian way. It is not the way of the Catholic Church." If we want to be disciples of Jesus, John Paul is telling us, we must give up violence, learn to return love for hate, nonviolence for violence. He says, "Believe in peace, forgiveness and love. Only these are of Christ."

As we continue on in this year and hear the Gospel lessons Sunday after Sunday, we will be told of other times where Jesus teaches us peace, forgiveness, and love. We must listen. We must try to take the message in, let it change us so that in every circumstance in our daily life within our families, in our homes, in our neighborhoods, within our country, in our world, we can be those who follow Jesus, be those who extricate this evil of violence that seems to be overwhelming us. If we listen deeply to the Scriptures, listen deeply to the words of Jesus, we will be changed and then we can join with Jesus in this work that he identifies to us today in the Gospel. That is the task, his task, and now our task to extricate evil, drive out the demons, drive out violence, and bring peace, forgiveness and love.

[Homily given Jan. 28, 2018, at St. Philomena, Detroit, Michigan. The transcripts of Bishop Thomas Gumbleton's homilies are posted weekly to NCRonline.org. Sign up here to receive an email alert when the latest homily is posted.]