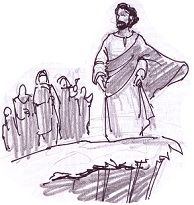 Today’s Gospel has Jesus reminding his hometown fans that prophets seldom get accepted in their native places.  One reason for this is that being a prophet means challenging the home front for its often narrow, self-focused views. The people of Nazareth expected Jesus to tout their small-town values. Instead, he declares that the Spirit is anointing him to preach to the poor, the oppressed and the imprisoned. They want him to work spectacular miracles. Instead, Jesus challenges them to declare a jubilee year of open sharing and general restitution from rich to poor.

Jesus reminds his own family and neighbors that the ancient prophets did not lavish their miracles on the Chosen People. Naaman the reluctant Aramean general is healed of leprosy by Elisha the prophet.  The widow of Sidon and her son are saved by the prophet Eijah. None of these great signs came to the people of Israel.

It was not a happy encounter, and it ends with Jesus being run out of town. Expectations are a two-edged sword. Someone either does what you want, or they disappoint. If Jesus has come to begin his public campaign with a flourish, it is a flop, and his failure in Nazareth will set a course for gradual disappointment all the way to Jerusalem, where he will be accused of heresy and civil disturbance, and eventually executed by the Romans.

This happens near the beginning of the Gospel.  Luke wants us to know that there is something unusual about this story. Jesus is not on a direct journey to glory and triumph. He will fail before he succeeds. A pattern of misunderstanding and failure will precede him as he turns every expectation upside down about what it means to overcome human sin and the mystery of death.

Lent is our time to accustom ourselves to this pattern of winning by losing, rising by falling, finding our place within this world not as rulers but as servants.  It surely troubled his disciples to hear him say, “The first shall be last, and the last first,” as they proceeded on their downward journey of loss and suffering for the sake of the kingdom of God.  Only when they are broken by failure do they begin to understand Jesus’ words in Nazareth about being anointed to preach good news to the poor. His anointing meant becoming poor himself, stripped of all power and importance as the world counts it. Both Luke and Matthew begin their Gospels showing Jesus born among the poor and living an ordinary, even anonymous life until he launches his public ministry.  We are invited to place ourselves within his story and its values as we follow him to Jerusalem for the events of Holy Week.

The ecological significance of the Eucharist

Give peace a chance