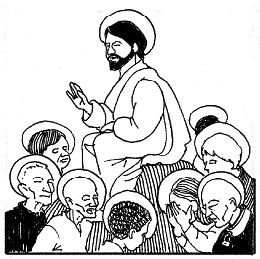 We saw in yesterday’s portion of  Jesus' instructions to his missionary disciples that he wanted them to be realistic about their reception. Not everyone would welcome them, and they should be prepared to move on, even “wiping the dust” from their feet.

Today, he tells them just how dangerous their ministry will be. “I am sending you like sheep in the midst of wolves.” Imagine the reaction of the disciples. Not only were they as innocent (dumb) as sheep, they were about to meet opponents as cunning and voracious as wolves. What chance did they have? So, Jesus added this: “Be shrewd as serpents and simple as doves.” Know when to slither away and when to use your wings to fly away.

Both modes offer some protection. Be smart. Avoid danger. And if you are caught, play dumb, know nothing, don’t give yourself away.  Jesus practiced this same caution during his ministry.  He stayed one step ahead of Herod, “that fox,” by moving out of his territory. For some of his trips to Jerusalem, he went in disguise, slept among other pilgrims in the garden of Gethsemane, or appeared in public surrounded by crowds to keep from being arrested.

Jesus spoke of his “hour,” the time when his ministry would bring him in direct confrontation with his enemies. But until that hour came, he stayed on the move to complete his work until the Spirit guided him toward the climax of his life and his death as a prophet in Jerusalem.  He was deliberate in his planning and did not rush into danger until the time was right. There is a saying that may seem harsh to young idealists, but it is the wisdom of veteran activists: “God never told anyone to be stupid.”

Today’s Gospel described Jesus but were no doubt directed at the early church during times of persecution. An “underground” church being hunted by spies and hostile regimes would have benefited from Jesus’ caution and encouragement that the Spirit would speak through them went they went before judges, and that even betrayal and threats would not deprive them of their final reward as his followers.

Discipleship requires pacing ourselves through lives that can accelerate into drama and opportunities for courage but are mostly ordinary virtue and meeting our responsibilities to one another.  The Gospel needs heroes and martyrs, but not people looking for danger or action for its own sake. Most saints are cornered by circumstances and causes they wanted to avoid but wanted even more to be faithful to principles and duty when they had no other choice.  God alone knows when this may be, but in the meantime tells us to be shrewd as serpents and simple as doves.