Who are the Apostles? 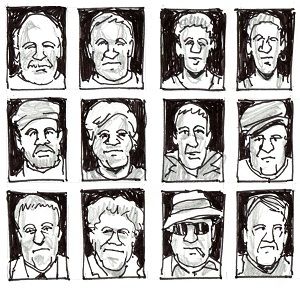 In her book Team of Rivals, author Doris Kearns Goodwin tells how President Lincoln deliberately surrounded himself with political opponents in his cabinet so he would always hear all sides of an issue. Among them were ambitious men who often failed to support him but enabled Lincoln to always know the political forces at work in the country during his difficult tenure.

Jesus may have had a similar interest in mind when he chose the Apostles. We think of them as heroic witnesses to Jesus, but before they achieved that status each one of them had to undergo a profound personal conversion. Peter is the best example: A boastful, impetuous man who fails in crisis, then emerges as the leader of the church. Perhaps Jesus chose all of them not for their strengths but for their weaknesses, so that when tested, their trial by fire would prepare them for the work of preaching mercy and forgiveness to others.

The Twelve Apostles gave the Gospel writers and early church symbolic continuity with the Twelve Tribes of Israel, but we actually know very little about them historically. This is certainly true of Simon and Jude, whose feast the church celebrates today. As the church advanced in subsequent centuries to become Christendom, authority was also symbolically grounded in the pope and bishops as successors of the Apostles. The New Testament supports this, but also reveals other traditions that were crucial to the story. John's Gospel has a shorter list of Apostles, focuses on an unnamed figure called the "beloved disciple" and gives special attention to Mary Magdalene.

In the Acts of the Apostles, when deciding who should replace Judas, the community determined that an Apostle was one who had been with Jesus from the time of his baptism up to his death and resurrection. Their principal role as Apostles, which means “those who are sent,” was to witness to the resurrection.

This only highlights in an ironic way the Gospel accounts that confirm that Jesus was also accompanied by a group of women who alone remained as witnesses to his crucifixion when the men fled, and they were the first to experience and proclaim the risen Christ, even when they were doubted by the men. They fulfilled the criteria for apostleship far better than the Twelve. Their role seems to have been discounted in the official tradition that has historically affirmed the authority of an all-male hierarchy.

Even as we honor Simon and Jude, the witness of the women, hidden in plain sight, is an appropriate reminder and unavoidable theme for today’s feast.

Column | Who are the Apostles?

How do campuses attract millennials?