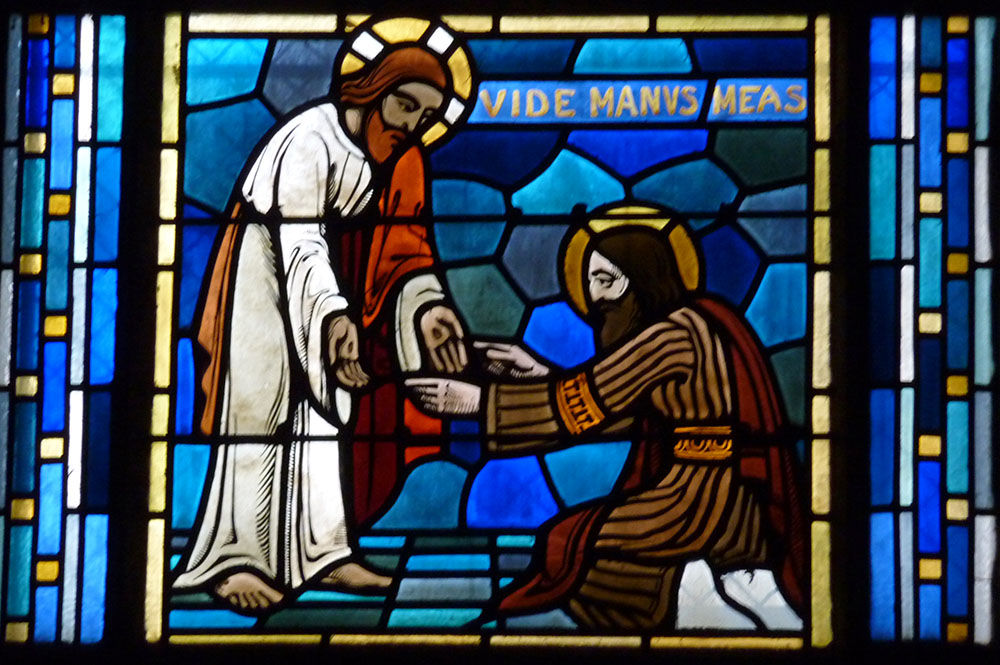 Jesus and St. Thomas with the words of Jesus in Latin, "See my hands," on a stained-glass window in Notre-Dame-du-Rosaire Church in Saint-Ouen, France (Wikimedia Commons/GFreihalter)

Doubting Thomas. The disciple whose nickname will forever define him — all on the basis of one remark.

Did you ever wonder why Thomas was not with the others on that first Easter night? A group — we know not how large — of women and men who had been disciples of the slain Jesus had gathered together in fear and confusion on the most mystifying evening of their lives. Did they lock the doors before Thomas arrived? Was he too sad or angry or ashamed to gather with them? Obviously, he wasn't completely cut off because soon thereafter somebody told him that Jesus had appeared in their midst.

Maybe someone went looking for Thomas precisely because of what Jesus did that night. Jesus had broken in on their fear and hiding, he blessed them with peace and then revealed to them the greatest power in the universe: the love that creates forgiveness.

The breathtaking thing about forgiveness is that it positively transforms the effects of the past. People whose sins are retained can be tethered forever to the millstone of their mistakes, defined by their worst moment. In forgiveness, they are freed to reconfigure (another word for redeem) what has been destructive of relationships.

When Jesus made himself part of the group gathered in hiding, he simply said, "Shalom, peace." Shalom is an insider word. It says, "I have no fear of you and hold nothing against you." One ancient Jewish teaching maintains that shalom-peace is "the only vessel God found capable of holding a blessing." The word is also a name for God.

Shalom was Jesus' first word to his friends after he had suffered. Jesus' shalom recreated his relationship with each and all of the gathered disciples. In some ways, it was as astounding as his resurrection itself. In some ways, it is identical with his resurrection because it expresses the reality that the power of love cannot be overcome. Shalom, Jesus' word of forgiveness, conferred redemption.

For some reason, those who found Thomas on another day weren't capable of communicating the whole message to him. They did well enough to get him to join them a week later, but he still didn't quite grasp the transformation that had begun among his friends — and in the history of the universe.

Then, turning to Thomas, Jesus invited them all to face their doubts as he said, "Touch me. I am no ghost. I bear the scars of rejection and abandonment. Shalom. Touch me and know shalom."

With that, Thomas grasped what none of them had comprehended. Thomas looked at Jesus' scarred hands and wounded side and said, "My Lord and my God!"

Thomas grasped the terrifying, wondrously scandalous truth that Jesus reveals that God is not exempt from suffering. Thomas realized that God's forgiveness expresses a love as vulnerable as human beings' and more powerful than evil.

Thomas reminds us that honestly facing our doubts can open us to greater faith. The courage Thomas showed in doubting allowed the risen Christ to reveal God's face in a new and fuller way. Thomas' story also demonstrates that Christ's resurrection frees us to forgive and be forgiven.

Let us celebrate and emulate Thomas as a patron of great and courageous faith.

A version of this story appeared in the April 15-28, 2022 print issue under the headline: Thomas' great faith.